As technology and social media become the forefront for today’s marketing trends, it is becoming increasingly difficult to dominate the media world and stand out from competition without spending millions.  Barstool Sports, led by Dave Portnoy, is an infamously popular brand that has found a way to stand out. In big ways.

In fact, their team created an absolute empire - drastically growing a fan base with little to no use of traditional marketing tactics.  Barstool's core marketing success is founded in their ability to make themselves the story, the brand, the product, the content, the platform, and the advertising.  In this blog, Hollywood Branded discusses in this case study how up-and-coming brands can follow 5 of the unconventional marketing steps Barstool Sports used to find incredible growth. 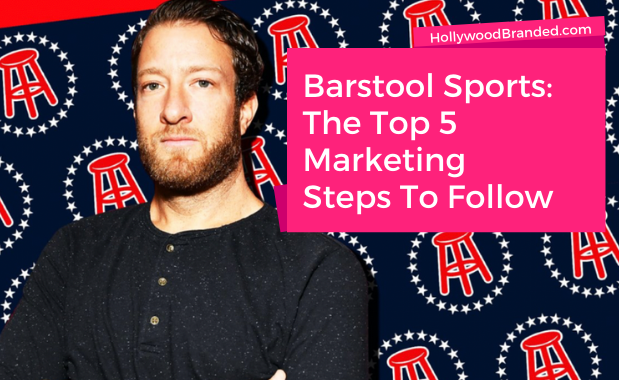 Barstool Sports is one of the most well-known media sensations of our time.  Back in 2003, Dave Portnoy launched the brand as a local Boston newspaper, recruiting the homeless to hand out copies in various subway stations.

Over the next four years, the paper transformed, gaining a more lifestyle vibe and gaining greater momentum across the country.  As new content was developed, investors took interest in the brand and its satirical voice.  In launching websites and blogs, Barstool hit a peak in 2016, selling 51% of their company to The Chernin Group, valued at about $15 million.  The empire became evident as the brand relocated to New York City, but Barstool Pres still commandeered full content control.  Without putting a single dollar into the organization, Portnoy gained a heavy following through word of mouth.  17 years later, Barstool content is still positioned to be the top performing across social media.

So, how can other start-ups take their ideas to the next level?  In analyzing the history and success of the company, there clearly five unique marketing steps that allowed “The Stool” to capitalize on the media industry. Read on to learn more! 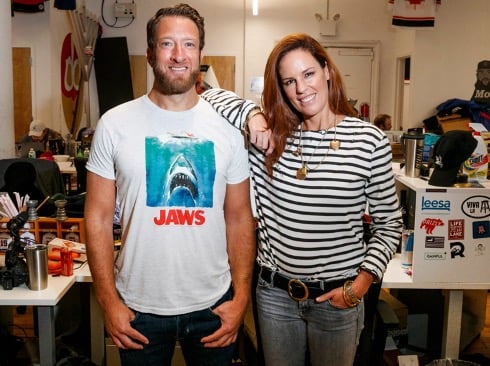 In this day and age, it is not enough for a brand to dominate just one platform or just one demographic.  The way Barstool Sports is able to dominate the media is by capitalizing on all forms of content for all-age categories.

Whether it be males, females, college students, or adults, there is something for everyone, making the brand that much more accessible.  They have especially dominated in the podcast field, accounting for about 35% of their $100 million yearly revenue.  As a top-ten publisher, they are home to about 25 different podcasts, most of which reign as Top-10 US Podcasts on Apple.  Channels such as “Chicks in the Office” and “Call Her Daddy” target a young-adult female population. On the other hand, something such as “Pardon My Take” focuses on an adult male demographic.  Aside from this platform, The Stool capitalizes on other angles.  These include pizza reviews, judging the best local restaurants, college comedy, or even just their basic website and Instagram, focusing on the latest, worthwhile updates in sports and media.

So, how can others emulate this?  How can other brands attempt to draw in so many different demographics?  The answer is within the question.

Have content for everyone.  You can’t expect female women to be drawn to your content if they cannot resonate with it.  Same goes for men.  By capitalizing on all platforms; YouTube, Instagram, Twitter, TikTok, you leave yourself limited room to slip through the cracks.  It is not easy to give everyone what they want, but  Barstool does. Creating different elements of your brand to target different populations brings in a wider fan base, and with good content, you can keep them reeled in.

Social Media is an evident part of all 21st century brands and marketing tactics.  We see almost every company utilizing a social influencer program, paying those with an ample following to use and advertise their products.  Although this is adapted by Barstool, their take to social media is much larger and effective, establishing an affiliation program.  This method allows the company to license out their name to colleges all over the country.  Hundreds of participating campuses have Barstool Instagram, Twitter, and TikTok, posting content relevant to their location and school culture.  Whether it be @barstoolrhody, @barstoolalabama, or @clemsonbarstool, they all have unique owners and a unique style.

It is  smart to recognize that the Barstool social media campaign keeps high fan engagement.  It’s as if every single fan across the United States has some sort of home or base camp to live in, all under the brand’s umbrella.   Each college is their own, individual channel with their own content creation.  Ultimately, it hooks the college demographic to Barstool without them even knowing it.  Each fan has a separate avenue to feel like they are a part of the brand, whether it be submitting their own content or seeing content they can relate to.

In adapting social media campaigns, it is beneficial to create an avenue that allows fans to engage with one another and have a platform to do so.  Not only does this method drive traffic, but allows consumers to feel a greater connection and familiarity. Unlike many other brands, Barstool capitalized on social media and but did so in a unique way.

Dave Portnoy, @stoolpresidente, has brought in an aspect of controversy to the brand, keeping readers hooked on his every move.  With an uncaring and comical attitude, he draws in free publicity for the brand through his social media “beef” and public scandals. One example can be seen in his public disgust for Peter Nelson, an HBO Sports Executive known for attempting to steal Barstool’s podcast talents.

In exposing Nelson on social media, Portnoy not only gained ample publicity, but turned a negative light to HBO.  The most noticeable relationship is the hatred between “El Presidente” and NFL Commissioner, Roger Goodell.  It stems back to the infamous New England Patriots “DeflateGate” where Portnoy staged a protest at NFL headquarters.   From then on, the feud grew.  Whether it be Barstool merch mocking Goodell to being kicked out of Super Bowl LIII, fans followed his every move and unapologetic actions.  In both instances, viral videos spread across all media outlets, exposing the face of Barstool Sports.

In the circumstances of outside companies, controversial fights or events may not be the most beneficial route to travel. However, driving traffic to your brand through free publicity in the media can be.  Using large marketing stunts is one way to draw in an outside crowd and present your name in the media.

Most importantly, brands should create an interesting, yet likeable face to associate with their company. Consumers enjoy the process of following someone like Portnoy, being able to relate with him and invest in his decisions.  In this case, we can see how Barstool Sports follows the motto “Any publicity is good publicity”. Who says that’s a bad thing? 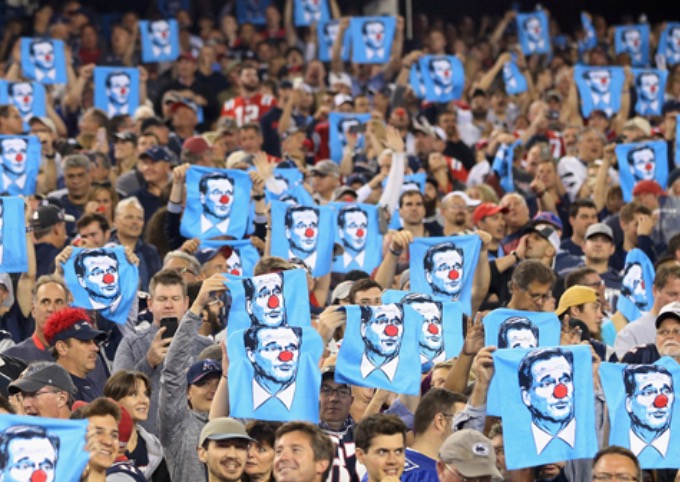 With any company attempting to gain and keep a reputation, creating merchandise is an effective way to promote.  Merchandise not only opens an opportunity for additional sales, but allows fans and consumers to become a walking billboard.

Barstool Sports proves to be an order winner in this category, speeding up merchandise turnarounds overnight.  The brand appears to thrive in taking famous and viral quotes and turning them into sellable products.  Examples of this can be seen in their “Call Her Daddy” podcast, utilizing famous quotes like “Cancel Suitman”, “Free the Fathers”, and “See You Wednesday”, creating full merch stores in under 24 hours.  In keeping the merchandise turnaround quick while topics are still relevant and trending, customers are more willing to purchase on the spot.

Not only can brands take merchandise as an additional way to spread marketing efforts, but it becomes an opportunity to create new logos and coined phrases.  As a college student, it is almost impossible to enter a campus without hearing the infamous term “Saturday’s Are For The Boys”.  One piece of merchandise, one Barstool flag.  That was all it took to coin a viral term across the younger demographic.

Whether it be Portnoy Musk 2020 t-shirts, Barstool College flags, or podcast sweatshirts, there is truly something for every demographic.  The logo became a recognizable brand name, and their merch allowed them to take every opportunity to blast their brand in the faces of as many consumers as possible.  Brands can utilize merch as an appropriate way to capitalize on their fan base and create an even stronger link between consumers. 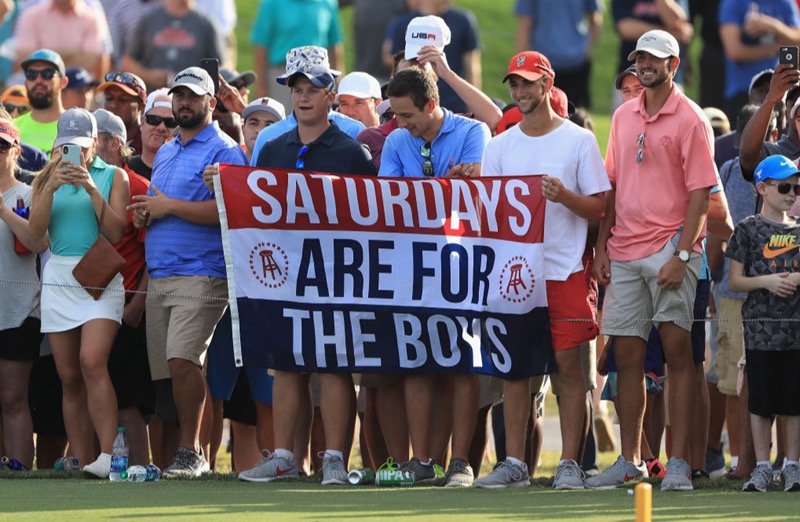 5. Partnering With Other Brands

Gaining sponsorship drives up revenue.  There is no question about it.  About 55% of Barstool Sports’ revenue comes from outside advertising on podcasts and media outlets.  However, gaining dollars from outside sponsorship is not necessarily the only way to partner with an outside vendor.  Dave Portnoy created a different method, and brought a new meaning to the word Unboxing.  In his series, thousands of businesses from all other the country send him gifts: merch, food, Patriots memorabilia, even baby chickens.  He took a basic unboxing series and made it his own, bringing a comedic element to it.  In his continuing series he unboxes live with over tens of thousands of viewers on YouTube and Instagram Live.  He is able to give brand shout-outs and free advertising, but still bring his comical and unapologetic attitude into the mix.

Looking at what he has done, there is many beneficial takeaways.  I mean yes, free stuff is always a plus.  However, what he ultimately did was drive more traffic to the Barstool platform and to himself.  In the process, he was able to create relationships with these outside brands, making them feel an even greater connection to himself and Barstool.  After the success of one, more companies and individuals from all over the country wanted to be involved.  He achieved something special; giving free advertising to others while still making himself the center of attention.  His face was plastered on the social media accounts of thousands of outside companies, advertising their products on his show.  Therefore, it is important to recognize that partnering with others and utilizing sponsorships does not take the attention away from your brand.  Instead, it creates a new relationship and the ability to spread your content further.

Whether it be through social media, partnerships, merchandise, or content, there are many ways to expand all over the media. However, being bold and unique is something Barstool Sports mastered and serves as an excellent model for other brands in creating their own marketing momentum.  Starting a brand from scratch is extremely difficult, so it is crucial to find new and innovative ways to grab attention.  It all starts with making your own story.

Check out some of our other blogs highlighting smart marketing tactics to build your brand.

Want to learn more about other businesses and their successful marketing steps? Take a listen to our weekly agency podcast, Marketing Mistakes (And How To Avoid Them) hosted by our founder Stacy Jones.  Just click below!