Holiday movies can be big hits or big misses – and sometimes the misses can become even bigger than the hits. Perhaps the greatest and most watched holiday movie ever made – A Christmas Story – became a popular Christmas classic years after its initial release in theaters.

The brands featured in A Christmas Story are now viewed by hundreds of millions (if not billions of people) each holiday season. In this blog, Hollywood Branded looks at how A Christmas Story demonstrates the potential for limitless exposure for brands who utilize product placement in movies and television as a cost effective marketing strategy – especially in holiday classics. 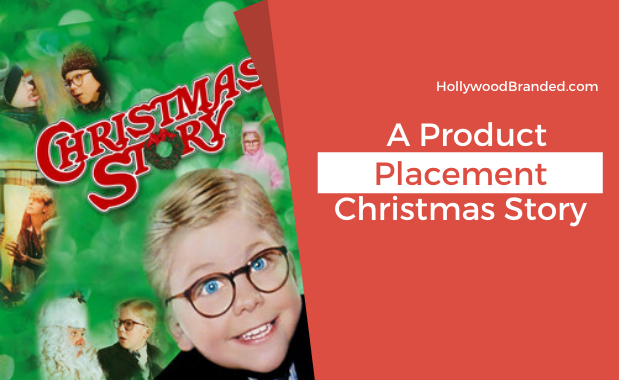 I Triple-Dog-Dare Ya Not To Watch

So, when do you plan to watch A Christmas Story this holiday season? It’s not a question of “Will you watch it?” You will. The questions are “when” – and – “how many times?” TBS has been showing this film regularly this year since Thanksgiving.  If you don’t find an opportunity to watch prior to Christmas, TBS will be running its annual marathon 24 Hours of A Christmas Story – something Turner Broadcasting (first on TNT) has done since 1997 – beginning at 8pm EST on Christmas Eve.

As someone who spent his teenage years in the 1980s, there are a lot of movies I love from this decade. This holiday classic rates among my all-time favorite films from this era. However, I must admit, I really have no recollection of A Christmas Story when it first debuted in theaters. While I eagerly awaited the next Star Wars, Rocky, or Indiana Jones sequel, this gem snuck right by me. Most of its current fans probably missed it on the first go around too. The critics loved A Christmas Story but for some reason it did not draw people to the theaters. According to TV By The Numbers, “A Christmas Story opened in theaters just before Thanksgiving in 1983, but by the time Christmas rolled around, many theater owners had stopped showing it, feeling it had ‘played out.’  Complaints were lodged, and the movie returned to select theaters and continued playing well into January 1984.” However, the film never came remotely close to the popularity it now holds today.

A Christmas Story steadily grew in popularity, beginning a couple of years after its initial theatrical release. Vanity Fair shares in a 2016 article, which included insights from the star, Peter Billingsley (Ralphie, himself), that “It first appeared on television, on HBO, in 1985, around the time it was released on VHS.” This is where the film began to take off. “It was the beneficiary of great timing, as videocassettes were becoming popular, so people would start [watching] it on VHS around Christmas,” says Billingsley. “People discovered it and began sharing it, and buying it, and ritually watching it, and it just sort of steadily grew.” And grew, and grew, and grew.

As achristmasstoryhouse.com proudly proclaims: “for one day a year, TBS eclipses everything else on cable.  The network’s 24-hour marathon airing of A Christmas Story, which begins every year on Christmas Eve and runs through the day on Christmas Day, is the most-watched program on cable for both days.” The numbers reported from this site show that in 2013 this film drew over 34 million viewers during the Christmas marathon alone.

Better Than A Crummy Commercial

A Christmas Story takes place in the 1940s and many of the brands featured in the content of this film demonstrate that they have stood the test of time. These brands have also continued to be valued for that same reason for nearly forty years due to the tremendous residual success of this film.

Florsheim Shoes makes a similar background appearance in the film. While Ralphie’s family sit and watch the Christmas parade go by, a Florsheim Shoe store prominently stands in the background. These shoes wouldn’t still be around today if they were not a quality product. At least, that’s what I’m left thinking after seeing them around in this period film. 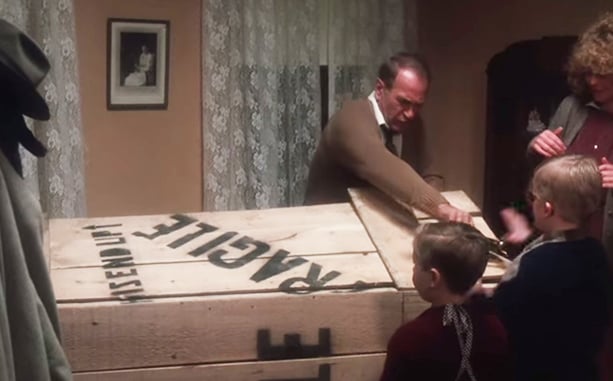 No one knows who delivers The Old Man’s “Major Award.” It would have potentially been a great opportunity for UPS, who were in business at the time. However, we do all know that the announcement of this pending prize is delivered via a telegram from Western Union – a company still highly trusted today for sending money both inside and outside of the USA.

Knowing that longevity of a company contributes to the trust of potential consumers also benefits Simoniz. What safer wax is there to use on your car than has been around since at least the 1940s? The Old Man receives a can of Simoniz as a Christmas present to shine up his Oldsmobile (a car company that lasted over 100 years before closing down in the early 2000s). I’m willing to bet that many of the fans of A Christmas Story have shown their love for the movie and someone special by buying them a can of Simoniz .

Ovaltine has the second strongest placement overall in this movie. Ralphie’s favorite radio program, Little Orphan Annie, is sponsored by Ovaltine. If you missed that fact when watching A Christmas Story, you can’t miss the clever commercial promotion that the brand creates within the story. Ralphie eagerly awaits his Little Orphan Annie Secret Decoder Ring. When he finally receives his ring and solves the code it says, “be sure to drink your Ovaltine.” A disappointed Ralphie laments, “a crummy commercial?” While Ralphie may feel he’s been taken advantage of by Ovaltine, the movie audience does not share this feeling when viewing the exceptional product placement of this brand.

You’ll Shoot Your Eye Out

The relationship between a brand and its placement in a movie is a fragile (pronounced fraa-jeel-ay) one. If the product does not feel like an authentic part of the story, the audience will have a similar reaction as Ralphie does when he solved the Little Orphan Annie secret message. The right brand in the proper role in a film actually makes the story stronger – more realistic. While most of the brands in A Christmas Story are subtly woven into the believable background, the Daisy Red Ryder BB Gun is so in your face that it’ll “shoot your eye out!” But this strategy works for the brand really well. It doesn’t always work for brand-movie relationships. It can be painful to watch when it is poorly done without tact or consideration for the natural storyline. 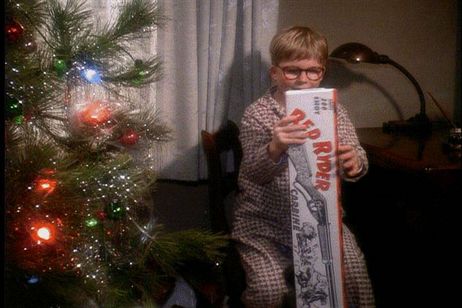 Why does the robust placement of the Daisy Red Ryder BB Gun in A Christmas Story work? Because it’s believable. As children, we all had those must-have dream gifts for Christmas. Do you remember what yours were? The one I remember for myself most vividly was the red Schwinn Stingray bike. Like Ralphie and the “official Red Ryder carbine action 200-shot-range model air rifle,” I thought about this present for months leading up to Christmas and just had to have it! We believe in the product placement  because of the skillful way the bb gun drives the plot of the movie and pulls us all in to remembering our own Christmas wishes.

The Daisy Red Ryder BB Gun is so powerfully placed throughout A Christmas Story that it becomes a star of the movie. Ralphie’s obsession for this gun as his dream Christmas present results in this product appearing either visibly or verbally throughout the entire film. Ralphie tries every strategy imaginable to try to somehow procure what he calls “the greatest Christmas gift I ever received or would ever receive.” He tries sneaking print advertisements for the bb gun into his parent’s favorite magazines in their nightstands. The Daisy Red Ryder is also the topic about which Ralphie chooses to write for his “theme” (essay) for school on “What I want for Christmas.” Ralphie even tries to outsmart and bypass his parents’ concern by going directly to Santa, “The big man! The head honcho! The connection!”

I don’t know about you, but I’m always so pulled in by Ralphie’s romanticized depiction that I often find myself wanting a Daisy Red Ryder BB Gun after watching this movie.

While many viewers record one of the many TBS showings of A Christmas Story and fast-forward through the commercials, no one pushes past the scenes with brands that appear in the content of the film.

Western Union, Simoniz, Ovaltine, and Daisy Red Ryder BB Guns will always be associated with the warm feeling we get every time we watch this heart-warming movie. Brands who understand the value of product placement have the opportunity to promote their products year after year if they find their way into the right film – especially a holiday classic such as this one. You never know what film will be the next mega-hit for years to come – the theater owners of 1983 certainly didn’t.

Interested in learning how to make a product placement program work for your brand?  Check out some of our other blogs that talk about best marketing practices for product placement and brand integration partnerships:

There is more to product placement than you may think, and our agency is always here to help you become better educated about the key tactics to best fit your brand. Download our Product Placement 101 e-Book today to start learning more!