Hit TV shows offer prime opportunities for brands to show off and promote their product. And that is no exception with Stranger Things, one of the most popular TV series currently on TV or SVOD.  And while many brands may have been a little slow to realize the power of a TV show that takes place in the 80's, other brands have found product placement nirvana.

In fact, even brands who haven't been featured in the content, but have found ways to still be associated, have seen sales success. And one brand in particular has actually seen sales (and stock) drop after their meteoric rise in popularity and sales driven by the Stranger Things storyline, after the season ended.  In this blog, Hollywood Branded discusses the effects of product placement and licensing partnerships on brand sales, with two case studies proving it works from Stranger Things. 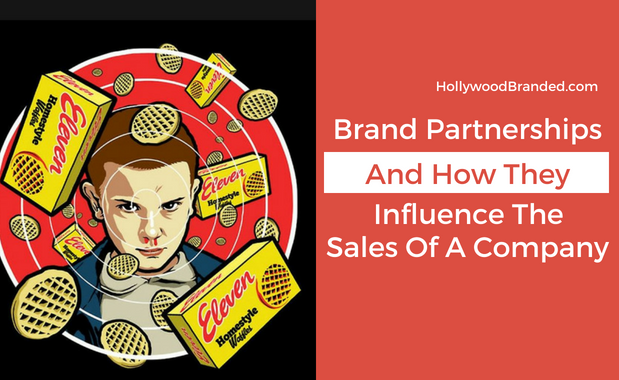 A Little Background On Stranger Things

Stranger Things is a Netflix Original about a band of pre-teens and teens who live in a small Indiana town back in the early 1980s.  The group manages to get involved in combating some extremely obscure and mysterious supernatural forces, as their friendships grow ever closer.   Part of the mystery is Eleven, who is a very unusual girl with some special powers of her own.  The series cast includes Winona Ryder, David Harbour, Finn Wolfhard, Millie Bobby Brown, Gaten Matarazzo, Caleb McLaughlin, Natalia Dyer, Charlie Heaton, Cara Buono, Matthew Modine, Noah Schnapp, Joe Keery, Sadie Sink, Dacre Montgomery, Sean Astin and Paul Reiser.

And while Netflix doesn't like to reveal numbers... they announced that "almost 16 million people watched the premiere episode of the second season of Stranger Things within three days".  And to make that even more astounding as far as the true viewership - that did not include viewers who watched on computers, tablets or phones, as Nielsen doesn't have access to tracking on those devices, nor the ability to track outside the US.

The audience tuning in to watch Stranger Things upon immediate release is just as high as any of the broadcast networks' top TV shows.  And likely has a longer lifespan with delayed viewers.

In fact, The Hollywood Reporter ranked Stranger Things as the number 2 show of the season.

Getting your brand on the TV screens of millions of viewers through product placement can absolutely help your brand increase recognition and sales along the way.  But it can often be hard to quantify that exposure, and have proof that it works.

With Stranger Things, brand partnerships - both on screen through product placement and off screen through licensing deals, have created massive sales results that are very measurable.

And one brand that didn't make it onto the screen found another way to leverage success - with a licensing partnership.

Schwinn managed to get Netflix to allow them to create a publicity stunt of sorts - with a licensed line of bikes.  If you watch the TV series, you know that the kids all ride bikes.  But not necessarily Schwinn.  And for this partnership, that didn't matter.  In the licensed partnership, only 500 bikes were made, and as fitting for a 1980's bike, you could not order it through any digital channel. You had to pick up the phone and call 1-800-SCHWINN and ask to buy Mike's Bike for $379.99

And the bikes?  Well they sold out in one week flat. 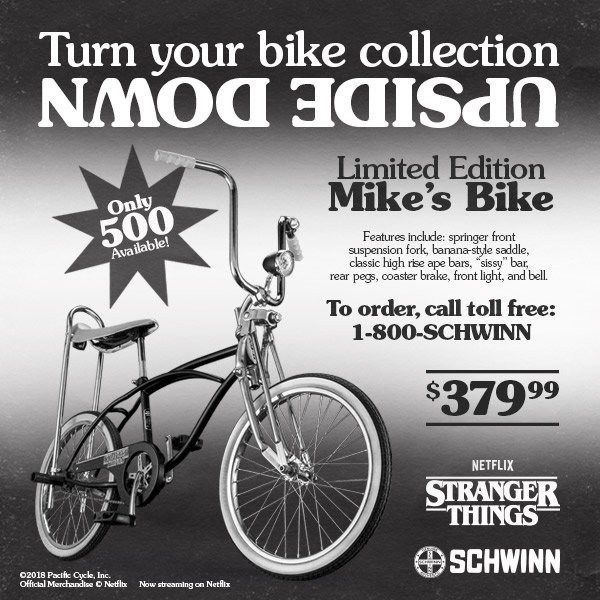 Schwinn has even produced an '80s-style commercial to promote the bike:

One brand which has been part of the storyline of Stranger Things since season one is Kellogg's Eggos, which has seen a massive increase in popularity due to their product placement.   And what has been truly phenomenal for the brand is that it was an incredibly organic storyline, that the brand did not lead - they simply gave permission to the production to use the product.

That's not always so easy for brands to do for a new TV series, with a very weird storyline.  It's a leap of faith, and in this leap, it has paid off mightily for Kellogg's. 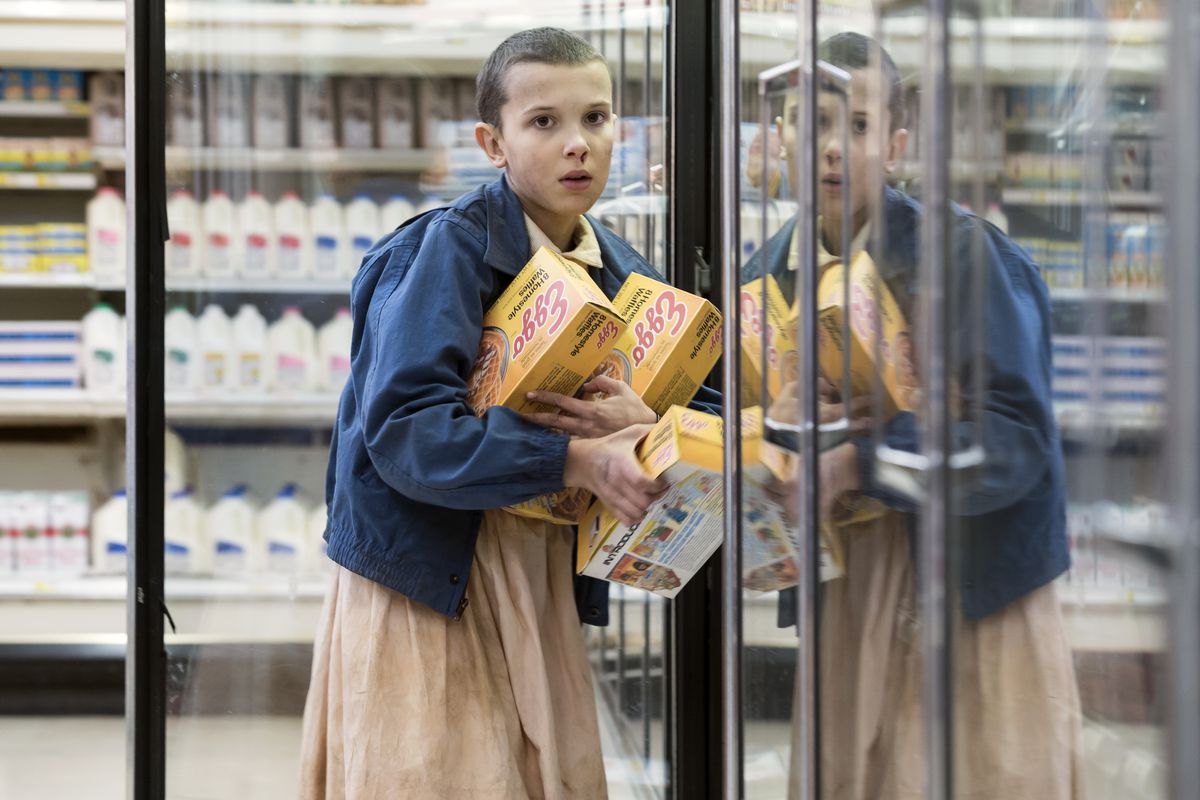 After that home run in both season one (which continued in season two) of product placement nirvana, Kellogg's team partnered with Netflix to bring in some massive grassroots marketing promotion to the mix.

So let’s talk about their creativity. Today, to be noticed you must think outside the waffle box. One idea that the Eggo team came up with was comical and downright genius. Leveraging the fact that Eleven, one of the main characters, was seen multiple times in season one enjoying her favorite breakfast food…. Eggo Waffles! the brand created a campaign to help bring more awareness to the product placement and to the SVOD series.

Before the premier of season two, Eggo released 11 different waffle recipes, to be made for the perfect Stranger Things' viewing party.  Now, this was no coincidence that there were 11 different recipes - they made 11 because the main character ELEVEN loves her Eggo waffle’s.

Two of the recipes included a cookies and cream Eggo Waffles ice cream sandwich, and chocolate covered Eggo Waffles on a stick. Eggo's is so perfectly blended with Stranger Things that the brand has become synonymous with the series.

Other than their recipes, Eggo also created a DIY flashlight, purse, and boombox - out of Eggo Waffles containers of course. They provided instructions on how to build each one of these products. We bet there were a lot of Stranger Things Halloween costumes out there... complete with Eggo Waffle accessories.

All of Eggo's hard work has paid off in leveraging their product placement exposure by helping the show's audience to become more involved with their product. But what does it to for Eggo’s revenue? Is their team's investment of both time and money worth it?

Eggos Results From Their Partnership with Stranger Things

Since Eggo has partnered with Stranger Things and Netflix their sales have boosted upward, and it's reflected in their stock prices as well.

Why is this the case? This is all driven because the main character loves frozen waffles. According to Business Insider the brand received more social media mentions in the month of October, than they have ever seen in history.

Along with all the social media mentions, Eggo saw a 14% increase in consumption. Before 2016, Eggo’s sales were on a downhill incline, but once the show premiered their sales turned right around and shot straight up.  Why? Directly because of scenes like when Eleven is seen escaping from danger, and she immediately runs to the supermarket to buy frozen waffles. T

The 65-year-old frozen breakfast food has made a strong comeback and is experiencing a resurgence due to Stranger Things. And it is a success because the partnership goes together just like peanut butter and jelly.

And how do we know for a FACT that there is a direct correlation to the product placement of Eggo Waffles in Stranger Things to the brand's lift in sales?  Now that the show hasn’t released new episodes, Eggo has seen a decline in sales. When the product is on the show their sales go up, and when it is not seen on the show the sales decline. Eggo has seen great value in incorporating their brand on the TV show.

Now they just need to figure out to do during the other times of the year when Stranger Things isn't there to provide that boost, which could mean other movies and TV shows.

Hasbro even jumped in to the fanfare by creating a Stranger Things licensed Eggo card game. 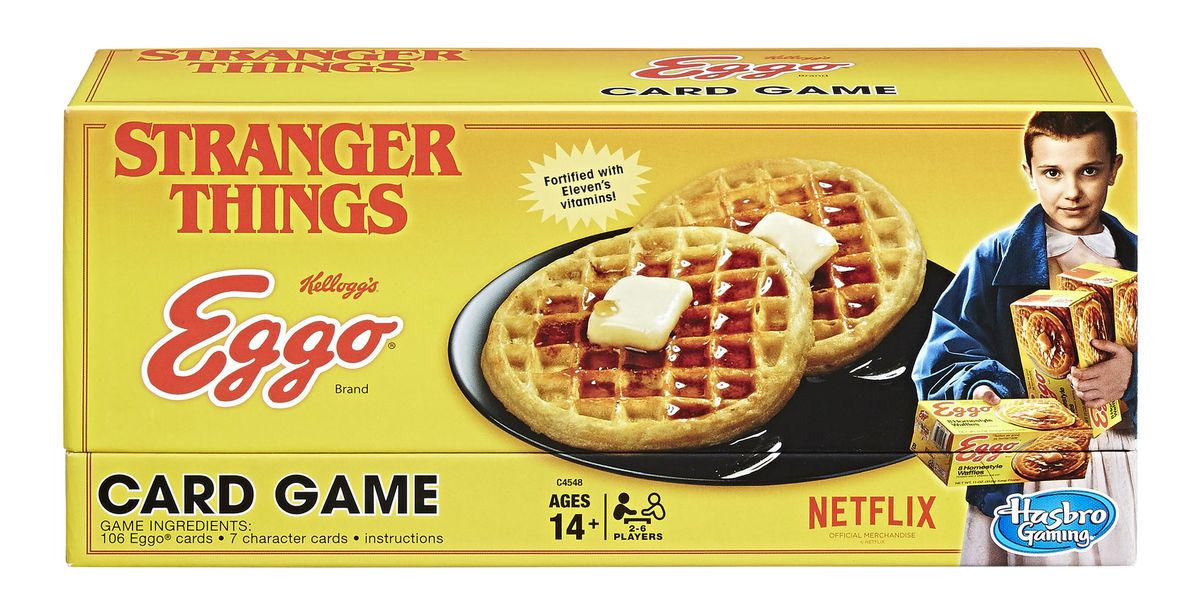 Partnering with a TV show or a feature film, at the beginning, when there are not big plans in place, can lead to major brand wins.  We've seen it time and again for our clients at Hollywood Branded over the years.  It lays the ground work for a bigger partnership to be built.  For a feature film, if you aren't in the film as product placement, when it comes time for planning a marketing campaign, it typically doesn't make as much sense to blow out a partnership with a film that doesn't have your brand included.  Getting involved at the get go, and become part of multiple series and films opens doors to much bigger partnerships down the road.

And check out some of our other agency blogs that talk about best marketing practices for product placement and brand integration partnerships:

And to learn more about product placement and cross promotional marketing partnerships, check out our e-book Product Placement & Promotions Guide 101.  And we are always here to help!