The Business of Streaming Entertainment

Everyone wants to be the biggest streaming giant in entertainment, but tracking streaming data can be tricky. Bruce Nash talks to us today about how many impressions entertainment content receives, and the metrics inside of the business of entertainment. He also lets us know what it adjudicator is, as he is the official adjudicator of movie records for the Guinness Book of Records.

Every streamer has different goals and Bruce is here to highlight on how streaming platforms track those goals. In this blog, Hollywood Branded shares about the data and numbers behind streaming platforms, and what those numbers mean. 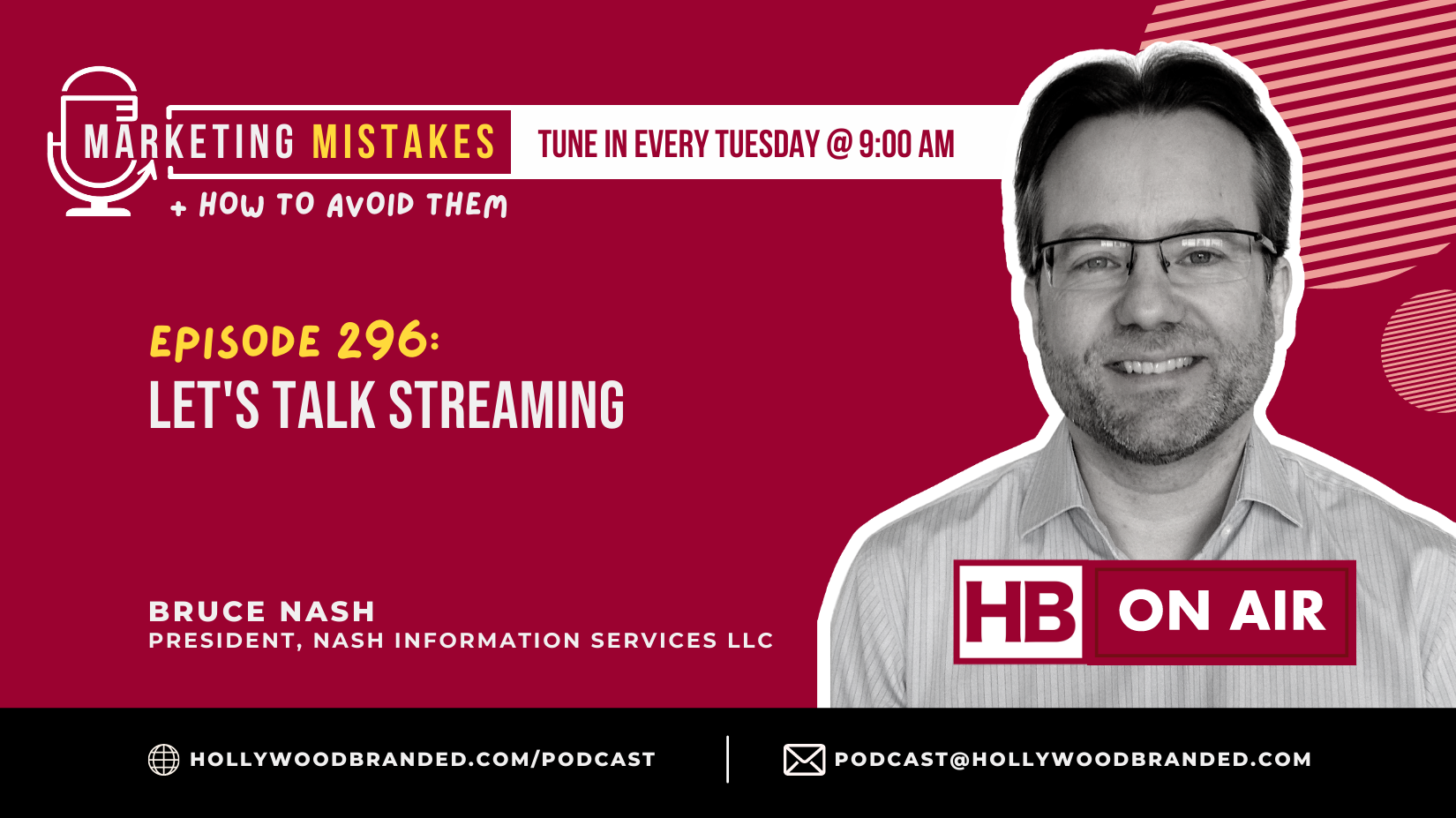 A Little More About Bruce

Bruce Nash is the founder and president of Nash information services, the premier provider of movie industry and data research services. The company operates the numbers, a website that provides box office and video sales tracking and daily industry news. Their insights include competitor analysis and international sales projections for feature films and real time tracking of the industry through its Opus data service. In the last 24 years, the company has grown to serve over 1000 client from the major studios and multi billion dollar production companies. The first time independent filmmakers, Bruce provides regular commentary analysis for media outlets, including the LA times, the New York Times, Variety, the Wall Street Journal, 60 minutes, and CBS news. His work was featured in the New York Times bestselling book, Big Data, a revolution that will transform how we live, work, and think. Bruce is also the official adjudicator of movie records for the Guinness Book of Records.

Question: What I'd love to start off with is the man behind the numbers. Literally, how did you get into this? What made you gravitate towards moving metrics?

That's a great question. So, my background is actually in mathematics, so I have a math degree. I was working in software development back in the late nineties, for IBM, actually, which was very much trying not to do anything about the worldwide web and the internet and, more or less trying to ignore the whole thing and the hope that it just kind of went away and I was living in Silicon Valley.  Everybody I was, you know, hanging out with was building websites and, you know, getting involved in, the web. And I thought, well, I really should learn something about this, so it really came from that. And the fact that I loved movies, the fact that there were really at the time there was IMDB, but there were, wasn't a website devoted to the financial side of the movie industry.

It seemed like a good way to just find out how websites were built. I created the numbers websites, and started running that kind of as a hobby. After not very long, I started getting emails from film producers saying, "Hey, I'm working on my business plan. This date is great, but I need more than this." It's not good enough to just know what was the weekend box office for these films. We need to know how many DVDs are they selling at the time. How much is the being rented from blockbuster? How is this being licensed for television and, and so on? And so that really became very quickly the, the core of the business was in helping first of all, independent filmmakers and then more and more the studios and now, you know, streamers and, you know, other, the other big guys, in trying, and to answer those questions, how is this piece of content?

Question: So your go-to people who are interested in your service typically are looking for funding for their film, their project, or ability to talk to their financiers, to explain and justify what the ask is, right?

Answer: I mean, in terms of absolute numbers. Exactly, you know, those, those are the most, at any given time we're probably working on... 10 different projects like that with our clients. We also work with, the larger studios and, streamers. That tends to be more on a database, you know? If you're a streamer, you are spending now billions of dollars on producing content and, you can afford to just buy every piece of data that we generate. So we have deals with streamers, with the studios where they're acquiring us, and then it goes in, unfortunately for me and everyone kind of goes into a back hole, right. Because they're, they're not telling me what they're doing with it. Beyond being grateful for having it, I suppose. But, I'd love to be in the room a little bit more with some of the decisions that they're making, based on all that data.

Question: So how, when you're looking at this data, you know, and obviously your sources are very good that you're pulling together, but what kind of pictures can it paint? Like what is the story that data typically tells, that you've put together? It's, it's more than just numbers.

Answer: So what we are really trying to do is to get the data, to tell us a story that we can communicate with people because ultimately, the best data in the world, isn't going to be worth anything. If you can't persuade somebody to make a business decision based on it. We look at, and a good example of this right now is the box office in the US. Obviously we're coming back from the pandemic and films are starting to come out again. We are beginning to learn what films [are] working, what aren't, people return to, theaters. Because we've spent a lot of time thinking about this and we have a classification system for movies for every movie that goes into a theater.

Question: What do you think of what's going on with the streamers in general? We just made a little joke about paramount plus, and I will tell you right now that it has some series, their comedies are phenomenal. They have really, really good shows that should, the time should get picked up, should go out for licensing all over the place. And I hope they do, but what is your viewpoint on what's going on in the streaming landscape?

I do a class at a film school and, obviously this is something that the students are extremely interested in. I always start out with a slide where we go down the streaming platforms and talk about what is the business goal for this company that, runs this platform. It is actually different for every single platform. In the case of Netflix, their goal is to get you to subscribe again, next month, they want your credit card to be charged successfully in 30 days time. That's their business model. If you are Disney, your business model is getting people into theme park because that's where Disney really makes its money. They want to build these big brands that can become, essentially theme park attractions...Star Wars and Marvel and Pixar, and so on. If you are Warner Brothers, it's a little bit more of a difficult question, to sort of figure out what their business goal is, and not to be left behind. I think that's what their scramble is...it's not the best business goal, but I think that might be what they're trying to do.

Question: Yeah, it's fascinating. Well, Bruce, how can people find out more about the numbers and all of your resources and your subscriptions and all those good things. If they're like me who are like data friendly, people who just hunger for numbers?

Answer: Well, if you go to the numbers.com, then you will find all of our box office tracking and our DVD and BlueRay sales tracking. We put up the Netflix daily, top 10 there. That's our free and for consumer use, our data services are through data. If you go to data.com, sign up there, then we'll set you up with a trial subscription. That's mostly for people who are really in the big data world. So it's available via API, and we're expecting to be working with people who are in the software world.

Bruce had so much great and valuable insight on the world of streaming and the data behind it all. To learn more about what we chatted through and to listen to the full episode, click the play button below.