The Art of the AirDrop

How Technology Can Drive Engagement

With the advance of recent technologies, we have all witnessed new, interactive forms of advertising in the past few years that we couldnt have dreamt about decades ago. Some interactive, groundbreaking campaigns might miss the mark, but there is somehting special about them when they hit the mark.

Recently, our CEO Stacy Jones sat down with an award-winning creative who continuously pushes the limits of technology.  In this blog, Hollywood Branded shares highlights from our recent podcast episode "The Art of the Airdrop" featuring the Executive Creative Director of Jam3, Adrian Belina! 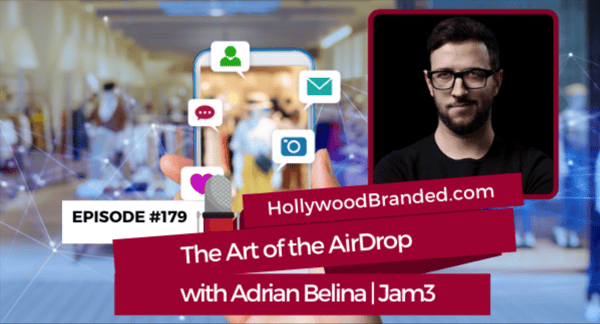 A Little More About Adrian

One of the 3 Founders, Adrian has been helped bring Jam3 from a 3 person studio in the hay days of Flash into one of the world's top digital companies. With 75+ people now across 3 offices in Toronto, Los Angeles and Montevideo Jam3 continues to create some of the most iconic, innovative and ground breaking work of its time.

Adrian has been recognized several times at Cannes, the One show, the D&AD, the Webby’s, and is in the FWA Hall of Fame. He has previously sat on the Board of Directors at the Advertising and Design Club of Canada, has been a creative judge at the One Show twice, the Webby’s, Ciclope, the Marketing Awards, Communication Arts, FITC, and more. His creative and leadership can be found in projects for Adidas, MTV, Google, Facebook, Microsoft, Spotify, Disney, Lionsgate, Lexus, Toyota, The UN, and the National Film Board.

Question: I'd love to start off with your sharing a little bit about your background and what got you to where you are today.

Answer: For sure. Happy to talk about that. My background stems from advertising. I took advertising at a college called Sheridan College outside of Toronto. Then I took a another post grad after that called interactive multimedia and it's sort of an important time because that's where I actually met my two partners, Mark and Pablo. That second program was initially geared towards web development and I was coming in with a creative background. So at the time this was maybe 2000, 2002 or 2003. I had gone in there with the idea of as a creative who wanted to kind of add this level of technical expertise or technical knowledge and bolster that up. So I could be this ... what I like to think of as the perfect ideal candidate for a job, somebody who could design and develop something.

Similarly, that's what my partners were thinking as well. What's interesting about that is that we started Jam3 shortly after that and our focus was always on this merger of design and development, which later kind of became to be more so focused on, let's say, creative technology. Focusing on how creative you could push the limits of technology. Initially this was online and then online now has transformed into the bigger world of digital, which encompasses pretty much everything, right? So online platforms, it's the retail experience, it's what you can do at an event and so forth.

Answer: I think the easiest case example, and the one that probably everybody who's familiar with augmented reality might think of their head is the Ikea app, taking furniture or a product and being able to translate that product and envision it in your living room. That's a great case example. Another one is just as something as simple as the measuring too. All of that encompasses augmented reality. When you think of a misuse, I don't like to criticize, but if I could make something up, it would be ... let's say a Snapchat mask for a brand that really doesn't have affinity. So regardless of how cool the mask is, for example let's say, a toilet paper brand, no matter how cool it is, people aren't going to want to do that or you're probably going to have a lower sense of engagement there.

I think the most important thing there is really when you think about technology like augmented reality or virtual reality, machine learning, artificial intelligence, all the things we hear about right now that are top of mind, it's not just about exploring the technology. It's really always trying to find out what is this going to do and how can this actually solve a problem for us?

Question:  What are some of the campaigns you've worked on that you think have melded the perfect world of experiential, most likely, since that's really what you dive into, and digital and technology?

Answer: I think one of my favorite case studies from just this past year was for Adidas and it was during an event called ComplexCon. ComplexCon is a two day event in long beach every year... It's like the coolest of the cool. A lot of people use it to launch new products and drum up a lot of hype. If you've ever seen a store with a whole bunch of kids waiting outside out in the line for it, outside of a Footlocker or Supreme or something along those lines, that's basically the market that goes to ComplexCon.

Adidas's tactic this year was this whole idea of avoiding lines. Lines are integral to this culture. There will be a sneaker release and to get this limited quantity sneaker, you'll have people camping out overnight, sometimes multiple days. So one of the things we wanted to do is kind of take out the power from the resellers who kind of dominate the game and we want to make it a little bit more democratic so that everybody has the same fair chance. It's not about waiting in lines. And really waiting in line is kind of a negative brand experience, right? So instead, we regulated it and so we created basically like a conference wide experience. We ditched the booth altogether and instead we had these five giant cubes that were hanging from the rafters spread out across the convention center.

What you would do is you would scan the cube to basically unlock a sneaker. We did this by creating a custom app that went and fit in right into ComplexCon's actual app.They were using the same app that they already had to get into the event, because that's a barrier for engagement.

For two days, every hour we dropped a limited pair of seekers. Sometimes it could have been one pair of shoes, sometimes it may have been 250, but people wouldn't know what was dropping and how many there would be. It was wonderful. You had these five cubes, there was nobody standing around them, and then about 10 minutes close to the hour, you'd start seeing people kind of petering in. By the time it was one minute to go, there was a big crowd and it was the calmest crowd you'd ever seen. 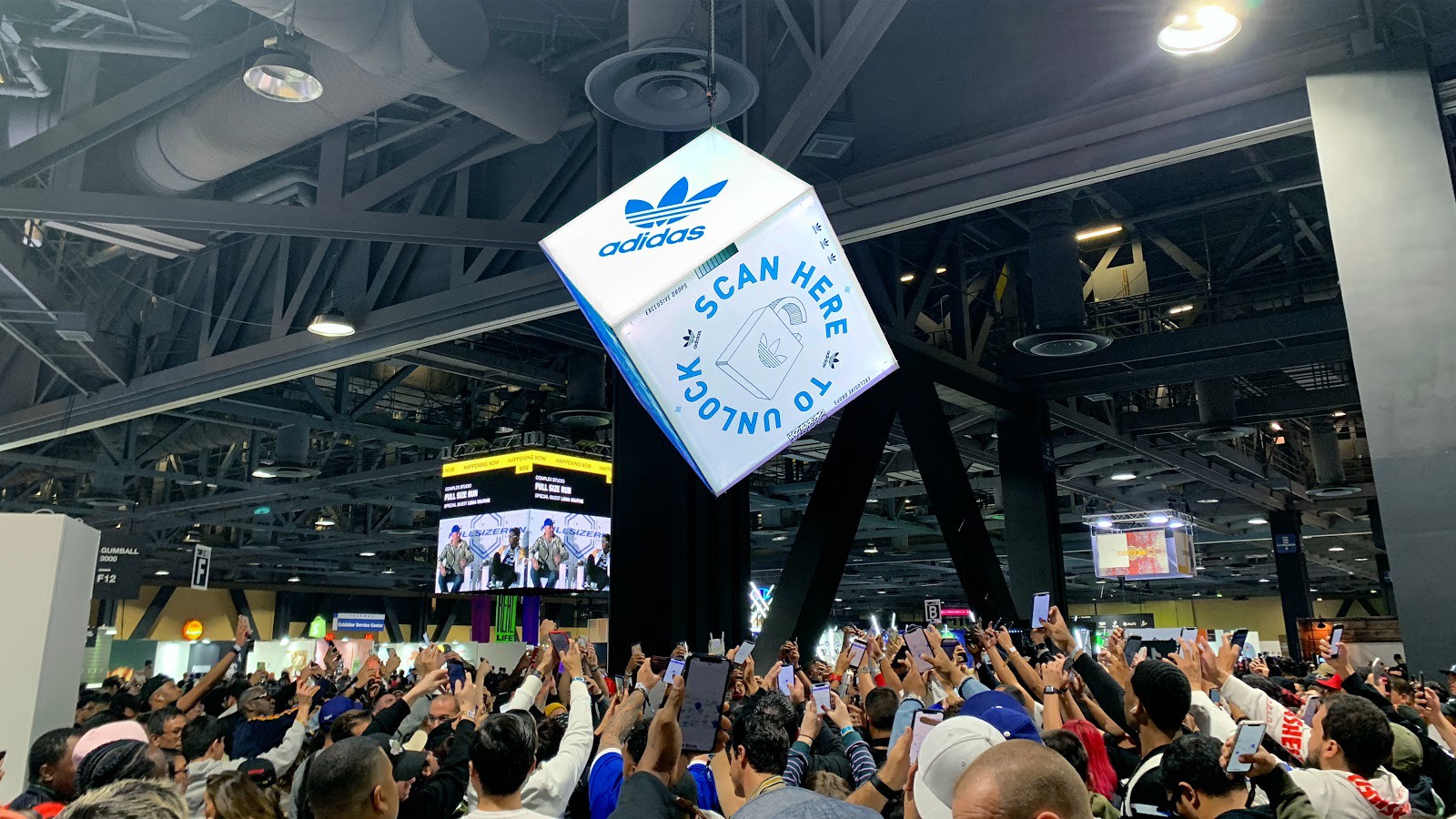 Every time we did a drop it would be done in about a minute and a half. So instead of people waiting four hours, they were now waiting a minute and a half and anybody could have a shot at this. I mean it was so wonderful to see this little 15 year old kid win one of these limited pair of shoes that they normally could never get. The look of joy in this kid's eyes was amazing. The augmented reality part of this sits within the box. So when you scan the box or the cube, the cube would actually open up and it would reveal a sneaker inside in augmented reality, not in real life.

The other interesting part that we did here is that we ditched the lines another time. Instead of having all these people now have to go through fulfillment and waiting in line for two people to sit there and give them their shoes, wait for it to come back. We used 500 smart lockers. These are the same type of lockers you might see for Amazon pickups. They were Adidas branded and each locker would have a pair of shoes in it. They could go at their own leisure, they'd hit a button on their app, the door would automatically open, they'd grab their shoes and walk away. It was pretty awesome.

The whole thing was literally so seamless. For us it was a matter of returning the conference back to them. So it was like, "Hey, our gift to you is time. Now go spend your time and if you want, wait in somebody else's line or go see the artists that you wanted."

What About the AirDrop?

ComplexCon wasn't the only event that Jam3 and Adidas made waves with the use of technology. This past year at Coachella, they airdopped a pair of shoes during Childish Gambino's set! Can you imagine what it would feel like to look at your phone and see this?! 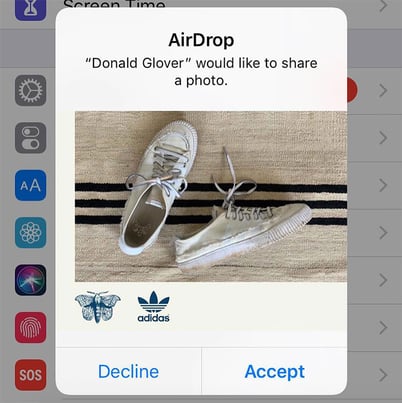 If you want to hear the story behind this one, check out the full episode below!