The Secrets To Successful Brand Partnerships

Partnerships From A Production's Point Of View

Brand partnerships are our thing. That's what we are known to do, and many members of our team have loads and loads of experience doing just that and working in the entertainment industry.

So, recently, our CEO sat down and chatted with one of our colleagues to share her experience in branded entertainment and discuss the production's perspective of brand partnerships.  In this blog, Hollywood Branded shares the secrets to securing a successful brand partnerships from the expertise of Rachel Wagner, who is the Director of Brand Partnerships at our agency. 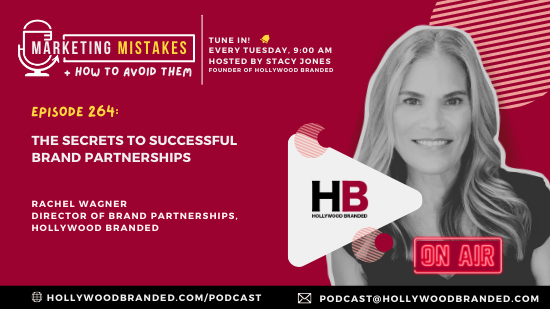 A Little More About Guest

Rachel is one of our team members at Hollywood Branded. As the Director of Brand Partnerships, she helps lead our team and create strategies and activations for our client partnerships. She has 25 years of experience in the entertainment industry and has worked for companies such as Dick Clark, Disney, ABC, and Fox Sports to create campaigns for brands like Samsung, Coca-Cola, Nestle, and FCA.

Question: Well, so it's not that often, that we bring in a Hollywood Branded team member. Occasionally, here and there, but I'm really excited today, because you have such a different level of experience and way of looking at things. And we have the same number of years of being in this industry, but you more so have been on the production, and the studio, and distributor side, versus working on the agency and brand side. So I'm looking forward to diving in, but can you start off and just share with our listeners, how you got to here today, that you are brand building maker, queen of all things?

Answer: Absolutely. I actually really started in traditional media, selling spots and dots on cable networks, local and national. But I did that in sports, and in sports is really where, I feel most of us cut our teeth in product placement, or branded integration, or whatever it was called back at that time when I started in this. I mean, taking a page from NASCAR. That's what we did with everything from, the Lakers, the Dodgers, to the Canes. So it was really nice to be selling, such marked key properties, and at that time winning teams. So it was fun finding different ways, to integrate brands outside of just slapping on logos, around the court, or getting t-shirts on fans with logos on it.

So I had a lot of fun getting creative, working with the studios actually. And finding ways to drive box office, beyond just running a commercial within the game. Being in LA, it was pretty easy to get talent, go to a Laker game. And we would have our sideline guy interview them. Nobody knew that that was the studio paying for that interview, along with their very robust media buy. So we just found really fun ways, to work with the entertainment industry and find ways to really create it, so that they were a part of the content, and they could just promote their movie in drive box office that way.

So from there, I was still kind of more in that media space, and really just getting tired of living and dying by Nielsen every single day. And I was fortunate enough to really shift into this true branded marketing space, when I went over to Dick Clark, where I was able to work on such amazing tent-pole award shows, like American Music Awards, Academy of Country Music Awards, Golden Globes. Working in so many different genres was great, and each show had its own personality, obviously, being in different genres.

So we're finding ways to work with brands where we could, once again, make them more a part of the content. So I had J.Lo dancing in a Fiat, one year at the American Music Awards. For years, it was the Coca-Cola Red Carpet at the AMAs. We also incorporated Coca-Cola into Dick Clark's New Year's Rockin' Eve. And then found ways to also work with FCA on Golden Globes. And highlight some of their more luxury cars with, showing stars arriving in a Chrysler. And again, that was all paid for, everybody at home I think just thought, "Oh, that was the car the Limo company just happened to send." But no, Chrysler paid for that too.

So that was really where I did a lot of my work in branded entertainment, and then was able to parlay that into going out on my own, and consulting and working on a variety of different properties, events, did a little cars marketing. And then was over at ABC, where I jumped back in to the kind of live shows on the Oscars, American Idol, but then really had so much fun working with the team at Jimmy Kimmel Live. And working with Guillermo in creating these branded segments, that would run within Jimmy Kimmel Live.

Question: I know the answer but our listeners don't necessarily know the answer here, but are there certain categories that are more likely, to be able to create these really cool offshoots, versus being dependent on leading with the media?

Answer: Yes, there are. And I would say, especially in this instance, when you're looking at something more event based too, alcohol is a big one. Spirits category is huge, and they love these types of things, because they are so limited what they can do on broadcast TV, or any TV these days. So, that category was all over these opportunities, and then beverage too, even non-alcoholic beverage as well. But then we also could go out to smaller and more niche brands for these things, where we maybe wanted some added value too.

So if we wanted to have a makeup stand with a makeup artist doing touch ups, as people were coming in from the after party, we were able to go out and almost provide that service to everybody going to the after party, make a little money, but more than anything, it was just a cool thing to have at the party. We had different entry points, and for different categories, who didn't either have the budgets to be a part of a big media buy, or had limitations, like in the spirits category.

Question: From your work, mainly on that distributor side of it, how do productions approach brand partnerships? What are they ideally looking for? Where is the benefit to them?

Answer: Well, money. There's definitely a monetary benefit to it. I mean, if you have the right type of partnership, it really benefits the production company, because those partnerships will help drive tuning. I mean, having a whole promotional plan, behind all of this integrated product, really helps drive viewership. So those are really kind of the two drivers coming on the distributor side. You do want to make what is considered ancillary revenue, especially at a production company on the brand side, but you also really want to make sure that you get the eyeballs, because without that, without American Music Awards viewership going up year to year when that licensing deal is up, you might not be able to renew it with the network. And that's where the bread and butter is. So finding ways to partner with brands, to really piggyback on all of their marketing, and help promote the show.

Question: And what can the brands do with, they're on, they're doing an event activation, or they are actually in the show, what typically would the allowances be for them to repurpose content, or extend content? How would that all work, or is licensing so strict and tight that once they're in the show, that was it, or how did that roll out?

Answer: In the beginning, it was really rocky, because there was such a social media tie. What was happening is that these brands were just starting to push that out, so there were a lot of cease and desist letters that happened. So we had to come up with a plan for that of how we could allow them to share on this socially, and we learned, if they actually were pushing it out specifically from a property handle, they could get away with that. But if they wanted to actually put it up on their website, they wanted to use it, if it was retailer, use it in store or something like that, then I had to work with business affairs and come up with some sort of licensing agreement, where we would take that piece of content, package it up for them and get a fee for them to use it for a certain amount of time.

The reason we could sometimes get away with them pushing it out from the properties handle is because there is a promotional timeframe, to promote the show. So if we could get it in that promotional timeframe, we were safe, but of course, the brands wanted to use that content beyond, I think it was a 30 day timeframe. So we would come up with a licensing deal, which was great, because that just meant more revenue for the production company, because that revenue goes directly to the holder of the IP. There's no network splits or anything like that. Not usually.

Question: Rachel, if we can dive in, you don't have to tell tales, but where do brands mess up, where do they make mistakes? Where are they approaching these brand partnerships, where they're really not doing it right?

Answer: When they fail to realize that, this is really a branding play. That they cannot shove all of their messaging points into this branding play. That's where they mess up. And there have been times that they try to do this, despite pushback from writers or producers who they don't want that in their content. They don't want to hear every benefit that VSA has to offer their clients. We don't need to know the APR's and the great percentages that they're getting, and all of these things. Yet, they try to get it all in, and so, it's that delicate balance of pushing back.

But there have been times where despite the pushback, they push hard enough and we still will get of those messaging points in, and it falls flat. It just does. There's no way that you can get it in. And a lot of times these types of things work more on the comedy side, and you just lose the cadence of the comedy, of the show. So it's not just a mistake for the brands, it ends up being mistake for the show too. And then nobody wins.

We always release a new podcast featuring guests with so much knowledge about marketing, you don't want to miss one!  How can you make sure you don't miss an episode? Click below to subscribe!