For those of us who have been addicted to YouTube, or those who have just found the platform during quarantine, know the name: David Dobrik. The 23-year-old looks like your average adult male: long hair, brown eyes, funny, and social. However, his multifaceted talents and creative strategy is how he was able to create his insanely popular platform.

Before COVID-19 trapped us all away in our houses, David would post new videos weekly to his channel. However, what makes each of the videos worth watching? The people, the content, and a short run-time of 4:21 (four minutes, 21 seconds). Whether it be sponsored giveaways, playing pranks on his notorious, ‘Vlog Squad,’ or helping out his friends or community, David Dobrik knows how to pay it forward. In this blog Hollywood Branded discusses why brands should partner with YouTube Stars, like David Dobrik. 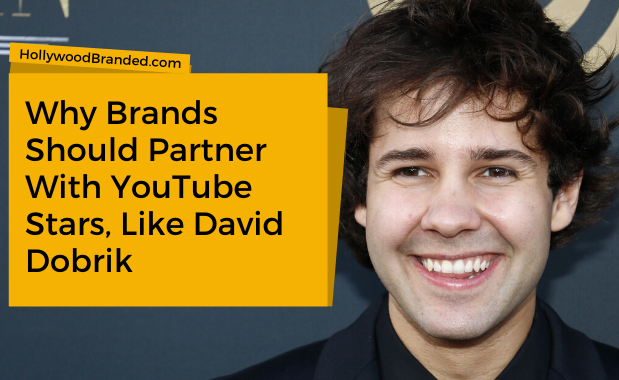 Some Background On Mr. Dobrik

David is a celebrity, influencer, and perhaps most well-known as a YouTube personality. He first began to gain popularity in 2013 when he uploaded his first comedy video to the then-popular app, Vine. He then began to collaborate with other Vine stars such as Jason Nash and Liza Koshy who helped him get traction and attention on Vine and other social media outlets. During the Vine-craze-era, David was able to gain 1 million followers on the app.

However, in 2016, Twitter announced that they would be ending the use of the Vine app (If you are like me, you were sad and locked yourself in your room for way too long of a time). But this was a blessing in disguise for Mr. Dobrik. His popularity only continued to flourish. Now, he is one of the most popular vlog-style YouTube accounts with his Vlog Squad, as well as making appearances in movies, television shows, and becoming a top-pick for companies as a celebrity endorser.

David’s Vlog Squad consists of 16 of his best friends. The Vlog Squad can be found in all of his videos getting pranked, helping him in a skit, or receiving a brand new car. However, for brands, members of the Vlog Squad are another way to create celebrity and influencer marketing campaigns. Through David’s vlogs, members of his squad have also become popular names themselves, as well as creating their own fan base and having millions of followers on social media. Through the Vlog Squad, brands don’t necessarily need to go through David Dobrik to be featured on his page. Perhaps a more cost-effective way. 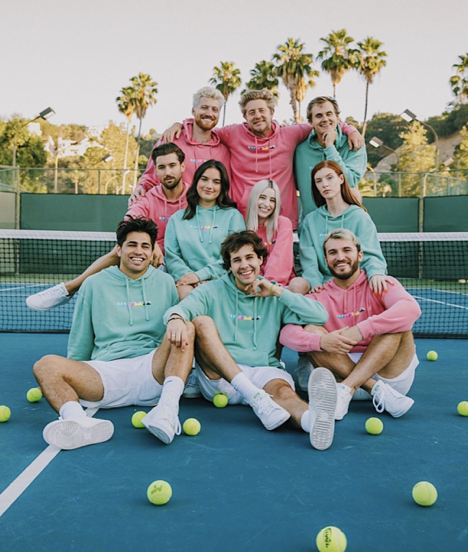 *Some members of the 'Vlog Squad' are not pictured*

Another reason why brands should focus their attention not only on David Dobrik and his Vlog Squad, but other YouTube creators, is that younger audiences gravitate towards YouTube more than ever. In fact, 81% of people in the United States between 15-25 years old use YouTube.

YouTube has almost become the new Google search engine. The younger audience would rather watch a video on a morning skin routine, how to build a desk, or just watch for entertainment rather than having to read a long, hefty article.

YouTubers are relatable and connect with different audiences and is a great platform for brands to create partnerships and market their company.

A Loyal 17.3 Million Subscriber Base

Okay, now I have to go a little fan-boy for a second. David Dobrik is by far my favorite social media celebrity. The way that he engages his audience makes every second of his video memorable, makes his content relatable, and his message is what I believe has pushed him to the star that he is today.

Before the whole COVID-19 outbreak and mandated Stay-at-Home orders, he would post new videos on his channel every Monday, Wednesday, and Friday. And, let me tell you- I would spend time constantly refreshing the page until I saw that a new video was posted. Would it be a video of him surprising a student with $20,000 or him giving his friend or even a stranger a new car?

What makes a unique creator; someone who is not afraid to showcase who they are. Sure at times his content is scripted, but that really doesn’t matter because it is either still relatable or just purely entertaining. He isn’t embarrassed, or at least it doesn’t seem like it, of filming videos of his shenanigans and posting it for the world to see. Come on, how many of us haven’t dropped Mentos into a bottle of Coke to watch it explode?

That number is the sweet-spot for David Dobrik. Each video that he uploads to his channel is exactly four minutes and 21 seconds- short enough so the viewer doesn’t feel that the content is dragging on, but long enough that viewers crave more. Each video is like a cliff-hanger. It makes you keep coming back for more.

Yet, within that small amount of time David is able to change someone’s life, forever. Whether it be a member of his Vlog Squad, students, or even strangers; he is able to help those who mean the most to him or those who need it. It is something that when you are watching, you can’t help but smile.

On, May 14, 2019, David uploaded a video to his channel titled, “PAYING OFF BEST FRIENDS COLLEGE TUITION!!”  David flew to Illinois, his home state, to surprise his best-friend, Alex, for his college graduation. Without David’s help, Alex would’ve needed to pay-off his college tuition post-grad. However, in the video David surprises Alex with $25,000 so he doesn’t have to worry about his student debt.

Now is the point where I am literally smiling and getting a little teary-eyed writing this.

Okay, back to this blog. This is just one example of how David Dobrik has helped those around him. However, his message of paying it forward shines in all of his content. I think that is why people are drawn to his channel, and why brands should be too. The simple act of being grateful is something that social media is lacking currently. But David has found that niche in the market and has created something very special through it. How awesome would it be for a brand to not only be able to create a marketing strategy through this, but also be the reason as to why someone’s day or even life is getting just a little bit easier.

David Dobrik is able to make other’s feel special, like he did with Alex, through his celebrity endorsement deal with SeatGeek. Like David says in his brand-sponsored videos, “SeatGeek is an amazing app that helps you buy tickets in the easiest way possible.”

What is unique about his relationship with SeatGeek is that he does not keep the money he earns for himself. He said, “I made the decision early on that I would never pollute my main channel with a brand deal, where I didn’t use the money to actually make the video.”  And that is exactly what he does with SeatGeek.

SeatGeek has sponsored numerous videos. However, the videos they sponsor continue to align with David’s message of paying it forward.

Here are just a few of the Celebrity Endorsement videos with SeatGeek:

However, SeatGeek is not the only brand that David endorses. More recently, videos on his main channel have been sponsored by EA (Electronic Arts).

On April 24, 2020 he posted his first video since the start of COVID-19. He explained that he received numerous messages from his fans saying that they have been affected personally or financially by the virus. David, in classic fashion, wanted to help. So with the help of EA, he tried to make people’s lives just a little bit better.

David and members of his Vlog Squad drove around Los Angeles and gave people of all ages iPads, Xbox’s, PS4’s, Frisbees with $500 taped to them, and t-shirts with checks for $10,000 wrapped inside. All products were disinfected, of course.

Even YouTube Stars Are Transitioning Over To TikTok During COVID-19

David and the rest of his Vlog Squad have had to take a break from filming vlogs and posting them due to the on-going COVID-19 pandemic. David has only uploaded one video in the past two months. Why? Well, he, like all of us, are taking part in social distancing.

This is impacting his content creation and engaging with his viewers on YouTube. BUT, yes there is a but, in the age of social media and content creation, it is somewhat easier for David, and other influencers, to stay engaged with their audience through different mediums- especially on this new, creative app. Can you guess what that is? TikTok.

Almost all of his followers have transitioned over to TikTok to watch him. He currently has 17.3 million followers on the app. He is still creating his own content, but also taking part in the viral TikTok trends and partnering with other influencers on the app, like Madison Beer and Adison Rae.

Most recently, David signed a one dollar bill, wrote the message, “Cherry Soda” on the back, and sent the dollar into circulation. But what’s the catch? David posted on his TikTok that whoever found the one dollar, made a TikTok video with it, would get $10,000. Six days later, he changed another person’s life. As a brand, you could not only partner with David on his YouTube for these types of videos. Now, you could also endorse these types of videos on TikTok. David said in an interview with Elite Daily, “I feel like it’s just an easier place for me to be able to connect with people that are watching my videos.”

Everyone, whether you are a fan of David Dobrik or not, can learn something from him and the platform that he created; it never hurts to pay it forward.

His unique storytelling techniques and message showcase who he truly is. Just a genuine, trust worthy man with a big heart who likes to capture it all on video. How would brands not want to partner with this creative genius? Not only is your brand getting marketed, but it is endorsing a celebrity with no questionable past, die-hard fans, and someone who is known for doing good.

He knows how to engage his audience, create meaningful and funny content, gets to the point, and partners with companies for the right reasons.

If you are in need of a new show to watch, don’t go searching across streaming platforms. Go onto YouTube, type in David Dobrik, and you won’t be sorry! I promise. And as for brands, watch his videos and you will immediately see how you would be able to sponsor a video or use product placement not to only enhance your brand, but further the life of someone who needs it.

Check out other blogs written by our team about social influencers and partnerships:

Want to learn more about how Social Media Influencers can help your brand? Check out our awesome guidebook!