Film and television has the ability to take you into a whole other world, whether it be back in time, to a make-believe land, and everything in between. But who is behind that magic? A part of that answer is the set decorators. We sat down with Dorit Hurst, set decorator and industry professional to find out what her job is like, how brand integrations work on set, and more:

1. How would you describe your typical workday as a set decorator?


DH: It usually starts off really early. I’ll probably wake up at about 5 and make sure that I’m at the prop house when it opens at 6. It depends on what part of the film we’re in, but usually I stop in the morning and then I have to get to set if we’re shooting at call time so that I can open up the set and make sure that everybody is happy. While I’m there, if there are any sets to be dressed, then I will dress the sets and then I will typically end my day shopping again. Usually in the morning I will shop for prop houses because then I can get orders together, and my guys can go pick up those orders, and then at the end of the day is usually when I do Bed, Bath, and Beyond kind of shopping at stores.

2. What set have you designed that you are most proud of?

DH: I think it was for Mob City, it was Jasmine’s apartment because it was a period television show and when I walked into the set it felt like I was transported into another time. It was from the 1940’s so some of the pieces were from the 1930’s because you wouldn’t just have all brand new stuff. Everything was old – down to the makeup and the postcards – everything was really fun to find and to place in her apartment. 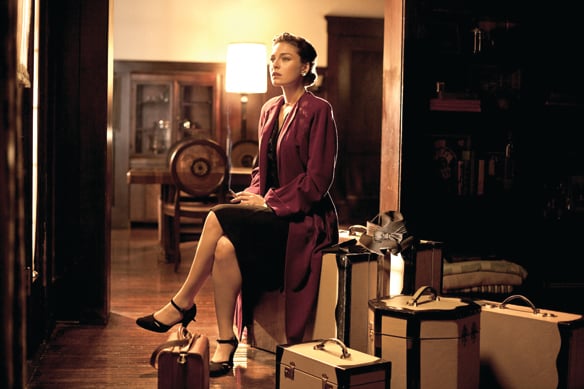 3. What do you find most enjoyable about your job?

DH: There are too many things! I think my favorite part is actually opening up the boxes of the things that I have rented and actually placing them on the set. Dressing the set is my favorite part because you have your crew around you too and most of the other parts of the day I’m typically alone. I’m in my car or I’m in a prop house, you know, I run into people that I know, but it’s all kind of in my own head, on my own. So I think when I get to dress the set I’m around people and we’re working as a group, so I like that the most.

4. What parts of your job are most challenging?

DH: The most challenging part is working with the tech scouts. This is in the part of the job where you’ve read the script, you understand your budget, you’ve been shopping, you’ve been planning things out, and then you get to the reality of what the actual space needs and you have other departments that need things from you so your list grows and grows and grows. So all of a sudden you’ve been planning out your lighting scheme and then the electricians come in and they’re like ‘oh no those lights won’t work for us’, or ‘we’ll need lights over here’ because so much more is hand-held, they rely a lot more on the set decorations for the actual lighting.

5. What initially made you want to pursue a career in set decoration?

DH: I went to college as a film major and an art minor and I thought the art department was a suitable fit for me. So I was a production assistant and really liked the people in that department so I kind of worked my way up and through to become a decorator.

6. What kind of preparation would you recommend for someone looking to enter your field?

DH: I would say being an assistant, being an art department production assistant so that you get kind-of the grand scheme of the department. I always recommend that people start at the bottom because I worked in a lot of different departments, and they’ve all informed me for my own job. I think that some people come into it from interior decorating and it’s so very different and there’s so many other components – even editing or lighting, things that you wouldn’t completely understand.

7. Where do you search for inspiration for your sets?

DH: I really like to do reality! I really like to go to other people’s homes and see how they live, that’s probably my favorite. I don’t find much inspiration in magazines per se, it’s more like real-like stuff.

8. So you’ve mentioned your team a few times, could you go into more detail as to how your team is composed?

DH: Yeah, so if you went from a triangle pyramid kind of shape, I would be at the top and then right below me would be the lead man, and then usually the lead man has at least four, but as many as 25 dressers that the lead man makes sure are hired and on the right locations. Some shows are really busy and you might be at two different locations on the same day so you’ll be picking up, dressing, returning, all at the same time. So you might have two or three trucks going at the same time and each of those trucks needs two or three guys in them moving things around. Then there’s also the on-set director who is in our department and that person usually stays on set and keeps the congruity of the set. So they’ll show up a little bit early before call time and walk through the set so that as the camera and crew are moving around it and moving objects, it gets turned the way that it is supposed to.

9. How do you choose what brands make it onto your sets versus not?

DH: It comes in different forms. Often times we have a limited budget, so if we have a huge, lets just say kitchen, modern-day kitchen that we need all the amenities for besides just the food, we will see who has product that can readily be available to be placed in film, but then on the other hand, we have producers that are concerned with over-commercialization and advertising. So we kind of have to work with the producers to make sure that everyone is on the same page with what products are in. So it’s not just, “Oh my character makes a certain amount of income, so therefore he would have a certain kind of refrigerator,” -- it kind of gets more complicated when you’re trying to place the refrigerator on set. There are certain studios where you can only use general electric products because of their relationship with how general electric owns them, so you can’t have competing brands in the show.

DH: Most products have to be graphically made so that they are all fake. Some prop houses carry vintage products, but usually we can’t show the label because if they are recognizable, we would have to get them cleared in case someone owns the rights to the images.

Now for a few questions from Hollywood Branded's "Behind The Sign" quiz:

1. If you could pick one favorite moment from all your time working on set, what would it be?

DH: Meeting my husband! We met on a movie set. He was the writer and director. We did three movies together and then after that we had our son Oliver so usually only one of us is working at a time, so we try to take turns.

2. If you could meet one celebrity, dead or alive, who would it be and why?

3. Do you have any nicknames?

DH: I have too many to name! My favorite is ‘Cool Ranch’ because my first name is Dorit!

4. What is the most embarrassing moment that you have seen or experienced on set?

DH: I have two answers for that one! Every time that I trip over cables I get embarrassed. But I was working on the movie Red State with Kevin Smith and he really likes to include the crewmembers that are behind the scenes into his movies. Some people get more major parts, but he called me and asked me to be someone’s wife which was really just a picture on a desk, but it turned into an all-day photo shoot, and I don’t even really like getting my picture taken! And then he called me to set with all the different pictures that they took of me and then I as the set decorator had to pick which one I thought would be the best one, and that to me was just horrifying! And then when it was actually in the movie, we had a crew screening and he edited that picture about twenty times I think to be funny and it got a huge applause every time. And then to make things worse, my crew returned the frame that the picture was in to the prop house with my picture still in it, so then sat at the prop house with the picture still in it and people would text me saying ‘oh I saw your picture!’

Get to know the wonderful set decorators and other key contacts to secure your placement or integration!