Why Marketers Must Adapt: Binge Watchers And Streaming Video On Demand

Addicted To Streaming Video On Demand

Passionate fans have proven that the binge-watching TV phenomenon born of Netflix and the like is a growing addiction. When every episode of a new season is available all at once, many people's lives stop and they watch the whole thing all at once. This has changed the way viewers

We take a look at why brand marketers need to get creative to better embrace this new cultural phenomenan.

There are a great deal of discussion over the pros and cons of the Streaming Video on Demand (SVOD) television formats, and how it impacts consumer viewing habits. There are arguments for and against, from the creative perspective of writers and directors, to the network and advertisers’ point of views. Whether the views are positive or negative, there is no question that SVOD is changing the game for all.

Among the naysayers happens to be Mitch Lowe, cofounder of SVOD early innovator, Netflix. His thoughts are that the new consumption habits are eliminating the traditional habits which have lent to the successful model of the TV in the first place. "Long term I don't think this is the right way to build audience,” says Lowe. “Even from an artistic point of view, the cliffhanger is so great. You lose that long-term buildup that the weekly episodes built. You can't even talk about it at work."

Because viewers are never on the same episode and same page in the storyline as is made possible by serialized shows, the “water cooler talk” that builds the brand and show following is nonexistent. With SVOD shows, there is an unspoken rule, being not to discuss the show in order to respect your peers who may not be in the same point in the series. With no office talk, no Twitter banter, it misses the opportunity to be the buzzworthy subject of conversation among the masses.

Habituating television viewing is its primary key to success, according to Dick Parsons, former CEO of Time Warner. With TV moving towards a model more similar to movies, it is less profitable.

As for the creative process, some writers argue that creating a series that more closely resembles a movie actually yields better content. Having to take episodic breaks into consideration, or figure out a way to include a major cliffhanger at one part or another just to ensure viewers will tune in the following week, can hinder the creative flow.

Turns out that binge TV is good TV. The quality of streaming TV and the star power of the talent have significantly increased. And in the end, the content created is a result is what consumers demand. In fact, according to research done by Procera Networks, 2% of Netflix subscribers watched all of season 2 (13 one-hour episodes) in one weekend.

The era of channel surfing – posting up on the couch and watching whatever good happens to be on – is long gone. Viewers are selecting what they want to watch, when they want to watch, and are more attentive, critical, and engaged than ever before. They are more passionate and loyal fans. Good TV draws contemplative viewers who expect high-level quality content, and crave it to the point of binging. 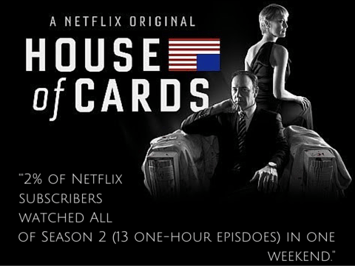 With commercials and traditional advertising being compromised, it’s easy to assume that perhaps the growth of SVOD is a threat to brands. However, with the evolution of TV comes the evolution of brand advertising. Additionally, the fragmentation of entertainment across numerous screens and platforms has forced brands to get much more creative – relying more on product placement partnerships and social media.

These alternate avenues, in turn, can result in a higher level of brand/consumer engagement due to the ability to strategically hone in on an already heavily-inhabited medium.

Brands are being embedded into the actual content of the show. Rather than a 30 second spot as a commercial break, brands become the product a starring character holds and interacts with onscreen.

And as viewers binge watch these shows, the repetition of the brands over a shorter period of time could lead to better retention of that brand.

Orange Is The New Black

Brands can partner with TV shows on social media campaigns. Even without weekly episodes airing, there are plenty of opportunities for engagement. Orange is the New Black, for example, hosted a cast Q&A where fans of the show could interact and unite in their shared discussion of the show by hashtagging #AskOrange. With shows getting more creative and working towards implementing more social media, the opportunities are endless for brands to jump in on the social media conversation and lead discussions by way of sponsorships. 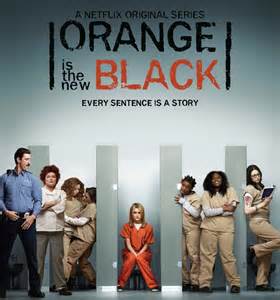 If anything, advertisers should pay closer attention to new media habits, as they are being driven by the consumer now more than ever before. In an overly saturated and fiercely competitive advertising landscape, entertainment content and social media are where consumers are present, and exactly where brand advertisers need to be.

Business models may die, but others will grow and thrive in their place, with new and creative forms of advertising arising as a result.