When a brand is looking for a feature film to partner with, whether for paid brand integration or to co-brand media, they are hoping for a guarantee that the film will be a success. The fact is, in the world of film, there are literally no guarantees. A film that one may predict to be a sure-success – based on a director at the helm, or an A-list cast – can often prove not to be.

This is why brands are so attracted to franchise films: Proven box office numbers exist, and a fan base is already established.  We take a look into the world of franchise film brand popularity.

Films that are proven entities at the box office are an easier sell in to top C-Level executives, who favor such films or have children who do. These franchise films include The Avengers, Harry Potter, The Mummy, Fast & Furious, Terminator, Mission: Impossible, Transformers, X-Men, Twilight, Ice Age, Toy Story, Jurassic Park, Spiderman, Batman, Superman, Pirates of the Caribbean, Shrek, and the behemoth of them all…James Bond. 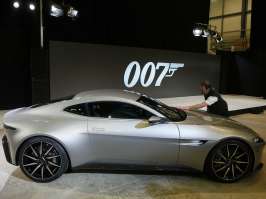 Brands are also attracted to another sort of franchise: The movie adaptation of a book.

With a script created based upon the content of a book, content that has already been proven to garner consumer interest, the partnership is more easily signed off at the executive level. Even more attractive is if a book has been on the New York Times Best Seller list, as this means that it has likely already developed strong national, sometimes even global, readership.

In the last two years, film distributors have averaged 20 major releases based on books.

The Great Gatsby this year was a studio and brand triumph. Dr. Seuss’ The Lorax is a parent’s happy place, as well as a brand’s clean - and environmentally responsible - partnership dream. Twilight is a case study that studios are trying to replicate, with the Hunger Games proving to be the only one approaching a similar success.

Tom Clancy’s first four feature adaptations’ box-office grossed a collective $781M worldwide, with the new Jack Ryan film due in theaters this December. Fifty Shades of Grey has been the talk of daytime TV and women’s friendship circles for the last year, with over 78 million books purchased around the world. The studio knows that purchase number will translate into box office tickets, and the film offers a bevy of brand opportunity to those catering to luxury with a bit of adult thrown in.

Book adaptations typically do extremely well at the box office and often take home awards during Oscar season, allowing brand executives to pat themselves on the back for a decision well-made aside from box office run success.

However, there is always risk involved. Some movie adaptations have ended as failures or border-line flops, not because of lack of PR or a brilliant storyline, but typically due to overinflated production budgets.

There are now over 100 former book titles currently in active development, meaning that production companies are gearing up to sign on cast, polish their scripts and start to shoot. These projects leave plenty of opportunity for brand partnerships with stories that are already known and welcomed with open arms by their targeted consumers.

It's proven - product placement is a more effective technique than you may be aware of!  And they're not the only tactic you can incorporate in your entertainment marketing mix. Download the results of our 2015 Entertainment Marketing Survey to learn more about the tactics that consumers and other brand marketers think  you should be using.