Millenials as well as Generation Z have a new kind of celebrity to look up to. The days of staring at the silver screen and wishing you could be married to Tom Cruise from Risky Business are waning; Gen Z and the younger millennials are turning to a different type of celebrity - the kind born and established on the internet. Whether it is a  or a , the most familiar faces these days are the ones we see every day on social media as we stare constantly at our tiny hand-held devices. And smart brands are making moves to take full advatage of this.

Hollywood Branded looks at YouTube’s new original series Part Time, how it partnered with Schick Hydro to make it free, and why this could be the beginning of a huge trend for video-hosting websites like YouTube.

YouTube’s new subscription streaming service, YouTube Red, may very well come to rival Netflix or Amazon Prime, but with a few key differences. For $9.99 a month, you can have access to all of YouTube’s content completely ad-free. Also, they will be rolling out a serious of original shows, collaborating with YouTube stars like PewDiePie and College Humor to create original series. Instead of turning to A-list starts like other SVOD platforms (internal link here), YouTube is staying true to what they believe their viewership wants - to continue to use YouTube as a platform for the user-generated content that originally made YouTube such a success. 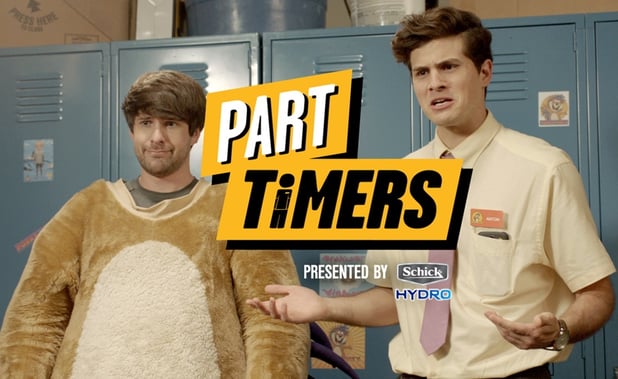 Although viewers will have to have a membership to view content ad-free and experience the new original series’ the massive website will be rolling out soon, YouTube teamed up with Schick Hydro, Defy Media and one of its most popular channels – Smosh – to bring a new series to YouTube viewers. And because of the corporate sponsorship, the show will be free. But definitely expect to see some very blatantly brand integration.

Part Timers focuses on the two YouTube sensations as they work in a pizzeria arcade combo whose glory days are long gone. Check out the trailer below:

Dunkin’ Donuts recently hired Vine star Logan Paul to become a part of their new campaign aimed at boosting their loyalty program – and they certainly aren’t the only ones trying to reach millennials through new social media tactics. Companies like HP and Fanta have taken full advantage of Vine celebrities and their corresponding following on other social media sites like Instagram.

This is a huge step forward for Dunkin Donuts as they have not had a strong social media marketing presence. Logan Paul was a major step for the donut and coffee change – Logan Paul has over 3,662,490,100 loops on Vine and 8.7 million followers. He’s no stranger to endorsements either, having worked with Coca-Cola, Hefty, and Best Buy before as well.

A company that is out of touch with its audience or customers simply will not succeed. It is impossible. YouTube is very aware of this. Just because they started the internet video phenomenon as we know it does not mean they can’t as easily fall by the wayside if they don’t adapt to the times (think Yahoo or Napster or even MySpace). Today's millenial is a , and traditional ways of consuming that media are changing by the second.

It will be interesting to see how YouTube Red turns out, as well as the partnership with Smosh and Schick Hydro. This could be a major turning point in SVOD.

Check out the blogs below to learn more about Youtube brand integrations!

Check Out This Infographic