With the increased freedom following the legalization of recreational marijuana in California, cannabis brands have more freedom than ever to get their products recognized by the execs and decision makers in Hollywood - while still remaining compliant with the ever-restrictive state and federal law. The cannabis market is one of the fastest growing markets, making it extremely competitive, and in order to survive, cannabis brands have to somehow separate themselves from the crowd. Effectively branding your products is key if you want to edge out the competition, build a loyal customer base, and drive sales of your products.

Due to the initial extremely restrictive policies on cannabis advertising, cannabis brands typically have to focus on word of mouth marketing, but with legalization marketing windows have opened. Cannabis and cannabis-friendly brands are building roots in the pop culture of today. In this blog, Hollywood Branded shares a look at how television product placement has benefited cannabis and cannabis-friendly brands in popular television shows and film. 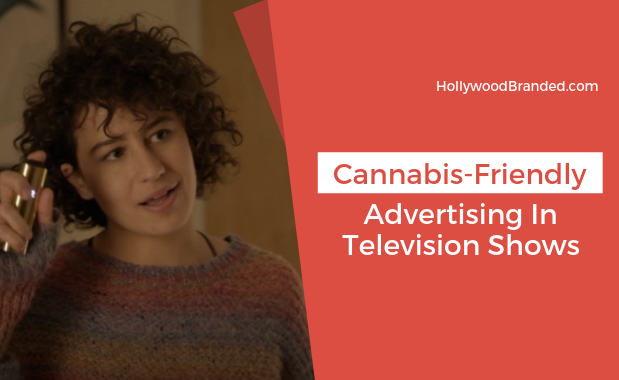 “Until recent years, the notion of branding was nearly non-existent in cannabis. For the first 20 years of its operations (1996-2016), California's colossal medical marijuana industry rarely saw a glimpse of branded products … dispensaries and brokers primarily delineated between products by strain names and production methods.” -Eric Layland, founder of Canna Ventures.

The relatively recent passing of California’s Proposition 64, which fully legalized the adult use of cannabis for recreational purposes, and New York’s 2014 legislation, which permitted medical use, allowing 44% of Americans to step out of the shadows without fear of persecution, as a result of this major cultural change, the entertainment industry took on some changes itself. This change has allotted for more and more well-known cannabis advocates such as Kevin Smith, Seth Rogen, Ilana Glazer and Abbi Jacobson, etc. to come out of the woodwork, with many of them choosing to incorporate these brands and products into their programs.

Produced originally as a Vimeo original, eventually moving to HBO, High Maintenance is a show that follows a New York weed dealer named “The Guy” who’s deliveries weave a tapestry of creative stories and characters all throughout New York, all connected through their affinity to this plant. The creators, Katja Blichfeld and Ben Sinclair, are both avid supporters of cannabis, and this appreciation unsurprisingly bleeds into High Maintenance in the form of subtle product placement. While you won’t see anything along the lines of strain name, High Maintenance has featured several cannabis pipe brands in it’s episodes

In the thirteenth episode of the first season of the Vimeo series “Rachel”, one of “The Guy’s” clients smokes with a Journey Pipe. High Maintenance’s official twitter even provided one interested fan with a link.

In the fifth episode of the second HBO season “Scromple”, The Guy’s ex wife smokes out of a Helix Water Pipe. The official producer of the pipes has even published about this placement. In the seventh episode of the second HBO season “HBD”, one of The Guy’s clients smokes out of a doughnut-shaped bowl. Without even a prompt from a fan, High Maintenance’s official twitter tweeted about how viewers might purchase one themselves.

Photo: If you saw this @KGB_glass donut pipe and wanted one, we’d like you to know where to get it: Here. http://t.co/4Z4Mqqu10P

As HBO is entirely funded by subscribers, it will not take fees for product placement but will orchestrate trades or loans of product through agencies, making the presence and promotion of these brands very significant.

A pilot episode written, starring, and directed by Clerks star Matt Smith, set in a dispensary follows two potheads and their attempts to navigate the ups and downs of managing a small business.

The half-hour episode was financed by FremantleMedia and five other firms. What sets Hollyweed apart from many other weed-friendly programs, is it’s financial ties to the booming cannabis industry. Of the firms financing this pilot, 83% were made up of a cannabis or cannabis-friendly company: Weedmaps.com, a social media community for medicinal marijuana users; G-Pen (Grenco Science), a manufacturer of portable vaporizers; DNA Genetics, a pot seed company; ACME Elixirs, an organic cannabis oil company; and RAW, maker of RAW Natural Rolling Papers. It is extremely interesting to note that this was one of the first times that brands objectively for cannabis-users have so heavily endorsed and funded a product meant for media entertainment on the level of television.

In Netflix’s Disjointed, Kathy Bates’ character is in charge of a dispensary and acts as a leader to a very eccentric cast of characters, the show plays on a lot of stoner stereotypes. The show also frequently mentions actual strains of cannabis,

“What I'm after is the Omega strain. Pot that doesn't just make you high but makes you whole.”

“Today we have the very popular Blue Dream.”

As each of these strains are actually produced by seed companies, Omega by Rogue Buds, and Blue Dream by DJ Short, these verbal mentions are extremely lucrative free advertising as anyone watching may be influenced to go out and purchase their favorite character’s strain of choice. This is not the first time that Netflix has dipped its toes in the cannabis industry, in promotion of Disjointed, Netflix teamed up with a California dispensary and released a series of marijuana strains named after ten of its shows, being sold exclusively out of the California dispensary. While this promotion was solely for promotional services and Netflix did not profit off of any dispensary sales, this was one of the first times that an established entertainment company such as Netflix, took a real-life interest in cannabis and recognized the advertising potential that exists in it’s industry as over 12% of Californians smoke cannabis.

Broad City is a program that has heavily situated itself in the middle of cannabis culture. The creators and starring actors, Ilana Glazer and Abbi Jacobson, are active marijuana smokers and have heavily incorporated this culture into “Broad City” Their characters are often seen lighting up and have, on several occasions, utilized name-brand strains and smoking apparatuses, even going as far as to make real-life partnerships.

In the fourth episode of the third season “Rat Pack”, Ilana has placed several strains of weed in cups with their name and description written next to them. Each strain listed is an actual strain that is produced today, those listed being Sour Diesel, Stone Hedge, Boggle Dragon, Red Dwarf.

In association with the cannabis vaporizer company PAX, Glazer and Jacobson had a vaporizer used in several of their episodes, most notably in the fourth episode of the fourth season, in which Ilana frequently smokes from a PAX 2 vaporizer; the two showrunners even received and posted about custom-made vaporizers. As both Glazer and Jacobson are very popular members of the “cannabis culture”, any of their many cannabis-friendly fans seeing them promote and use a product such as PAX would likely be influenced to follow suit. Beginning of a New Era

It is undeniable that the cannabis industry is rapidly growing, and as a result it is extremely competitive. As cannabis continues to seep into the culture and mainstream with such low levels of entry, it has become extremely important to separate themselves from other brands. This competition has made it impressive that they utilize methods to capture their ideal customers' attention, and show them why their cannabis products are a step above the rest. And they accomplish this through branding their content in entertainment.

If you haven’t already, make sure to check out some of our other cannabis-friendly blog posts

New to advertising and want to learn more about this age-old industry? Get a chance to learn from someone with over 20 years of experience, and start listening to Hollywood Branded's very own podcast! Marketing Mistakes (And How To Avoid Them) is uploaded twice weekly and gives you an opportunity to learn the secrets of the craft from our CEO and her extremely well-qualified guests.