Since James Bond first drank a martini shaken, not stirred, Brits have had a reputation in the mainstream entertainment world as suave, well-spoken folks, often with a witty and biting sense of humor. 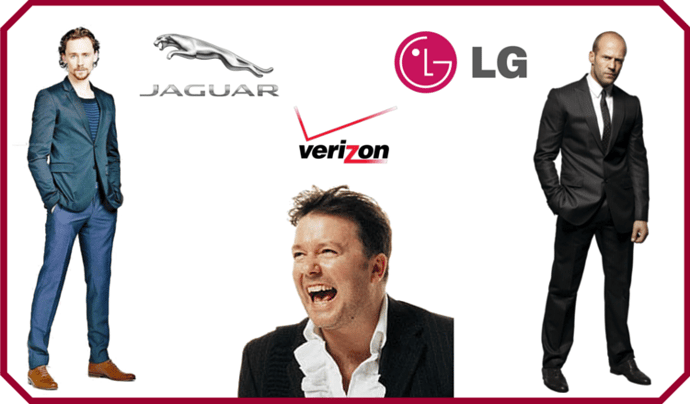 Minimalism is key in this series of ads for Verizon's network. In the ads, Gervais stands in front of a blank white screen and explains why Verizon is the best network, while dispelling claims by other networks that they are in face "the best" or "the fastest." His frankness and matter-of-fact nature are both pointed and funny and get the point across with no frills. Verizon's creative team found a spokesperson that has a natural affinity to perfectly share their message.

Tom Hiddleston has been the villainous, yet extremely sophisticated spokesman of the British car company for a bit now and does an excellent job in the company's "British Villains" campaign.  In it's latest spot however, Hiddleston is joined by another Brit: Nicholas Hoult. Both men play off of each other to tout the sleek features of the new Jaguar XE.

Jaguar has made itself known in the film industry for taking on roles that many other luxury car manufacturer's shy away from - the bad guy.  And it's been a smart move.  When other auto brands are fighting penny for penny for the hero good guy role, Jaguar and Land Rover have slid into the scene through loan of cars and less overall monetary investment.

Jason Statham, questionably the most quintessential British action star, plays up his reputation in a hilarious way in this new spot from LG. The ad begins with Statham replacing the battery in his LG smart phone. What follows is an action and dance-filled montage of Jason Statham as every character in the spot from a man fighting in the subway to a street dancer to even a woman in a restaurant to a tough bull-rider. The commercial is out-there in an attention grabbing way -  and it works.

Research shows that 43% of consumers are influenced to buy something after seeing a celebrity with it.

Check out how a few sports stars make funny ad endorsements work in this article.