How Funny Stars Can Sell You Anything

Celebrity endorsements can take all different forms, and celebrity endorsement ads come in all shapes, sized and colors. However, one of the most tried and true methods for these ads is simple: have funny celebrities do what they do best - make their audience laugh.

And some brands and their creative agencies do it really really well. In this blog, Hollywood Branded looks at the latest celebrity endorsement ads that make us laugh, featuring Kristen Wiig, Lil Dicky and Vince Staples. 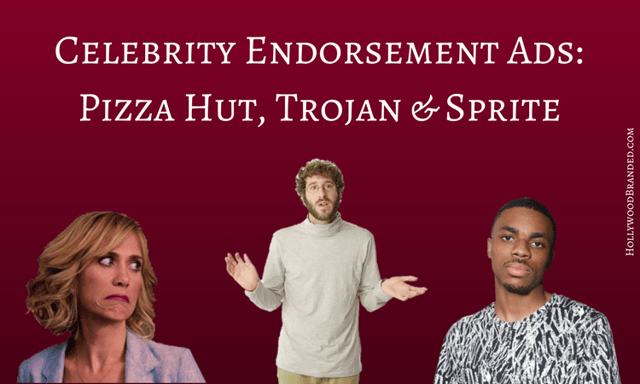 SNL veteran and comedian extraordinaire, Kristen Wiig is once again gracing our television screens in a new campaign from Pizza Hut as the "everyman."

And she is, indeed, everyman. From the guy in your neighborhood always fixing his car to the intense business woman in the office to a toddler playing in the front hard, Wiig represents everyone who likes pizza.

Changing characters is something Wiig is genius at, while retaining the parts of herself that make her so funny. This ad hits the spot. Check it out:

Lil Dicky is a famous comedy rapper from Philadelphia who has a very niche but loyal audience. His songs have featured celebrities like Snoop Dogg in them and he is known most for his honesty about life, fame and himself as an awkward kid who used his Bar Mitzvah money to launch a rap career.

He's huge within his genre and a hilarious guy which makes him the perfect fit for this campaign that explains just how important it is to use protection. Trojan has teamed up with him to create a series of ads and sponsored content explaining how and why to use condoms. In a YouTube series titled "Pillow Talk" after the name of his latest single, Lil Dicky talks to people in bed about sex.

Aside from this, he stars in Trojan's latest commercial about how ridiculous it would be to not wear a condom - as well as knock over all of his stuff. Check it out:

In a short but sweet spot from Sprite, Vince Staples stars as a carnival game worker who is recognized by a group of "random teenagers." Before they can get his name out though, he knocks over the bottles and tells them they've just won. The prize? A cold, refreshing Sprite with Vince's lyrics on the can.

What's so funny about this ad is its self-awareness as an ad. And Staples's personality fits right in. Check it out:

Could YOUR Brand Use A Celebrity Boost?

People love when their favorite celebrities are in funny commercials. Check out more funny celebrity endorsement ads in our blog post Sports Stars Embrace The Weird In Celebrity Endorsement Ads.