Have Our Kids Started Banking?

Understanding that adult figures are the ones watching these productions with their kids, these partnerships become unique and entertaining avenues for these brands to reach their audience. We’ll examine the specific campaigns, how they rolled out, and why using a seemingly youth reaching platform helped these brands connect with older audiences. In this blog, Hollywood Branded explores the top unconventional brand partnerships with children’s films. 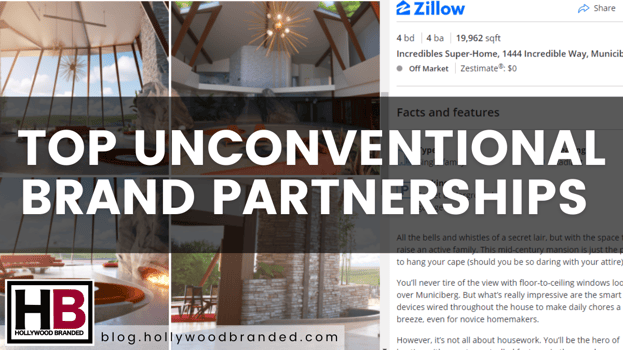 One of our favorite and most recognizable of these partnerships came about when Zillow partnered with Pixar’s The Incredibles 2. The partnership begins with an animated placement in the film when the character of Helen Parr, the family’s matriarch, also known as Elastigirl, uses Zillow to look for a new home. The placement was very organic to the content, and it was a cool moment to see such a realistic brand moment in an animated feature.

However, that wasn’t all. Zillow created a co-promotional campaign that included a custom commercial spot. The commercial spot featured clips from the film. The goal of the spot was to showcase that Zillow is the best source to find your perfect home, even if you have unique requirements like super-secret hidden exits and sunken living rooms. In the commercial, the dramatic movie-sounding narrator says, “There’s a perfect home for everyone if you just know where to find it.”

Check out the spot below!

The icing on the cake, however, what when Zillow listed the Incredible smart house from the film on their website like one would do with a traditional house listing. Referring to it as the “Incredibles Super-Home,” it boasts, “All the bells and whistles of a secret lair, but with the space to raise an active family. This mid-century mansion is just the place to hang your cape (should you be so daring with your attire).” The listing is actually still live, but unfortunately, the home is currently off the market!

In yet another Pixar gem, multinational appliance manufacturer, Whirlpool, partnered with Disney Pixar’s Onward to promote their smart appliances. What’s the angle you ask? With the help of Onward’s characters, Whirlpool used the film to showcase how their Smart Appliances are like magic! In the absolutely adorable spot one of the characters is trying to turn the oven on with his magic, but his magic just isn’t cooperating. So, instead another one of the film’s characters starts the over from her cell phone. The spot ends with, “Experience the magic of smart appliances with Whirlpool.”

One of the more creative partnerships we’ve seen was between Universal’s Croods 2 and Chime. Having over 8 million customers, Chime is a banking app that offers fee-free financial services. They have no physical branches and don't charge any monthly or overdraft fees which is the major angle the brand took when partnering with this film. One of the film’s major themes was the Croods family coming to grips with a more evolved society, which is symbolic to the evolution we’re seeing in banking thanks to a company like Chime.

The branded created a commercial spot featuring the characters – check it out below!

This marked the company’s first time partnering with a film for a co promotional campaign, and we don't expect it to be their last. In addition to the TV spot, the banking institution supported the campaign with paid media across digital and social platforms as well for a total reach of more than 750 million people in North America alone! These impressions helped bring awareness to those millennial parents hyper aware of releases like The Croods 2. Not to mention that these impressions certainly helped The Croods 2 reach a fresh audience of young parents.

Southern California’s East West Bank partnered with DreamWorks’ animated feature Abominable to promote their banking services. The messaging of this campaign was uplifting, “Watch young Everest as he journeys home to the Himalayas, with some much-needed help from his friends. Like Everest, we all have places we want to go in life, and we all need someone to help us get there. Let us be the bridge that takes you where you want to be.”

Similar to many of the partnerships above, the PG cartoon certainly wasn’t meant to attract users of checking and savings accounts, but it did succeed in attracting their parents.

It’s a no brainer for the Audi’s and the Toyota’s of the world to partner with the action packed Marvel films, and it’s an obvious choice for the Burger Kings to campaign with Pixar’s finest, but it’s a unique and impactful choice for these brands to use children’s movies to attract an older audience. Most parents of young kids barely have time to watch a 30-minute sitcom let alone head to ma movie theatre without their kids to see a full-length movie. But… I can guarantee you that they’ll take advantage of even minute of that animated film to keep their kids entertained. For the sake of their kids (and their sanity!) they’re paying more attention to this type of content. By partnering together these brands were able to tap into a parental market and create a good feel-good moment for everyone involved while also promoting themselves as family friendly companies. Many of these industries tend to be stressful and confusing (real estate, banking), but positioning themselves with this fun content gives new light to the brands. It makes them more approachable. It’s a smart tactic and one that we’re convinced is here to stay.

If these partnerships struck an interest, there are plenty more where that came from. Check out some similar articles below!

Do you want your brand to have the opportunity to participate in these types of campaigns? If so, sign up for our Hot in Hollywood newsletter! You'll learn about all of the upcoming film and TV opportunities so your brand can be the next success story we write about!