The Power Of Posty

Post Malone is the epitome of the saying “hard work pays off.” At just 25 years old, he has a total of nine “Top Ten Hits” on the Billboard HOT 100, including four number one singles. In addition to releasing chart-topping hits, Post Malone has quite the trophy case; he has won several American Music Awards, an MTV Video Music Award, has been nominated for six Grammys, and cleaned up last year at the 2020 Billboard Music Awards with nine wins including “Top Artist.”

However, his success in the music industry is not just shown by his constant release of hit-after-hit, but also by his unique and alternative aesthetic. Even with the phrase, “Always Tired” tattooed under his eyes, brands are eager to get Post Malone to support them because of the authenticity that he brings to the market. In this blog, Hollywood Branded shares eight brands who have partnered with Post Malone as a celebrity endorser and how your brand could be the next one! 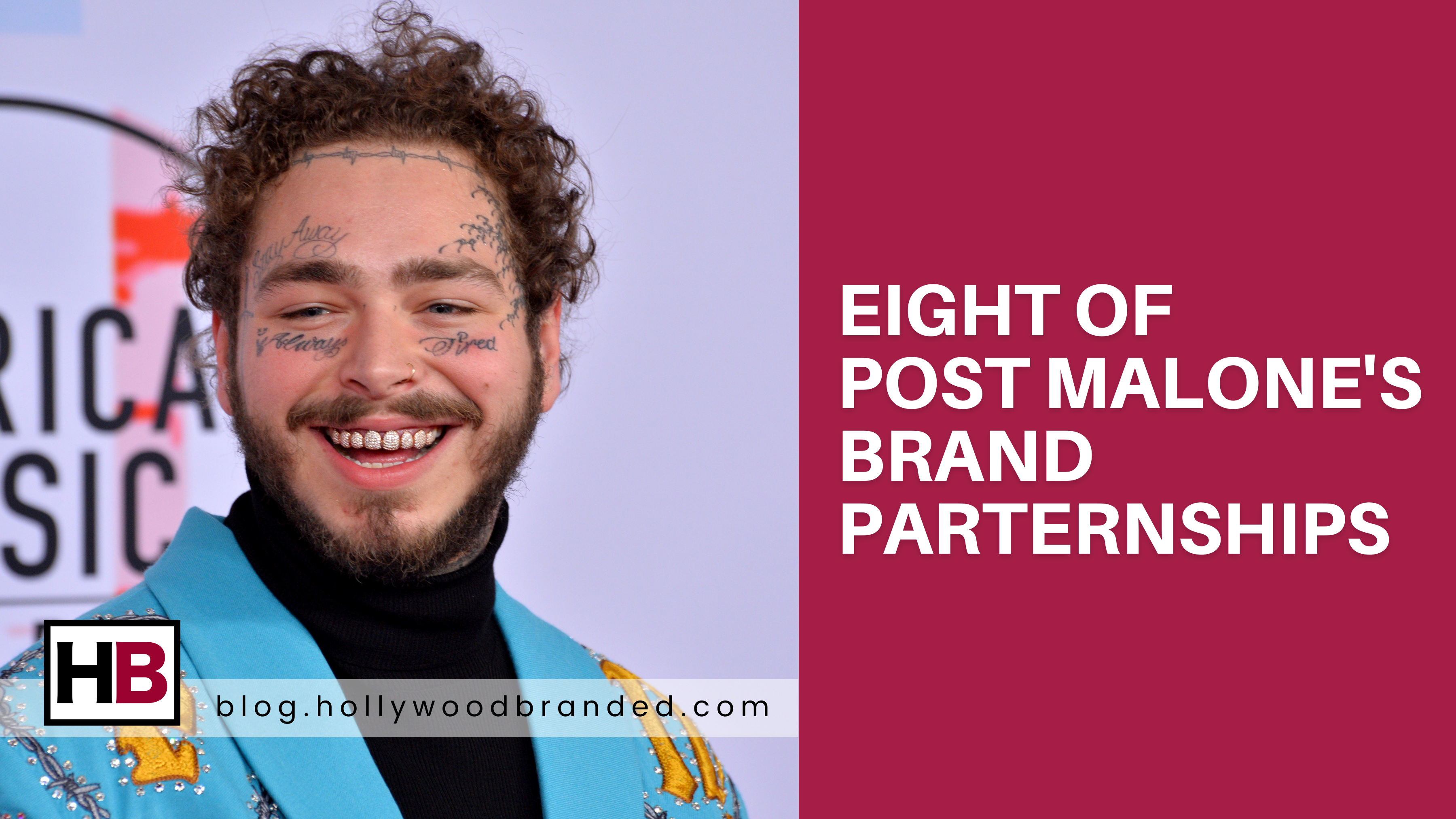 How He Became A "Rockstar"

Post Malone, whose real name is Austin Post, gained recognition in the music industry in 2015. He released his first hit, “White Iverson,” on SoundCloud after he moved to Los Angeles from his home state of Texas. With that one upload, his life changed forever. Within the first month of the song being released, it had over one million plays. Soon after, according to E! Online, Post Malone signed with Republic Records, performed at Kylie Jenner’s birthday party, collaborated with Kanye West on his song “Fade,” and was recruited by Justin Bieber to be the opening act on his 2016 Purpose World Tour.

Later in 2016, Post Malone released his debut album, Stoney. The album received over one billion listens worldwide and was awarded triple platinum with four platinum singles. Since then, Post Malone’s success has only continued to rise. Whether it be his single “Rockstar” that held the number one spot for eight weeks, playing Coachella, or embarking on his own stadium tour, Post Malone has become a household name.

Post Malone said in an interview with Forbes, “It has been wild, you know, I started out just putting a song that I made out on the internet without being sure if anyone was going to like it and it took me on tour around the world with Justin Bieber, it's been amazing!” 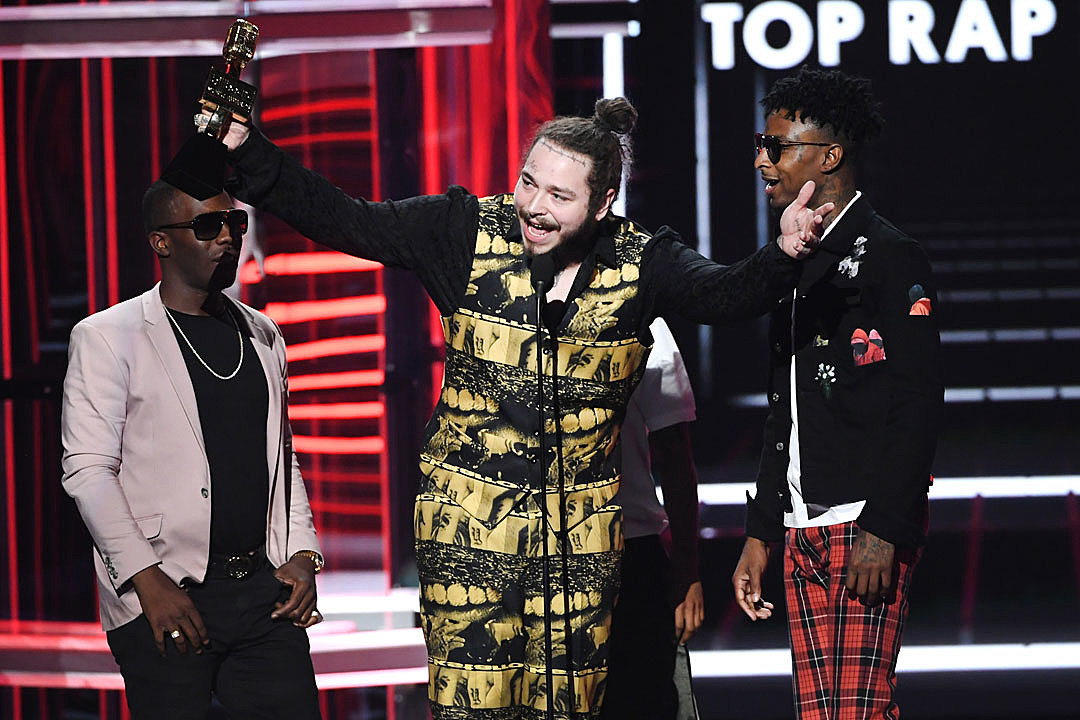 For anyone that has been to a Post Malone concert, at some point in the show Post Malone takes a few sips of beer. With that being said, it makes sense that he would be a celebrity endorser for one of the most recognizable beer brands, Bud Light. Post Malone first partnered with Bud Light in 2018 as part of their “find the best friendships” campaign. Since then, Post Malone has headlined the Bud Light Dive Bar Tour, collaborated with Bud Light to create a one-of-a-kind branded clothing line, and posted on social media to his 22.6 million followers. Lastly, he also starred in several Bud Light commercials, including ones that aired during the Super Bowl. 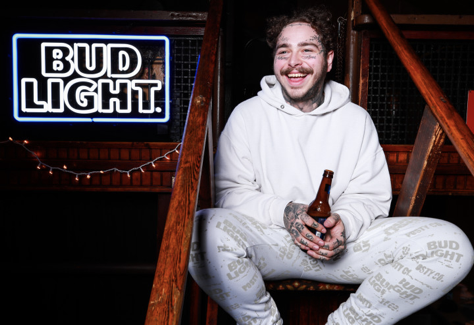 It all comes back to the power of social media. Similar to how Post Malone’s career got started, his partnership with Crocs was also started online. On June 5th, 2018, Post Malone tweeted, “u can tell a lot about a man by the jibbit[z] on his crocs.” That tweet is what got Crocs’ attention and what sparked the conversation of Post Malone doing a brand collaboration. According to Crocs’ Marketing Officer Terence Reilly, “Post Malone is a beloved creator and represents what it means to be comfortable in your own shoes, so collaborating on product design is special." That is what attracted both parties to partner together because of that message: being comfortable in your own shoes. With Crocs’ unique look and Posty's atheistic, the partnership was meant to be. Now, Post Malone and Crocs have collaborated on four shoe designs, each selling out in minutes. The most recent collection, “Post Malone x Crocs Duet Max Clog” were listed at $59.99. 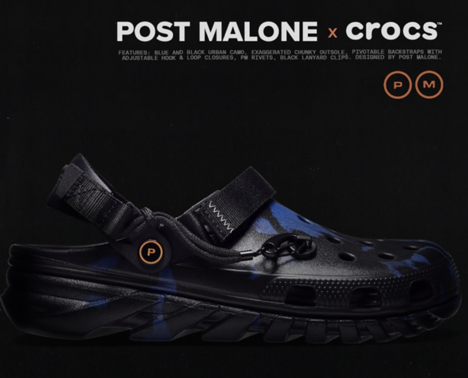 After seeing the success of the Post Malone x Bud Light collaboration, Doritos wanted to hop on board and have the singer promote their new flavor of chip; Flamin’ Hot Limón. This creative marketing strategy had Post Malone re-introduce himself as Post Limón. Within the commercial, Doritos showcased their product, but also continued to showcase Post Malone’s style: driving a lime green car, bedazzled green blazer, and even getting a tattoo of a Dorito on his face. In an interview with Billboard when asked about his Doritos collaboration, Post Malone said, “I’ve been eating Doritos since I could walk… They’re in every green room and I’ve always been a big fan. I can eat a whole bag of every flavor and that’s what I did last night. The chip is fire. They sent it to me and I tried it and I loved it.” 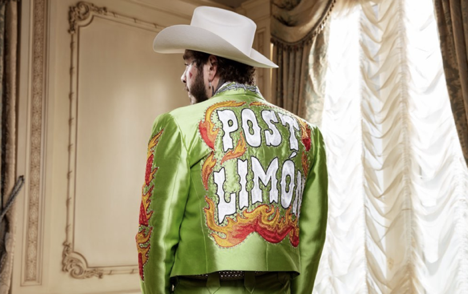 For those of you who do not consider yourself a “gamer” perhaps you are unfamiliar with this brand. HyperX is a brand geared toward providing consumers with quality gaming accessories and gear. Post Malone has been vocal about how he is a ‘Call Of Duty’ lover and gaming fanatic, which is exactly why HyperX reached out to Post Malone to become a HyperX Brand Ambassador. In addition to having Post Malone market the brand, HyperX also sponsored a concert event titled, “Posty Fest.” With this collaboration, HyperX was able to provide an in-person booth for attendees to test out products. In addition, the hashtag, #HyperXPostyFest was created to promote user-generated content for the brand as well as enter into a contest to win a pair of HyperX headsets signed by Post Malone. 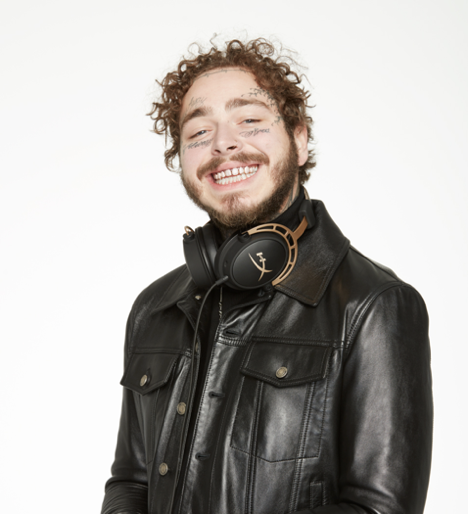 The sunglass company, Arnette, was inspired by Post Malone’s unique look. That is why they teamed up with artist for an out-of-the-box collaboration. For the first collaboration, Arnette incorporated Post’s under-eye tattoos that read, “Stay Away” and “Always Tired” into the design of the lenses. In early October, Arnette released another line of Post Malone inspired glasses. Arnette has gone to social media to promote this new line. On their Instagram account, they have been able to use Post Malone’s image as well as songs in their advertisements. 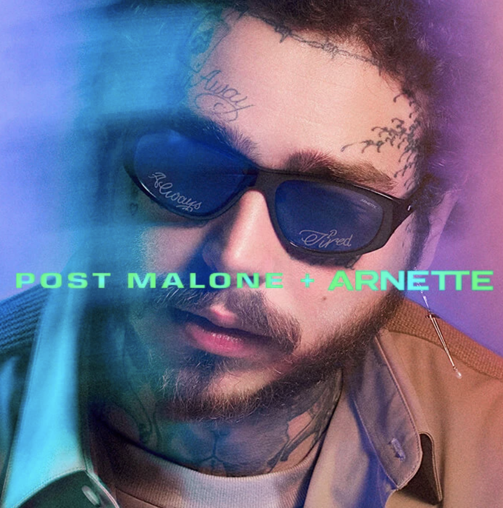 Madrinas Coffee has taken a very different approach to marketing than other competing coffee brands. Their marketing strategy is to tap into the gaming market. They sell their product in 16oz cans in order to compete with other energy drink companies. Caffeine is important in this industry as gamers need to be awake, alert, and focused for hours in front of the screen. According to Madrinas Coffee’s website, “Madrinas Coffee is your all-natural alternative to artificially charged sodas and energy drinks. Madrinas focuses on creating the world’s best Cold Brew with all-natural and better-for-you ingredient…” Considering the company’s strategy of reaching consumers is through gaming, they knew that partnering up with one of the biggest celebrity gamers would be perfect for their brand. Alex Davis, Co-Founder of Madrinas Coffee, said; "Post Malone is shaping music culture as a content creator & artist, but he is also a gamer just like us. When we heard that Posty dug our Cold Brews and vibed with our brand, we knew that a partnership with Post would help us take the Madrinas #coffee4fuel culture to new heights.”

Did you know that Post Malone is Postmates’ number one customer? Just last year, Posty ordered $40,000 dollars on the delivery app. From getting food delivered to getting necessities for a last-minute party, Postmates was the singers go-to for all his needs. According to Postmates, he ordered 3,000 items, had over 660 orders, and ordered through the app in 52 cities across the United States. But can you guess what Post Malone’s favorite restaurant is? I’ll give you hint: Post Malone spent $8,000 on their biscuits alone! It’s Popeyes!

Most people don’t know this, but you can order pretty much anything through Postmates – not just food. On March 26th, 2019, Post Malone tweeted a screenshot of an order for FLIR’s Night Vision White Phospher Goggles. FLIR is one of Hollywood Branded’s clients – so of course FLIR as well as our agency took note of the tweet and sent the artist the goggles! Click here for the video of Posty’s reaction. 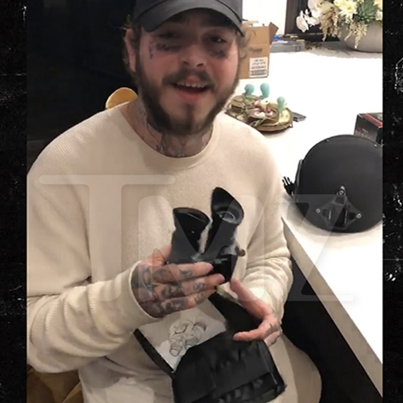 In One Word? Unique.

Post Malone is able to bring a unique perspective to any brand or company that he partners with. Whether it be his look, staying true to himself, or engaging with his audience, Post Malone is able to incorporate his brand with the brand that he is promoting. Brands appreciate being able to partner and promote their product or service through authentic and creative channels, like Post Malone.

If you are a brand looking to spread awareness and market to a large audience, take into consideration Celebrity Partnerships. The brands mentioned in this blog were able to come up with campaigns that were creative and unique to fit Post Malone’s style, yet not too overboard where the campaign jeopardized the brand’s image. Partnering with a celebrity will allow your image to be exposed to millions of new consumers and increase your sales. Plus, who doesn’t want a top A-list celebrity to be the face of your brand?

Do you want to learn more about celebrities and celebrity endorsements? Check out other blogs written by our Hollywood Branded Team!