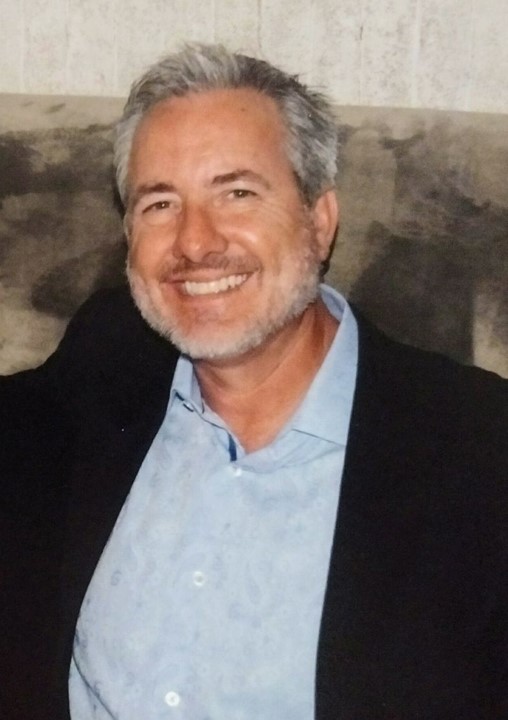 Athletic brands and sports teams are natural partners.  Not only do athletes wear the gear on the field or court, but the fan base wears it to celebrate their passion of their team and favorite players.

Some brands and teams get it right more than others, and how both parties market the partnership directly drives popularity and sales success.  In this blog, Hollywood Branded shares how an athletic brand partnered with a sports team with the goal to achieve massive global increases in sales revenue. 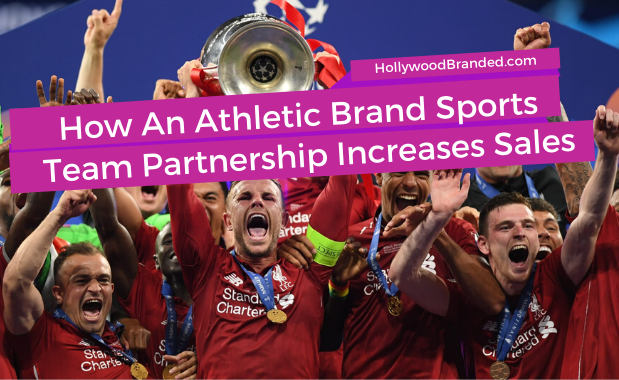 Liverpool Football Club has won several big trophies recently and have won nearly every game so far in the 2019-20 English Premier League season, but their greatest victory will be celebrated on June 1, 2020 when Nike becomes their official jersey sponsor.

LFC’s jersey partnership with Nike could prove to be extremely lucrative to both parties. In fact, Liverpool Football Club’s brand partnership with Nike demonstrates the unlimited potential for increased sales for brands who match themselves with the right partner to expand awareness of their brand.

Nike tells us to “Just Do It” and they, themselves, just did it! They landed the current top club in the world of football (soccer). Liverpool FC, the Champions of Europe, UEFA Club World Cup Winners, and soon-to-be Champions of the English Premier League (for the first time in 30 years) will be wearing Nike jerseys in the 2020-21 season and beyond after what is being reported as potentially the biggest kit deal in EPL history.

According to The Independent, “The deal could represent a record in English football, topping their previous deal with New Balance that was worth £45m per season and possibly matching or bettering Manchester United’s £75m per year deal with Adidas.” This would equate to Liverpool earning roughly $98 million US dollars for this partnership in one year alone.

In addition to the various LFC club jerseys and uniforms, Nike will be the supplier for the team’s practice, coaching, and travel wear. The Independent shared a statement from Liverpool Football Club:  “Liverpool Football Club is delighted to announce Nike, the world’s leading footwear and apparel company, as its official kit supplier from the 2020-21 season. The multi-year partnership, which begins on June 1, 2020, will see Nike manufacture and supply Liverpool FC’s playing, training and travel wear. As official kit supplier, the agreement will see Nike outfitting the men’s, women’s and Academy squads, as well as coaching staff and Liverpool FC Foundation.” This deal results in a new variety Nike branded Liverpool gear being made available to fans around globe.  And one fans will be eager to quickly purchase to keep up with the current look.

Liverpool FC has a tremendous international following as a result of their long running history of success in England and Europe as well as their squad of multi-national superstars. In addition to their many stars from the British Isles and Europe, Liverpool boasts two of the top players from Africa – Sadio Mane of Senegal (African Footballer of the Year 2019) and Mohammed Salah of Egypt (African Footballer of the Year 2017 & 2018). Liverpool also has a strong following in South America as a result their three members of the Brazilian National Team – Roberto Firmino, Fabinho, and Alisson. LFC has also added to their popularity in Asia with the recent signing of Japanese star striker Takumi Minamino. 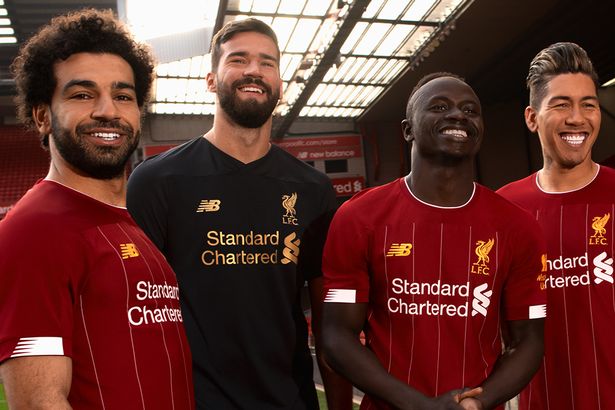 One of the main reasons Liverpool FC was willing to fight a legal battle with their current kit provider, New Balance, in order to partner with Nike is for the greater international reach that comes with the Nike brand.

According to CNN, “New Balance alleged the club was refusing to honor the terms of its reported $52.6 million-a-year deal, which expires in May. Under the terms of the deal, New Balance said it was entitled to renew its deal with Liverpool if it was able to match offers made from rival kit suppliers. However, Liverpool argued New Balance -- which has been its manufacturer since 2015 -- could not match Nike's potential marketing and distribution powers and the High Court in London ruled in the club's favor.”

This was a huge win for both Liverpool and Nike who now have unlimited potential capitalize on each other’s international reach. And a massive loss for New Balance.

CNN shared a statement from Billy Hogan, Liverpool's managing director and chief commercial officer: "We welcome Nike into the LFC family as our new official kit supplier and expect them to be an incredible partner for the club, both at home and globally as we continue to expand our fan base. As a brand, Nike reflects our ambitions for growth, and we look forward to working with them to bring fans new and exciting products."

Liverpool is clearly not the only winner who will be walking in the Nike brand in 2020-21. Nike has been known to attach themselves to champions, a strategy that has helped to promote their brand as the one for winners. In addition to Liverpool, Nike will continue their relationship into the 2020-21 season with two of the other top clubs in the English Premiere League – Chelsea and Tottenham.

Nike is the official kit sponsor of other top European clubs. Nike jerseys are worn by PSG (Paris Saint-Germain) with international stars like Kylian Mbappe and Neymar Jr. Barcelona, another massive European club, which is perhaps Nike’s biggest jewel in their football club crown with their 26 Spanish La Liga titles and 5 UEFA Champions League trophies – not to mention the GOAT himself, Lionel Messi who has had a long and successful career with the club. Nike was also the jersey worn by both the reining FIFA World Cup Champions – France (men) and USA (women).

In addition to the teams and soccer stars Nike has as partners, they also have a some of the biggest athlete stars outside the soccer world signed to individual contracts, which could potentially be leveraged to co-promote LFC and the Nike brand to an even greater degree world-wide. 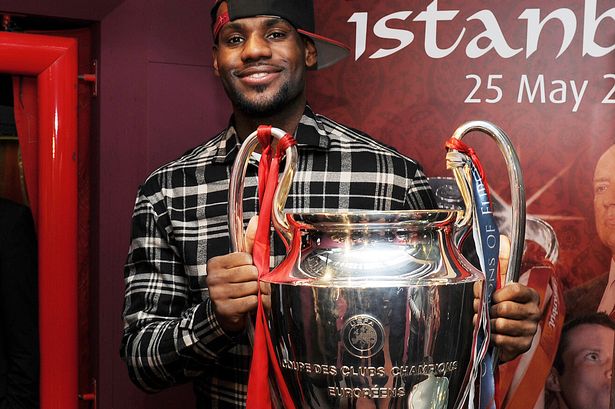 One such star is the NBA’s Los Angeles Lakers’ LeBron James. According to Business Insider, “Liverpool FC part owner Lebron James took to Instagram to welcome the English Premier League side to Nike after it penned a record new kit deal with the iconic brand. James, who owns a 2% share in the club, and is a Nike sponsored athlete himself, shared his delight at the agreement on social media. ‘YNWA,’ the Los Angeles Lakers star said, alongside a heart emoji and picture of the club's badge. ‘YNWA’ stands for ‘You'll Never Walk Alone,’ Liverpool's club motto.”

LeBron James welcoming Liverpool to Nike via social media also demonstrates the potential crossover reach Liverpool can have with the help of other Nike athletes with strong social following. That tweet by James reached over 22 million Twitter followers. Many of LeBron’s follower may or may not have had any idea who Liverpool F.C. are – at least they will all know they’re a Nike team now.

All Branded Partnerships Are A Team Effort

Branded Partnerships are not always between two mega-giants like Liverpool Football Club and Nike. Many are much smaller. However, regardless of the size, with all successful branded partnerships it is important that the two sides are a fit and can work together as a team.

Both sides must be clear about what their objectives are in order for the relationship to be a successful one.

Read more about successful brand partnerships in these blogs our team has written.

At Hollywood Branded, we pride ourselves in finding the right partner for each and every brand with whom we work.  One of the go-to opportunities for brands to consider is partnering with TV and film projects.  Check out this e-book where we provide insights on how to actually make that happen!

Ian is not only our COO, but also our sports guy, and as a Los Angeles native, a die-hard fan of our local teams – especially the Kings. If there is a major sporting event going on, he’s either there or watching it. And if you have a sports question, it’s likely he has the answer. Ian has a Bachelor’s of Communications from UCSB and Masters in English from UCI. His first job out of college was working at the Director’s Guild and his creativity and drive make him a natural fit for bouncing ideas and structuring strategic partnerships. Ian then held a 26 year as an Administrator and Educator, before heading over to Hollywood Branded to help our team stay organized. When Ian’s not working he’s often found wishing he was watching a band or listening to music, one of his favorite passions.