Not all countries are the same with regard to their rules about product placement. For years product placements have been integrated in American film and television, with many audiences viewing them as a fundamental component of the show. We all remember such mega brand presence as Reese’s Pieces in E.T., or Pizza Hut in Wayne’s World and Starbucks in Austin Powers.

But it surprises many TV viewers to find out that there is no standard to product placement laws, and in certain countries the product placement laws can be so strict that certain products and product types are completely banned from film and television altogether! In this blog, Hollywood Branded shares insight on how British Product Placement law is different than that of the US, and many other countries.

Culture is a huge way of life here in Hollywood, and that even stems down to the Hollywood Branded office where several of our employees and interns come from all corners of the globe.

As an example, the UK broke major grounds just a few years ago, when on February 28th 2011 TV programs made for the UK audiences were allowed for the FIRST TIME to include product placement – on certain conditions.  These conditions were outlined by the governing body, Ofcom, which is the communications regulator in the UK.

The Law in The UK

In the UK, British product placement is defined as a company paying a TV channel or a network producer/distributor to include its products or brands in a program. As an example, a computer company might pay for the computer to be used in an office scene, or a car featured in an action racing scene.   This doesn’t mean that ALL products seen in a TV show have been paid for – the UK provides an allowance for ‘props’ where items are needed to dress the set to make it look more realistic. And they call this "prop placement".

But in the case of ‘props’, there is only a trade of goods/loan of product (much like the majority of US product placement still - with exception to really big action films and prime time TV network), and no fee being paid to the producers or distributors of the content. And ‘props’ don’t have to have the same audience notification that paid placements do. Here in the US we consider both of these types of exposures as product placement, but typically call the paid-for-placements ‘brand integration’ or ‘product integration’.

Ofcom's Broadcasting Code contains rules about what type of products can be placed in programmes, where product placement is allowed, and how placed products can be featured.

The law also stipulates that there must be ‘editorial justification’ for a product to appear in a program.  What does THAT mean? It means the product needs to make sense and not be awkwardly placed into the content. And that the content cannot be modified to make it fit more seamlessly.  Another difference with US content – paid placements often require the content to be tweaked to better fit.

Content in the UK also cannot overly highlight the paid placement brand by making claims about how good the product is, or showcase it to such a degree that it feels like an advertisement.  So much for endless Coca-Cola bottles in the hands of judges of game shows (yes American Idol, we are talking about you!!)

But it is worth mentioning that product placement in film and international programs that were broadcast in British Cinemas and on British Television, (such as a US drama series) has always been allowed.

How The Brits Feel About It

We asked our Social Media and Inbound Marketer, Abigail Haase, a native Brit, what her TV experiences were.

“I remember when product placement was first integrated into British television, and all the hype surrounding the new television ‘phenomenon’. The first ever paid placement to be featured in the UK came from Nescafé Coffee. In 2011, Nescafé coughed up £100,000, (approximately $150,000) for a nine week placement on the British morning television show, ‘This Morning’. On the day of the product placement debut, we all sat eager in anticipation to witness our eyes being seared by the UK’s first ever product placement, and subsequently burst out laughing as the tiny coffee machine blended in with the show’s backdrop during a cooking segment… what a big deal over nothing!”

In the UK product placement is allowed in films, (including drama series and documentaries), TV series, entertainment shows and sports programs. News, religious, current affairs, and consumer advice shows, and children’s programs are not allowed to feature product placements.

Audiences will know if the TV show they’re watching will contain a paid product placement, as the TV show is required to display a specific logo during the opening and closing credits of the program, and this logo is also repeated after any advertising break during the program.

TV programs  don't have to show the logo on content that was originally produced outside of the US, just content unique to the UK, even if that brand was a paid for placement originally. 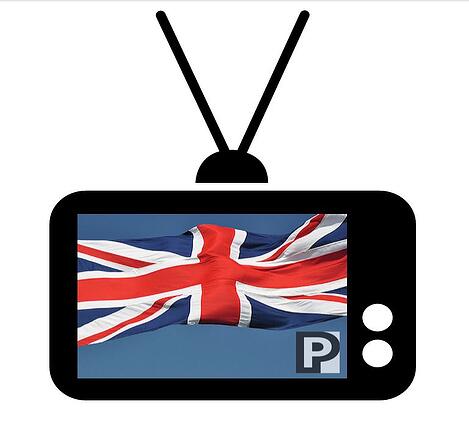 One of the most popular and longest running TV series in Britain currently is ITV's Coronation Street, which all of a sudden started getting a lot of unexpected social media conversation going when they signed product placement deals with two companies, Co-op (a grocery store chain) and Costa Coffee (a British coffee chain).

As part of the show's Weatherfield set, both brands have had storefronts built, which will allow for a retail setting, as well as more naturalized reasons for cast members to be carrying around bags and cups, or having posters seen in various scenes for either brand.  The show is rolling out the retail build slowly - first introducing cups and branded packaging before showing the retail stores on set.

After the British laws changed in 2011, Coronation Street was the first prime time series that incorporated paid product placement, with a Nationwide ATM installed inside the store owned by Dev Alahan.

What was most interesting to our team was that fans of the series took to social media to talk about what these brands may mean for the show - funnily enough with concern that the fictional Roy's Rolls and Frescho coffee shop would have its business impacted, with characters using Costa instead of Roy cups.

“Bloody hell, is Costa the new sponsor for Corrie, every episode someone has a Costa cup in their hand, what’s wrong with Roy’s?”  - Twitter 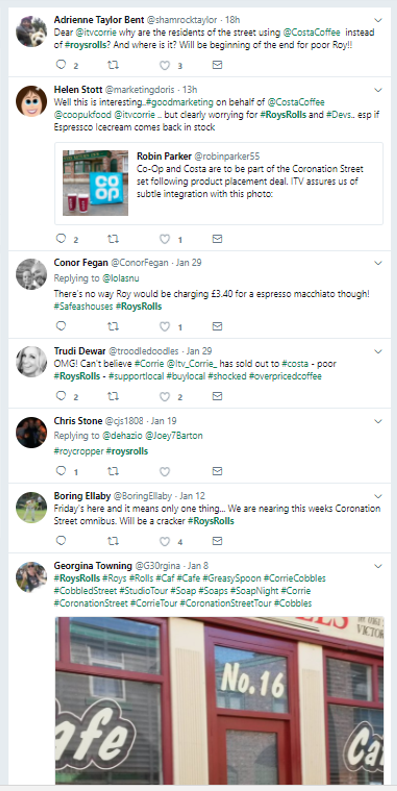 What Cannot Be Placed In A UK TV Show

The US doesn’t allow cigarette brands to be featured in TV shows, and regulates prescription drug features.  The UK takes it a few steps further, with the following categories not allowed:

As you can see, these rules are very different from what we know of product placement out here in the USA!

And check out some of our other agency blogs that talk about best marketing practices for product placement and brand integration partnerships:

Do you want to learn more about product placement strategies? Click here to download our Product Placement 101 Infographic: