How To Properly Pitch Your Contacts

It is difficult to make connections with people when you are just sending them a generic sales email/pitch. In order to make your connection count, you must do your research and put your time in effort into reaching out. Personalize it, talk their language, and be specific!

Curtis is a PR expert who is here to share his secrets. He breaks down the importance of press releases and how to dial in your journalist contacts. In this blog, Hollywood Branded dives into the media landscape to teach how to properly pitch your contacts. 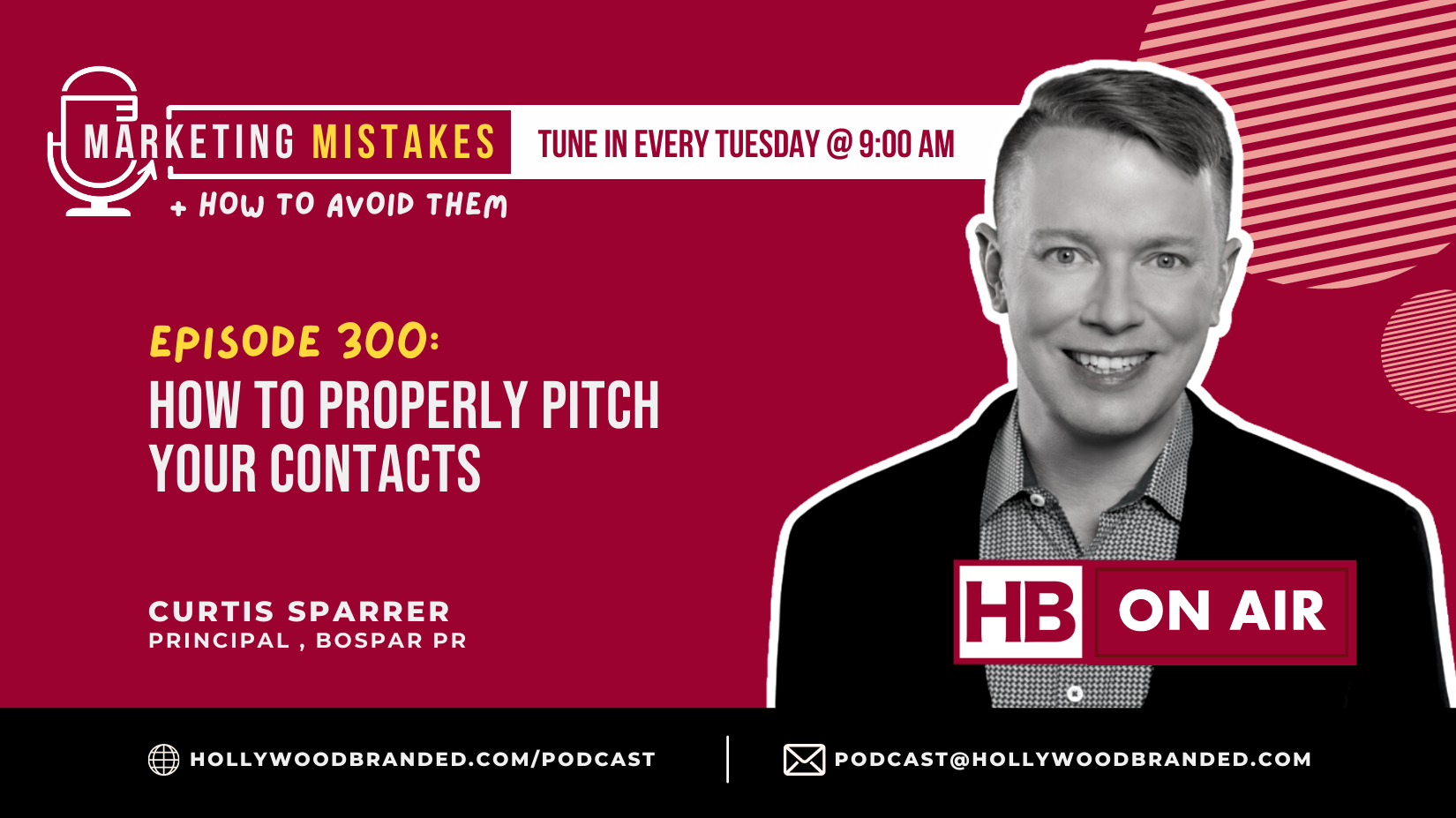 A Little More About Curtis

Curtis Sparrer is the principal and co-founder of Bospar PR, a boutique tech PR firm with a team of highly seasoned professionals who make it their mission to put you on the map. Curtis has represented brands like PayPal, Tetris and the alien hunters of the SETI Institute. He is an active member of the National Lesbian Gay Journalist Association. Before moving into PR, Curtis was executive producer for KRON-TV, the nation’s largest independent television station. His work there earned him an Emmy. Business Insider has twice listed him as one of the Top Fifty in Tech PR.

Question: Curtis, how did you get here today to where you're at as a founder?

Answer: I would say the short, short version is I got here by being the person who would start work the earliest and work the latest, and would really regard any sort of PR opportunity like I would [be in] a newsroom TV interview, where you have to make something happen right then, right now, and not taking no for an answer. We kind of have come up with the whole motto, politely pushy, to reflect my time in TV news and PR.

Question: Instead of saying, "I'm reaching out, my name is," how should you be actually engaging and reaching out to potential journalists and editors and writers who might want to give you some love?

Answer: I would say that the best way to do it is of course start with research. What kind of person are they? What are they interested in? What do they like? What do they hate? What's their tweets been like? What have they been doing on social media? And then you can craft the appropriate pitch. Now my recommendation, overwhelmingly is to think like a news producer. And the first three letters of the word news are new, and so the first sentence is probably the most important sentence. And it should say, "There is a new blank in such and such," because you're trying to give a reporter the sense that they are going to be breaking something new, which is what reporters do. They break things. They tell you new things. And if there's not new in that first line, or not a sense of discovery, I as a reporter will just be like, "Delete, delete, delete."

Question: So one of the things that I think you just touched on is a giant mistake that we need to bring into forefront here, is you talked about personalization. You're not talking about going to decision, or critical mention, and downloading the giant database of everything possible reporter and writer and blogger out there, and sending them this generic pitch.

Well, I would actually be remiss if I said I haven't done that. And there are times when you got news, and you know a lot of people want to hear about it. And you don't have to be really tailored or anything to say, "Hey, the second coming is here. You might want to know about it." But there are times where you are looking for a person's particular point of view because you know that person will best be able to understand what you're talking about, why it's important, and communicate it in a meaningful way. And with PR, it's all about understanding the sort of cause and effect. And sometimes it's hard. Sometimes I screw up too. But I think the important thing to do is to game it out and think, "What's going to happen next, next, and next?" And a lot of times, people don't think about that, whether they're working on the PR side or the marketing side. And generally, what we try to do is say, "Okay, let's say we have a big news announcement and we want to make a big deal about it." Here's what we're going to do, and then let's say a story is published. What are we going to do next? And sometimes a CMO will say, "Well, the story's published. That's a success. That's great." And we'll say, "Absolutely not." That is just the beginning of the fight.

Question: Another mistake that I think people often make when they're approaching PR just in general, and trying to come up with what they're doing is also letting stories die. Right? So how do you work with your clients to make sure that you keep the kindling going, and that it's not just, even if something goes a little viral, how do you keep thumping air at it? How do you keep making sure it's alive and breathing and embers are flying?

Answer: There's kind of two schools of thought that really are a part of the same whole ecosystem. There's this idea of a lightning strike, and that's like we're going to take all these resources and focus them on this one big moment. And then there's rolling thunder, where we are going to make sure that month after month, week after week, day after day, we're doing something to make ourselves relevant to this. And I like to think that any good PR strategy is one that takes a look and thinks, "Okay, how can we be relevant to this upcoming news event?" And any good PR team is going to take a look at a calendar and think, "Okay, this is our main objective. How can we make this story relevant for March, April, May, June and July?" And how do we do it in a way that's authentic, so people don't roll their eyes and be like, "Talk to the hand"? Because we want to avoid that too.

At Bospar, we pride ourselves in being politely pushy. And partly, that's knowing how to read the room. And sometimes, the room's like, "Hey, this is not the time." And so we want to be mindful of that too. But we also want to be mindful that we get paid for results. So, our point of view is to make sure that we are being nimble enough with the news cycle. One of the things that I think a lot of people should consider is the idea of news jacking. And that is that there's a big topic that everyone's talking about, and the only way you are going to get in the news cycle is if you have something to say about said topic. And so what we'll do with a lightning strike moment, for example, is we'll say, "Okay, here's out lightning strike. And today, this news broke. We, from our lightning strike, have something that relates to the said breaking news story. Let's go and craft a custom statement, or let's share some research, or let's get something to a journalist about this."

Question: Any last parting words of advice to our listeners today?

Answer: I think my biggest piece of advice is if you see a news story that's compelling, and you are intrigued by it, to write down what you thought was interesting about it. By doing that, you're kind of doing the first part of PR, where you're analyzing news, and you're thinking how you could be a part of it. And sharing that with other partners is going to be the first step in really taking that PR journey and promoting whatever you need to promote, whether it's yourself, your company, or an idea. And I think being curious like that is transformational.

Curtis has so much great information from his experience in journalism and PR. Check out the podcast below to learn more about how to properly pitch your contacts like a professional journalist.