How Travel Influencers Adjusted To The Pandemic

It’s no surprise that the pandemic has absolutely shaken up the entire world. Travel came to a halt, and many people were left stranded in foreign countries due to strict travel restrictions. But what happened to those whose livelihood depended on travel? To say that travel influencers had a tumultuous year is an understatement.

Many travel influencers lost a lot of revenue because brand deals fell through and frankly, their content had become irrelevant; they can no longer pose with Chanel jackets on the streets of Rome or model bikinis at the beach in Bali. So, how did travel influencers keep their followers engaged throughout this year? In this blog, Hollywood Branded explores how travel influencers have adjusted to the pandemic. 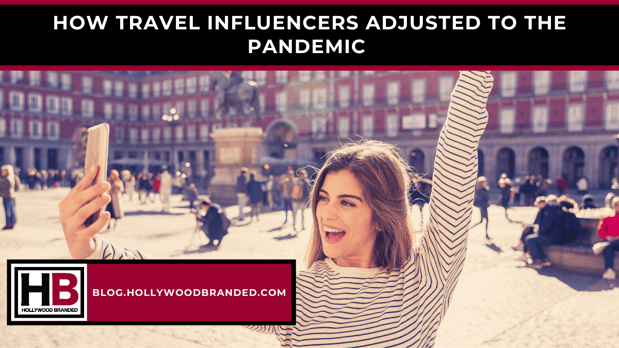 Always Think Before You Act...

Some travel influencers are being scrutinized by the public for traveling despite a contagious disease plaguing every corner of the world. Recently, a Russian social media star got deported from Bali for throwing a party that went against the country’s COVID-19 guidelines. Other influencers have chosen to adjust their content to fit the new "normal" lifestyle that allowed them to quarantine. Continue reading to look at the different ways travel influencers have adjusted to the pandemic and kept their stream of revenue alive during the past year! Murad Osmann (@muradosmann) is a Russian travel influencer with 3.8 million followers on his Instagram who was crowned the title of the top 3 travel influencers by Forbes. He and his wife are known for the #FollowMeTo series. With this hashtag, they post photos of him holding his wife’s hand as she leads him to a view.

At the onset of the pandemic, he stopped traveling and encouraged people to stay home. He created a challenge on his Instagram called #FollowMeToHome. He asked his followers to take creative pictures of themselves at home with the hashtag “FollowMeToHome,” and the prize on the line was an iPhone 11 Pro. Instead of partnering with resorts or hotels, he opted to partner with a tech company, called Honor, to promote bringing the magic to people’s homes. 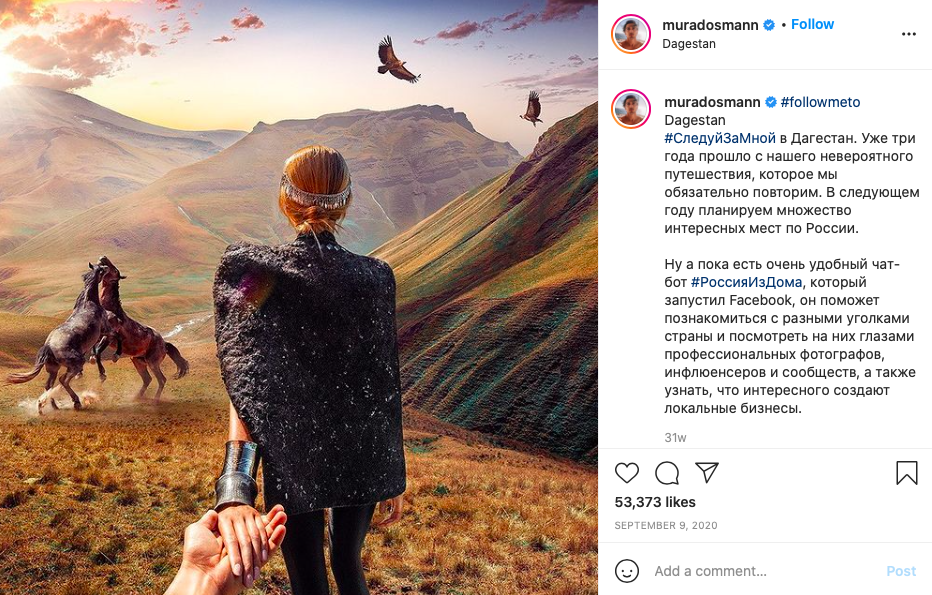 Oneika Raymond is a travel influencer with 108k followers on her Instagram. Not only is she a travel influencer, but she is also a TV host and an advocate for the BIPOC community. She posts travel pictures with her husband and daughter. As early as the beginning of March 2020, she addressed the pandemic on her Instagram, advising her followers to closely follow the instructions of health professionals in regards to traveling.

While Murad kept his captions short and let his followers immerse themselves in the picture, Oneika likes to open up about her personal life and daily struggles through her captions. In her posts during the beginning of quarantine, she consolidated lists for places that are hiring workers, shared resources to help with quarantine boredom, and discussed politics.

Oneika has been transparent to her followers about how the pandemic has affected her career that relies on travel. In one Instagram post, she wrote, “I was supposed to fly to the West Coast last night for a work project, but I canceled it. As an independent contractor, it means lost revenue, but the thought of bringing any potential harm to my daughter [...] gave me pause.” She also talks about the covert ways that she and her fellow travel influencers have lost revenue. For example, affiliate links are a substantial part of their revenue, and since their travel pages are getting less traffic, their revenue from affiliate links have gone down significantly. However, Oneika has used this time to publish a book, and she was able to land deals with brands like Hyundai and Stella Artois.

Like most other travel influencers, Oneika has resorted to posting pictures of her family traveling to local destinations in New York, where they currently reside. Now she posts more lifestyle photos, her daughter being the star of Oneika’s page. Posting photos in front of the kitchen, on a yoga mat, and in front of the bathroom mirror, Oneika still manages to keep her followers engaged! 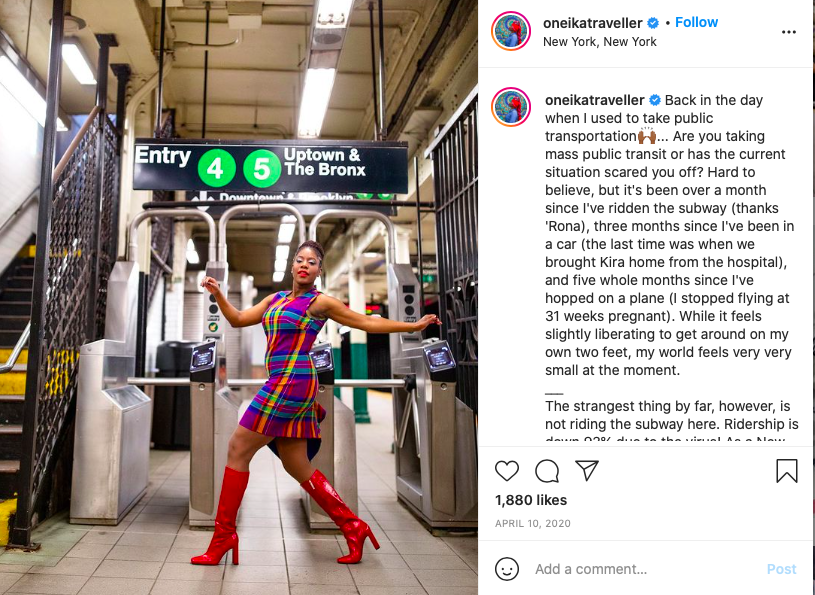 Now that we looked at travel influencers with a large following, let’s look at how a smaller travel influencer family repositioned their content during 2020. Based in the United Kingdom, the stars of Travelynnfamily are their mother, father, and their two kids. It is primarily the mother, Jenny, that documents their adventures. Since the beginning of quarantine, they started a series, counting the days in quarantine. They posted a new photo every day, starting with the caption Day 1. Influencers strive to post as frequently as possible to grow their page and keep their followers engaged.

Even before the pandemic, the Travelynnfamily’s photos were mainly of their kids playing outdoors. Therefore, when they went into quarantine, their content did not change as drastically as some of the other travel influencers on Instagram. As a family travel page, the Travelynnfamily had partnership opportunities with brands that target children. Some of the brands that the family worked with are Life Under Canvas (a tent company), ManiMe Kids (an animal-themed chair company), and Baker Ross (an arts & crafts company). 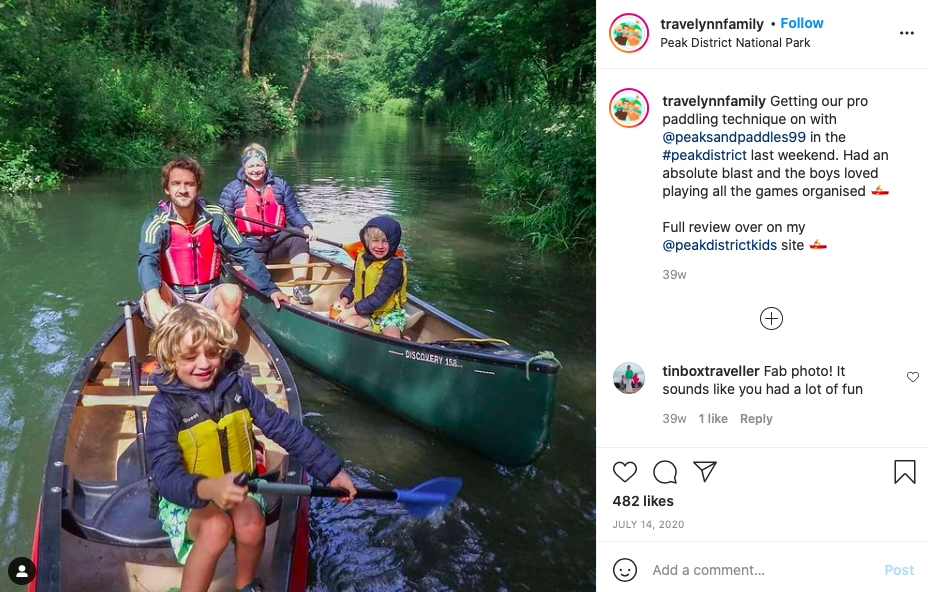 What Does The Future Hold For Travel Influencers?

As more businesses have been opening up, travel influencers have been partnering with hotels and resorts to promote more travel. However, it is pertinent that they are cautious with the type of message they send out because many influencers are getting canceled for their apathy towards COVID-19. People have become more skeptical after the pandemic started and are less likely to trust brands or the government. Therefore, travel influencers may become an important asset for promoting tourism in the upcoming months. Overall, there is more trust between a consumer and an influencer than a consumer and a brand. Therefore, to encourage safe travels once the pandemic is over, travel influencers may be the answer for companies desperate for travelers. The world will be watching travel influencers in the next couple of months as more people are yearning for change in their life. Dive deeper into other blogs by Hollywood Branded that talk about all things travel!

Are you an influencer, a brand, or just want to learn more about connecting brands with social influencers? Check out this free user's guidebook on how to do just that!