Celebrity endorsements can come in many different forms – especially now that the growing digital media sphere, is pushing boundaries as to how much diverse content can be created for distribution. Jimmy Kimmel and Matthew McConaughey are no strangers to celebrity endorsement.  For this year’s South by Southwest (SXSW) festival, they decided to indulge in the festival’s vibe of ‘keeping Austin weird’, while giving back to the local Austin community. As a result, the duo created three ridiculous commercials for the small time VHS and DVD video store, Vulcan Video. But what was Kimmel and McConaughey’s motivation to keep Austin weird with this hilarious spoof? 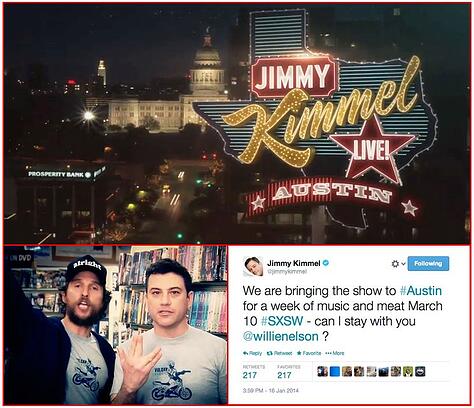 Kimmel has stated that the Austin community helped make him and his crew feel so welcome at last year’s SXSW festival that he felt that the show should return for the 2015 festival, and that he wanted to also give back to the Austin community.   This year, prior to his arrival for SXSW, Kimmel posted a tweet offering to help a small local business in producing a local TV commercial to promote the business. The tweet received over a thousand responses from eager mom and pop companies, and Vulcan Video in particular caught Kimmel’s eye.

What Will This Unconventional Celebrity Endorsement Do For Vulcan Video Stores?

Vulcan Video is an independently run, family-owned video store with two locations in Austin, Texas with a grand and diverse inventory of films ranging from foreign, cult and classic, to the latest new releases. Kimmel called in a favor from a personal friend who is a fervent Austin and Texan supporter, (and who just so happens to also be an A-list actor), Matthew McConaughey, and the two set off to create three comedic local TV ads for the video store.

The duo makes several references to McConaughey’s previous film characters, with several one-liners added to the sketch for comical value. McConaughey even finds a moment to drop in a reference to his Lincoln Motors endorsement, serving as a reminder of the partnerships – and adding Lincoln in to the spotlight once again.  Read more about McConaughey’s partnership with the Lincoln motor brand here.

Vulcan Video is expected to see business pick up over the up-coming weeks, with help from Kimmel’s ads. The free publicity from Kimmel and SXSW gives Vulcan Video a major PR boost as it’s competing against streaming video outlets Netflix and Hulu. The tongue-in-cheek ads are of a comedic nature, and the three ads are planned for local TV broadcast in an effort to boost publicity and sales for the retail store.

Assisting a local video store with their advertising efforts isn’t the only thing Kimmel is doing to give back to the Austin community. In its first video sketch from this year’s SXSW shows, Kimmel asked his sidekick Guillermo to step onto a scale and record his weight. Once recorded, Kimmel announced that the show would donate $2,000 to a local community charity, Urban Roots, for every pound Guillermo gains during the visit to the festival.

What do you think about Kimmel’s efforts to boost publicity for Vulcan Video and give back to the local community? We would love to hear what you think in the comments section below!