The phone call Lupita Nyong’o received a few weeks before accepting her diploma alongside her fellow Class of 2012 Yale Drama graduates would be a life-changing one.

Ever since she received that call from Steve McQueen saying that she’d been cast as Patsey in '12 Years A Slave,’ Lupita has catapulted to A-List status, seemingly overnight. Her highly acclaimed performance resulted in recognition and awards of all types, including the coveted “Best Actress in a Leading Role” Oscar. Not only has Nyong’o managed to establish herself as a seriously gifted Hollywood actress in less than a year, but her poise and slender frame has garnered her serious attention in the fashion world. 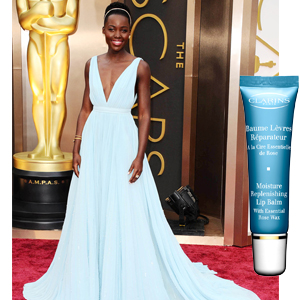 Thanks only in part to her nomination, she has been a fashion favorite on the red carpet all awards season, and has graced the covers of such top fashion magazines as W magazine, Vanity Fair and Dazed & Confused. From her film portrayal, to her red carpet fashion, and through her presence in interviews, Lupita has won over the hearts of many (keep an eye out Jennifer Lawrence). And it was very clear just how famous she has become during this year’s Academy Awards, before she had even accepted her Oscar.

When host Ellen DeGeneres collected money during the viral pizza stunt, Lupita handed over the only thing in her purse to help contribute to the cause - her Clarins lip balm. “Lupita’s lip balm! That’s worth something!” DeGeneres loudly exclaimed.

And how right she was. Overnight Nyong’o’s lip balm – the HydraQuench Moisture Replenishing Lip Balm, to be exact – sold out across the country. It was a viral hit on social media, complete with its own hashtag and GIF images. Aside from her role in Non-Stop alongside Liam Neeson, in theaters now, Nyong’o has not yet been confirmed for any other projects. Keyword: Yet. Not only is she now extremely sought after for film projects, it won’t be long before brands line up around the corner in hopes to ink a deal – and capitalize on those future lip balm in a purse moments.

Not only is she an immensely talented actress, but a unique, high-fashion beauty. She is well-spoken, educated., innocent, yet with quiet strength and sophistication. Her overall likeability, propelled by way of an aspirational, epitomized Cinderella story, make her the current dream brand endorser.

Hoping to give our brand a piece of the awards season spotlight? Check out our blog article!