Marriott Hotels are Re-Branding With Help From Content Marketing

Marriott Hotels recently announced their plans to develop, produce, and distribute several entertainment projects – particularly honing in on content marketing. The project has been designed with the millennial market in mind, and hopes to appeal to the millennial traveler by re-branding the Marriott image and bringing it into focus with a younger market.

Marriott Wants To Break Into The Millennial Market
Marriott has over 4,000 hotels in 78 countries, and is the world’s largest hotel company. Their new aim is to create entertainment and travel lifestyle focused marketing campaigns to tap into the millennial market – among other demographics. The campaign’s strategy has developed digital content with a particular focus on niche topics that can be easily purposed for the millennial’s digital media oriented lifestyle. Heading this new campaign tactic is Karin Timpone, who was named Marriott’s global marketing officer in 2013. Timpone has been quoted stating that her desire for this campaign is to create entertaining content that can be distributed across multiple viewing platforms, and that moves away from the traditional style of a hotel marketing campaign that focus on exclusively on selling rooms and speaking at consumers. 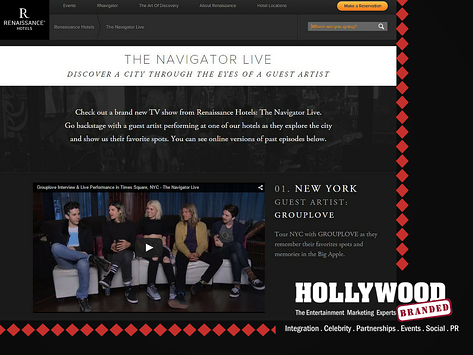 Marriott’s move into entertainment began with a partnership with AXS TV, with the production of “The Navigator Live,” a Renaissance Hotels branded TV series. The series features live performances by bands, and how they explore cities, restaurants and local entertainment while traveling and on tour.

David Beebe is the man running the new Marriott studio, and spearheading the project. Beebe has built the idea around the success of similar projects run by corporations such as Red Bull, with the obvious idea that if it worked for an energy drink maker like Red Bull, surely it will work for a hotel chain operator. With sights set on becoming the largest publisher of lifestyle, Beebe wants to turn Marriott’s current platforms into a network that can distribute entertainment.

Marriott will be self-hosting the content through their owned resources, which include websites, in-room TV, mobile platforms, and the Marriott reward program. These properties provide an established network to distribute and host entertainment.

Do you think your project has what it takes to be a brand vehicle?