When viewers watch movies, they often think that what they see on screen was what the writers originally wrote.  But in the case of product placement, that isn't quite what happens.  In fact, a brand can often have an active role at the table discussing how to better portray and position their brand within content.

Which is were our agency, and others like ours, comes in as we are experts at leading those conversations to ensure that the production doesn't lose their creativity and absolute sheer genius of what they have written, and that the brand isn't lost along the way, as the partnership is crafted.  In this blog post, Hollywood Branded shares a product placement case study and behind the scenes look into how one such partnership was create; and how Bumble made its way onto Candace Bergen’s iPad, and subsequently into the hearts of millions of women watching in theaters. 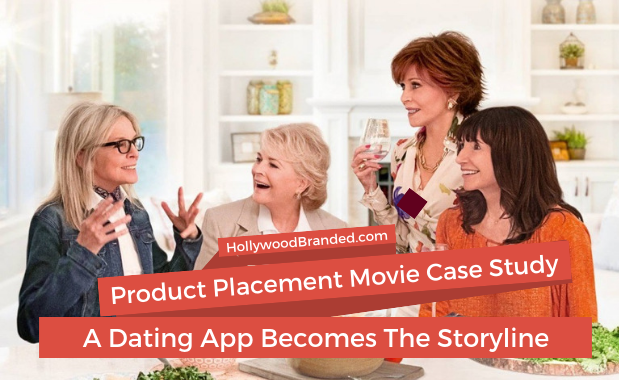 How It All Began

When we heard of a film that had a cast line-up of Candice Bergen, Diane Keaton, Jane Fonda, and Mary Steenburgen, our agency ears perked up immediately. Upon some further digging in the trades, we discovered that this soon-to-be-in-production film was about four women in their sixties who rediscover themselves after reading the iconically sexual series, 50 Shades of Grey. Learning this, our agency ears perked up even more, knowing that women living out such a scenario would be something not to miss. Needless to say, while we weren’t sure which of our clients would be a good fit, we were extremely excited to get our hands on this script. And boy, it did not disappoint!

Luckily, in addition to it being a hysterical script, the storyline organically complimented our dating app client, Bumble.

Check Out The Final Result

To see how the whole campaign came together, watch the video below!

A Perfect Fit!? Eh… Not Just Yet

As  many people know, especially millennials, Bumble is a social app, best known for its dating tier that allows users to swipe right on people they’re interested in. If it’s a match between both parties, the woman must initiate conversation, really putting women back in the driver’s seat. In addition to its dating tier, the brand had recently launched a professional section on their app, Bumble Bizz, encouraging users to form professional contacts on the app and Bumble BFF, allowing users to make friendship connections as well. The company is all about female empowerment- inspiring women to take control of their dating lives and now also their careers, solidifying why partnering with a cast of some of the strongest and most successful women in Hollywood was a no-brainer.

Reading the script for the then-independent film, Book Club, it was clear that Bumble would be a perfect fit. The characters were relatable and flawed, but the bond they shared made them fearless. However, the script was not tailor-made for the app, and in fact Bergen’s character was originally scripted to be using a different dating website. Website being the keyword here because while having production input different logos is easy, the method with which one uses an app versus a website is pretty different. In addition to these logistical changes, it was important for Bumble that certain unique features of the app were showcased. So because of these necessary additions to the script and in order to better control the brand’s messaging, we worked with the production to contractually guarantee exposure.

Getting The Exposure Right

As the world of production happens in a flash, we really only had a few days to come to an agreement on exposure terms. Together with the brand and the production, we worked hard (and fast!) to get to a point where both the brand and the film were happy with the ultimate outcome - and final distribution for the film to be determined, as it was not yet at this stage of the game. However, with a cast this strong, this really wasn’t a sticking point for anyone as no one doubted that it would be picked up.

Once the terms were agreed to, the tweaking of the script was underway. The overall exposure was already there in terms of clear logo shots and seconds on screen. However, from changing from an originally scripted dating website to an app, certain changes were inevitable - we had to make sure Bergen’s character was now using a tablet as opposed to a computer, and that when it was scripted for her to click on an image, she would now swipe right on that image. They were little things, but they’d add up and would have thrown off the brand exposure if they weren’t correctly addressed. We also took this time to ensure that certain app features, like Bumble’s SuperSwipe which allows you to show a potential match that you’re extra interested, was scripted into an appropriate scene that made perfect sense.

All of the above was a true walk in the park compared to work we did with the post production department. As there was truly SO much app usage in the film, there were many scenes that required Bumble’s (amazing!) graphic designer to create mock-ups of. We knew that this was going to make or break Bumble’s role in the film. The process was fairly turn-key, production would send us script pages, we’d pass them over to Bumble with any additional content that might be needed, and then Bumble would create the graphics for us to send back to production. However, as this was of course a dating app, we needed photos of the characters, animations of things like the SuperSwipe, app notifications, etc. for everything to truly align and fall into place.

Once everything was finally locked in place, we were sent a clip of the film’s Bumble exposure for approval before the final version was released in theaters. However, we still hadn’t heard just who would be releasing it in theaters…

And then it was announced! Paramount Pictures would be distributing this film. Independent films often don't have a major distributor pick up their films until after post-production.  This allows the film to be managed entirely under the care of the production company, and then marketed by the studio.

Having Paramount come on board was of course exciting because with such an iconic studio, the prestige of the film was automatically heightened, but also very promising because we knew that with such a company backing this film, more marketing dollars would be allocated to advertising its release.  And more people would see it!

Given Bumble’s 30MM+ plus userbase, the platform is a phenomenal opportunity to promote a film. This was always an option in the back of our minds, but we couldn’t really explore it until there was a distribution partner in place as a co-branded promotion would be directly tied to this distributor. Once we got the confirmation that Paramount was on board, we reached out to our friends in the company to start brainstorming some ideas.

Given the strong the friendship the four leading ladies had in the film, running the promotion on Bumble BFF, the tier of the app that encourages users to make friendship connections, was the most natural fit. Tying into the Arizona plotline of the story, thanks to film assets from Paramount and a hotel partnership, Bumble BFF was able to give a user a trip for her and a friend to Arizona where they could enjoy an all-inclusive girls weekend.

It worked like this… As users were swiping for potential new BFF’s, instead of a fresh face popping up, the below in-app card would pop up, promoting both the film’s release and the chance to win the trip. 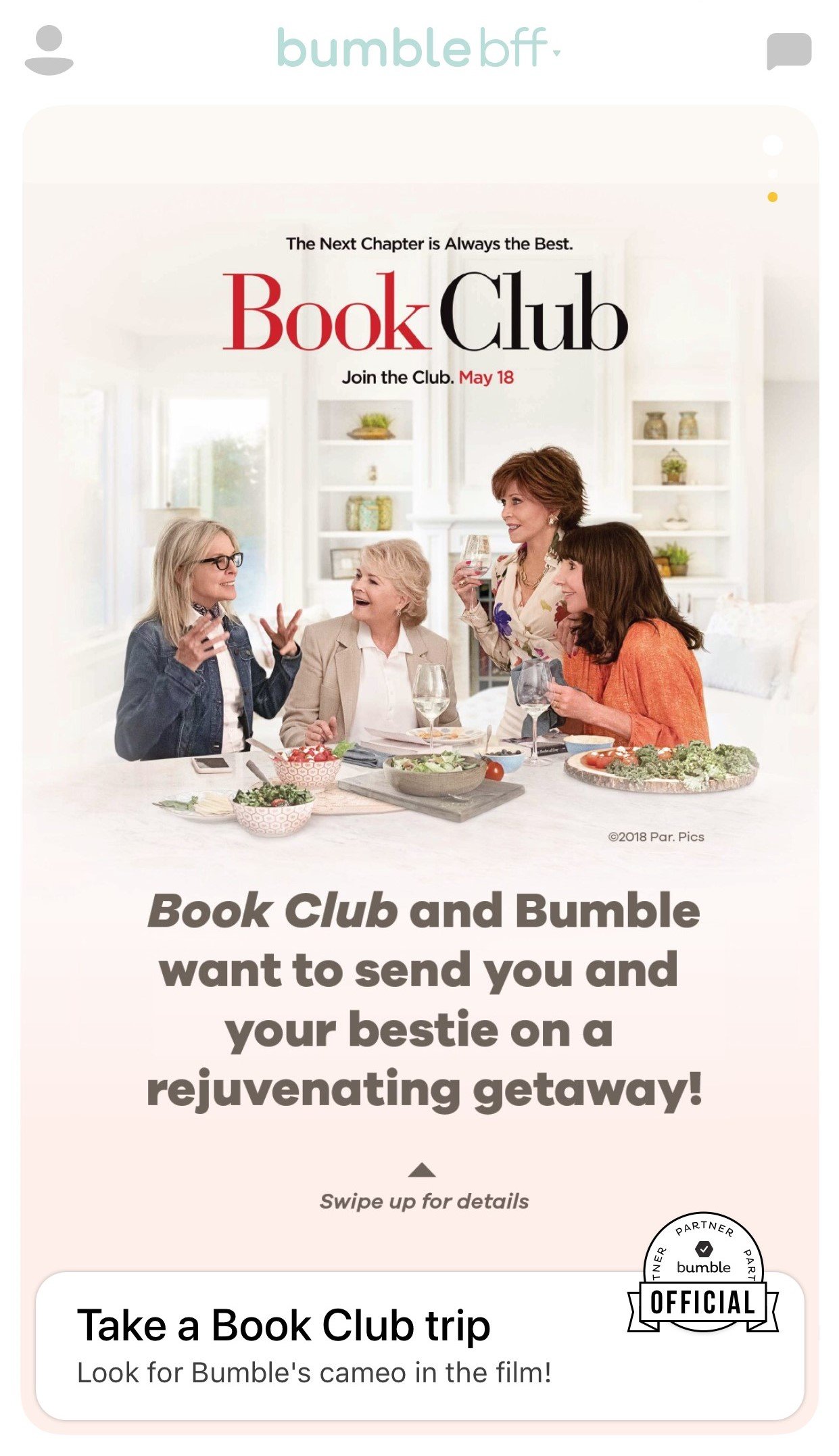 If the user was interested (and who wouldn’t be!), you’d ‘Swipe Right’ for more details, which would prompt the following in-app card that would then open up a messaging conversation allowing you to enter the contest. 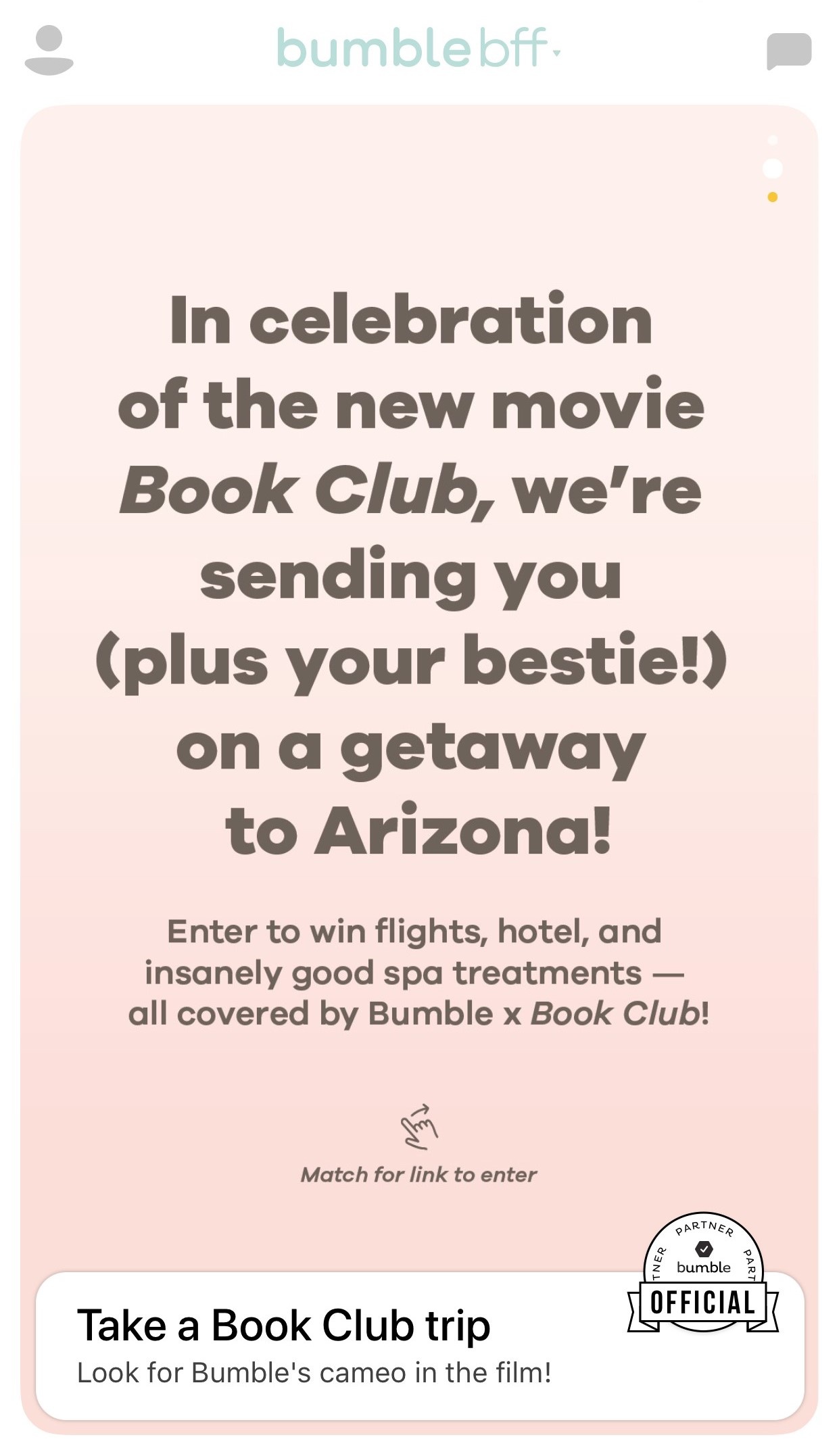 This was great for the film because the app allowed Book Club to reach a whole new audience and further promote its release. It was great for Bumble because in addition to offering their users a cool trip giveaway, they had license to run images of such esteemed actors in their app, images that would have costed a TON of money to run otherwise.

The icing on this co-promotional cake was Bumble’s appearance in not one, but two nationally run Book Club trailers. So while Bumble was helping to promote the film in-app, Paramount was giving Bumble some promotion as well in these two trailers that ran for over three weeks in prime time programming.

Here’s one of the trailers below – you can check out Bumble right at the beginning!

The brand not only received phenomenal exposure in both the film and the trailer, but also extensive media coverage.  The press from the movie was also a delight, calling the film, “nearly impossible to resist” and “a must-see for audiences looking for a feel-good movie that lifts you up”, and media outlets  provided extensive coverage of Bumble’s partnership with the film, with over 500 mentions reaching over 35 million additional readers in the USA alone.  The in-app promotion of the film gave this partnership additional legs to stand on, and allowed the brand partnership to be accessible to both viewers of the film and users of the app.

Catching It On The Big Screen

While we already knew what the Bumble exposure in the film looked like, thanks to that earlier video from production, seeing it organically woven into the film was an incredible pay-off! The app scenes in the film played an integral role in the story, offering the brand once in a lifetime exposure in a film of this caliber. This truly was the right people connecting at the right time. The film was a success critically as well! The print and digital media provided Bumble tremendous additional coverage, and the in-app promotional partnership was the icing on the cake!