Top Brand Partnerships With The Lego Movie 2: The Second Part

A Step By Step Guide To Co-Promotional Success

Five years later the highly anticipated sequel to the box office hit The Lego Movie is back, and this time they've brought a host of creative brands who sought to become master builders of unique brand campaigns.

So, what kind of partnerships came to be from these tiny colored bricks? We're glad you asked. In this blog, Hollywood Branded brings you the top brand partnerships with The Lego Movie 2: The Second Part. 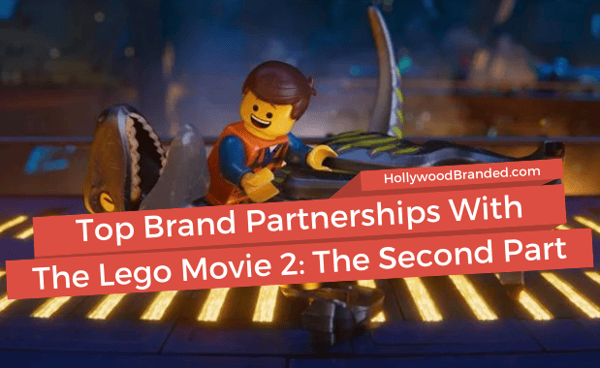 Everything Is Awesome... Again!

The citizens of Bricksburg face a dangerous new threat when Lego Duplo invaders from outer space start to wreck everything in their path. The battle to defeat the enemy and restore harmony to the Lego universe takes Emmet, Lucy, Batman and the rest of their friends to faraway, unexplored worlds that test their courage and creativity.

Reprising their roles in the recording booth Chris Pratt returns as Emmet, Elizabeth Banks as Lucy (Wyldstyle), Will Arnett as caped crusader Batman, with newcomer to the cast round Tiffany Haddish lends her voice as Queen Watevra Wa'Nabi.

The Warner Bros. animated feature opened in theaters February 8th with a $34M box office total, about half of what the original flick, The Lego Movie, grossed in 2014. At the worldwide box office the sequel raked in a total of $153M for the month of February, according to Box Office Mojo. However, with the final installment of the Dreamworks powerhouse franchise, How To Train Your Dragon, How To Train Your Dragon: The Hidden World flew into theaters end of February, and early figures suspect the Viking and Dragon duo to take top spot for early March.

Stats aside, we know you're here for the brand campaigns. So, let's take a look at who claimed the top spots! 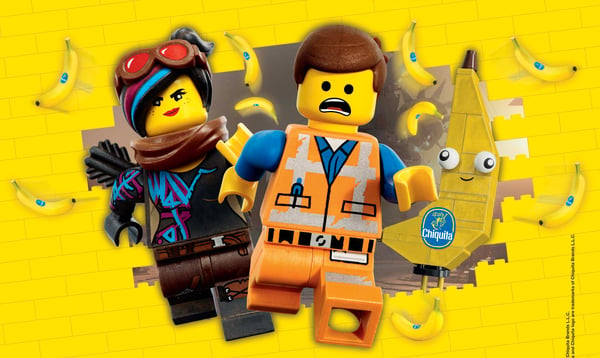 To kick off our list of the top promotional campaigns comes a brand that The Lego Movie 2 found highly a-peeling: Chiquita Bananas. The global partnership kicked off mid-January and ran during a four-week period leading up to the February 8th release date of the movie.

The partnership also included a sweepstakes in which fans could enter codes found on Chiquita Bananas online for a chance to win tickets to see the film in theaters as well as brick sets and Lego E-Gift cards. In addition, Chiquita unleashed 300 million blue stickers featuring the most recognizable characters from The Lego Movie 2, including Banarnar, a Lego brick-built banana character making his big screen debut.

To bring the Lego Movie fun to breakfast tables and lunch boxes across the globe, Chiquita also developed healthy and delicious film-inspired recipes that encouraged building and teamwork among shoppers and their families. Our team took a look at the recipes and some of our favorites were Lucy’s Chiquita Banana Master Builder Cheesecake, and the Easy Peachy Keen Chiquita Banana Smoothie. For the entire recipe please visit Chiquita's website! 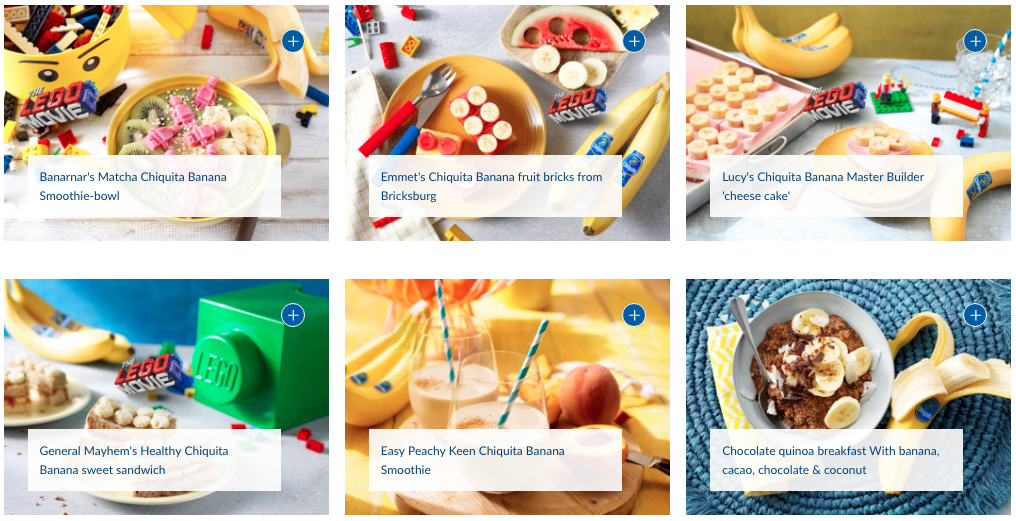 For a promotion thinking outside the building block box, Chevrolet partnered with The Lego Movie 2 both in a product integration deal in the animated featured but also in a promotional campaign on the back-end. Earlier this month the automotive company announced that a Lego version of its redesigned 2019 Chevrolet Silverado will appear in the film, which hit theaters February 8th. Ahead of the feature release, Chevy dropped an ad featuring Emmet and Lucy riding in a Lego-ized Silverado.

In the official press release published online US VP of Chevrolet Marketing, Paul Edwards, said: “From Emmet’s custom High Country to the real-life Trail Boss that inspired the full-size Lego brick model, we have a Silverado for everyone — both Lego mini-figures and everyday drivers,” Edwards continued, “The new ads are a fun addition to our Silverado campaign and will hopefully attract the next generation of truck buyers to Chevrolet.”

In promotion for the film, Chevrolet unveiled a life-size version of their 2019 Silverado 1500 pickup constructed entirely from Lego bricks at the Detroit Auto Show during the public-access days. The truck is the result of more than 2000 hours of work from 18 Lego Master Builders, and a truck-load of imagination. The Lego Silverado boasts 334,544 individual pieces, with the most common brick used being the red two-by-eight-inch piece, which proved to be the perfect fit to make the model match Chevy's red LT Trail Boss with long bed.

The model was shockingly accurate compared with the real thing in its size and design; it even has working lights. The partnership was promoted at the auto show and across both companies' social media channels. 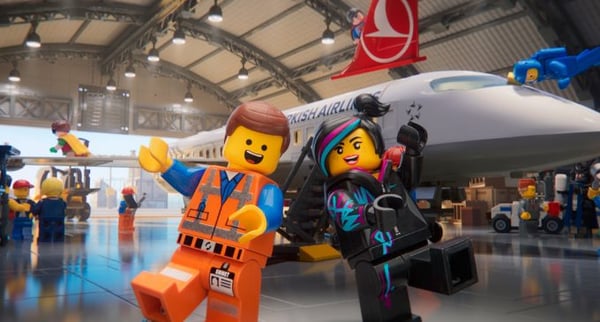 Our last brand partnership comes in a promotion that flew to new heights as Warner Bros. and Turkish Airlines teamed up for a creative campaign. The pair put together a brand new in-flight safety video that begun showing on all of the airline’s flights prior to the February release date.

Back in August 2018, Turkish Airline's debuted their first-ever Lego passenger safety video, which was also inspired by the Lego Movie franchise. Fast forward to now with the release of the eagerly anticipated sequel to the blockbuster hit The Lego Movie, the airline debuted a sequel of their own with a second inflight safety video featuring Lego characters, which will be shown on all flights starting March 1, 2019.

The second video features Emmet, Lucy, and new comers from the cast of The Lego Movie 2 with Lego Batman himself at the helm, as the director of the 4 minute 27 second film. Alongside the animated leads, the safety video also features some of Turkish Airlines’ most recognizable destinations, bringing them to life, brick by brick. The video journeys across five continents, visiting Bali, Moscow, San Francisco, Rome, Cape Town, Hong Kong, Tokyo, ending finally at Turkish Airlines’ iconic new home: Istanbul Airport.

According to the airline, 30 different versions of the safety video were created, both in English and Turkish, to cover the safety particulars of the 15 different airplane models in the Turkish Airlines fleet. 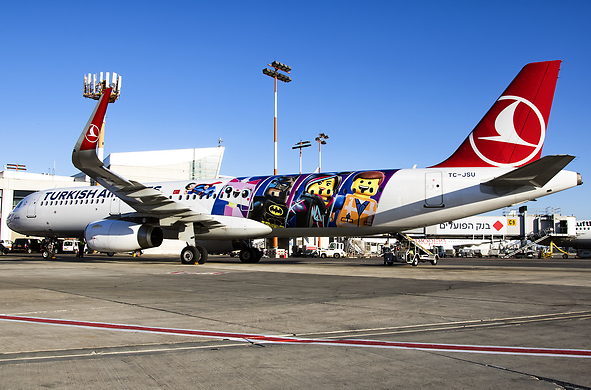 In addition to the in-flight safety videos Turkish Airlines also rolled-out a global TV campaign, Lego-themed wrapped airplanes, in-flight and in-airport activations. From their official press release published online M. İlker Aycı, Turkish Airlines’ Chairman of the Board and the Executive Committee said, "With one of the youngest fleets in the world, Turkish Airlines continues to build on its peerless brand experience. We are excited to present our passengers with this new innovative safety video as we prepare to make our move to Istanbul Airport, designed from the ground-up to be an unprecedented experience by itself.”

Want To Build Your Next Successful Campaign?

Want to learn how your brand can become a part of the film itself? Spread awareness and increase sales for yoru brand through product placement! Download our free e-book to learn more about the process.