If you were asked to name a young Hollywood star whose name attached to a project alone has the ability of commanding large audiences to see a film... who comes to mind?  In a poll we asked the same of our followers, and the most common response? Jennifer Lawrence. And with her new movie Joy just weeks from release (and already getting praise!), we aren't so surprised.

Opinion: Who is a young Hollywood star today whose name attached to a film alone has the ability of commanding large audiences? #TellUs!

Hollywood Branded takes a look at why Jennifer Lawrence makes such an ideal celebrity endorsement partner.

This year has definitely been one for the books for Hollywood’s hottest young actress, who has had the number one spot on People With Money’s Top 10 Highest-Paid Actress List with $96 million in combined earnings.

Not only is the actress the powerful leading lady in the mega blockbuster Hunger Games franchise, which made her the highest-grossing action heroine of all time, but her versatility landed her an Oscar win for her role in Silver Linings Playbook. Oscar buzz is already beginning to accumulate this year surrounding her role in Joy, the new David O. Russell flick that hits theatres Christmas Day.

And it goes well beyond her talent. From candid interviews, to tripping on her way to the Academy Awards stage to accept her Best Actress-win – with every move she makes, her fan base grows.

She is extremely likeable by all types of audiences, which is one of the reasons why the Hunger Games franchise saw such successful. Women love her because of her realness – the fact that she seems to be well-grounded despite her overwhelming success.

Her ability to laugh at herself and not just accept, but embrace, her “imperfections” is endearing. She is not the typical Hollywood Barbie Doll. She is confident, she is self-aware. She is funny and relatable (have you searched her online memes lately?). And for the same reasons that she is admired by women, she appears sexy to men. 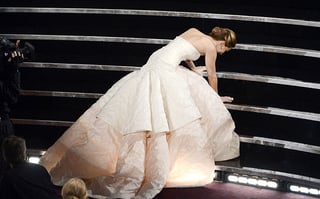 Jennifer Lawrence Falls As She Accepts Her Academy Award (in Dior, of course)

With all that being said, it's no surprise when corporations begin to engage her as their celebrity endorser – after all, she’s America’s current sweetheart.

Lawrence has been the face of Dior since 2012. This lucrative contract, along with her most recent Hunger Games film and her upcoming movie Joy have made her the highest-paid actress of 2015, according to Forbes, who estimated she will have made $52,000,000 by the year's end. Because she has only worked with Dior and has unlimited potential for brand endorsements, we are interested in seeing who will succeed in inking a deal with one of the most influential, versatile and widely-appealing young stars today. Such a massive and active fan following like Lawrence's is also crucial for a perfect endorsement. 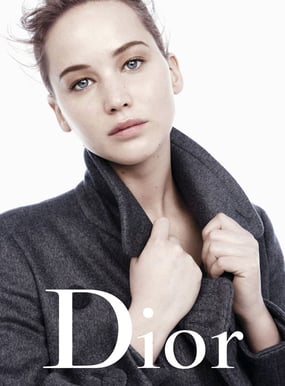 Your Brand Could Benefit From A Celebrity Partner!

Are you interested in learning how to successfully partner celebrities to your brand - without spending a million? Watch this short webinar to learn Hollywood insider tricks to create and kick start an entertainment marketing campaign that is the perfect extension for your social media program.