Ethan Hunt is back, and he's here to save the world... again, in an action-packed, high-octane, edge of your seat summer blockbuster you won't want to miss! With every huge franchise comes even larger than life brand partnerships, with some of the most creative, unique, and memorable promotions the ad-game has to offer, and this film is no exception.

With a sure fire box office win, this franchise sequel is again one of the most talked about films of the summer.  In this blog Hollywood Branded brings you the top brand partnerships with Mission: Impossible - Fallout, no stunts or safety harnesses required. 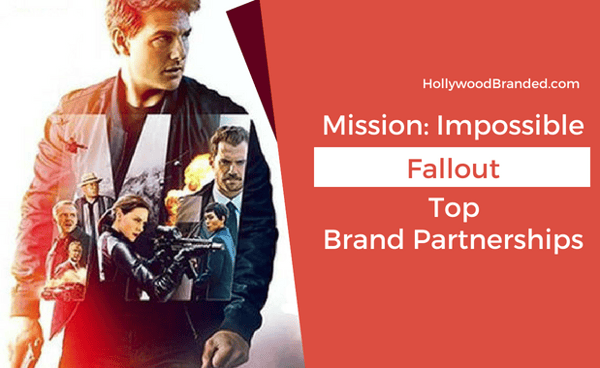 Six Movies Later And We Still Can't Get Enough Missions!

Even since before the movie's release there has been buzz circulating the latest installment of the Mission: Impossible franchise. After lead actor Tom Cruise, reprising his role as Ethan Hunt, broke his ankle in a horrific stunt accident during filming - which set production on hold for several months - all eyes have been on Fallout.

With returning cast such as Tom Cruise, Simon Pegg, and Rebecca Ferguson, not to mention new addition of the Man of Steel himself Henry Cavil, Mission: Impossible - Fallout promised to take audiences on a whirlwind, white-knuckling experienced. And they delivered.

Upon hitting theaters, the highly anticipated film boasted large numbers and broke the internet, or in MoviePass's case, breaking their App. According to Box Office Mojo Fallout tore into theaters with the best opening weekend in the franchise's history, with a $61.5 Million total rake-in for the three day debut. As of this writing, Fallout sits pretty on an estimated $366 Million throne worldwide, and the numbers only keep climbing.

Which is not only good news for Paramount Pictures, but also the brands who have partnered with the film, who are now basking in the afterglow of massive success. So, just who are these brands? Well, you've come to the right place.

First on our list comes as no surprise, as this luxury automotive company continues their relationship with the high-octane franchise. Long time Mission: Impossible fans will likely have noted the various BMW partnerships and placements over the years such as the BMW i8 hybrid sportscar, a new F80 M3 and the S 1000 RR Superbike. This time around, the sixth installment gets even more toys to play with.

In a promo released by the BMW's official YouTube account in early June preceding the film's release, we ride alongside Tom Cruise, or should we say Ethan Hunt, as he takes the E28 BMW 5 Series on a high-speed chase through Paris to the upscaled version of the infamous theme.

Also notably, from the BMW Motorrad department, Cruise picked the retro roadster, the R Nine T, largely described by several custom builders as a “blank canvas when it comes for customizing. The motorbike is featured in the full-length trailer for the film, tracking Ethan Hunt during another speeding chase.

Every one loves GIFs (Jiff? G-iff?) however you say it, there's no denying that GIFs are just about everyone's guilty pleasure, whether it's reading an online article, one of our blogs at HB, or even just sending an online message. And in the spirit of taking things to another limit, just like Ethan Hunt's team in the Mission: Impossible franchise, one company sought to reinvent the GIF.

Over at Gfycat they've reinventing the standard 2D GIF by creating a 360Loop. In partnership with Paramount Pictures, Gyfcat launched an exclusive series of 360Loop GIFs in anticipation for Mission: Impossible - Fallout's release.

Hitting the web a few weeks before the movie launch, 360Loop comes as a media format that puts the viewer front and center within the content, by having the action wrapped around them in a fully immersive experience. Fans had the chance to join Ethan Hunt during his death-defying stunts... from the comfort of their computer screens or phones screens (phewf!). In the interactive GIF the viewer takes complete control of their POV, using their mouse to shift the environment, bringing everything to sight around them similar to a 360 VR experience.

On mobile, the 360Loop uses the phone’s gyroscopes to allow the viewer easy navigation of the content. The totally immersive 360Loop GIF clips from Mission: Impossible – Fallout aare not only incredibly cool, but also give access to raw behind-the-scenes look at just some of the stunts Tom Cruise performed for the film. Fans are encouraged to visit Gyfcat's website to check out the six other 360 experiences from the film.

For the record is G-iff... nothing can convince me otherwise.

Rolling out next comes a hilarious campaign from one of the more unlikely partnerships to come from this film. Uber teamed up with Mission: Impossible - Fallout to highlight the company's slogan of 'getting your side hustle on'... which is perfect if you're Tom Cruise's stunt double, as we see in the exclusive video.

In the video we get to a behind-the-scenes interview with Tom's 'stunt double', Cooper Adrian, who spends the entire production waiting in the wings as the do it all actor handles all his own stunts. What does he do with all that extra time in order to make some money? He drives with Uber of course! Even when the actor breaks his ankle, shutting down production for eight weeks (which is also made reference in the video), Adrian continues to roll in the dough.

At the end of the video the stunt double calls out to Uber's live stream of the red carpet, featured on their YouTube TV channel two weeks back for the premiere of the film, where Uber was named the sponsor of the red carpet.

Along with the red carpet, Uber also had a sweepstakes contest, exclusive for Uber users who could use their account information to enter for a chance to win tickets to the premiere in Paris. 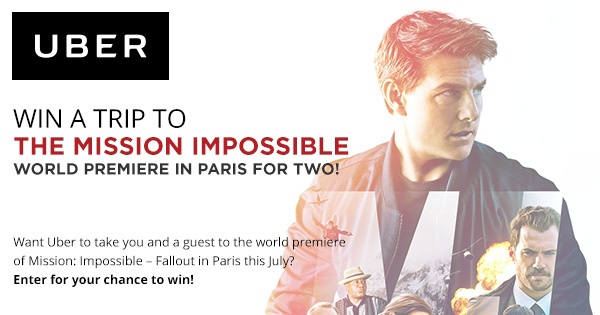 As a nod to the European demographic, an overseas partnership with the film also takes a hilarious take on the franchise, in a brilliant campaign.

In the ad aptly titled 'Mission (Very Much Made) Possible with Eurotunnel' it showcases the highlights of travelling with Eurotunnel, such as the convenience, and general ease, during the route from Folkestone to Calais in about 35 minutes. The video also shows classic Mission: Impossible-esque imagery with the twist that proves taking your family on vacations are in fact a mission that are made possible by Eurotunnel... along with the unforgettable Mission: Impossible theme music.

In an interview published online by Marketing Communications News.com, Marketing & Sales Director for Eurotunnel, Jape Hopkins, said, “This was such a fun project to work on, and we’re really excited by the unique and original partnership that Drum has created to deliver our new multi-media campaign.  We are thrilled to have captured the ease and convenience of a family journey to France on our shuttle, whilst using iconic music and references from the Mission: Impossible films and adding a bit of humour. It’s a great representation of our brand.”

Think Marketing Is An Impossible Mission? Not Anymore!

Your mission (should you choose to accept it) will set you on the path of success, and Hollywood Branded is your go-to team.

Product placement is an excellent way to grab consumers attention on an engaged platform, which we discuss in our blog Easy Affordable Consumer Engagement Tactics as well as in our team's blog 5 Ways Brand Marketers Secure Product Placement To Increase Sales.

And if you want to learn more about how you can make product placement and co-promotions work for your brand, download our e-book below to get our insider's tips and tricks head start on creating success!