10 Celebrities Who Sell Brands With Their Voices

Can You Identify Celebrities By Their Voice?

And it's not just their image - celebrity voices can be just as powerful. And while you may not have realized some of these celebs voiced the commercials they're in, your subconscious recognizes their voices... and you may be surprised at who they actually are.   In this blog, Hollywood Branded looks at celebrity endorsement ads for 10 celebrities whose voices are used to sell brands. 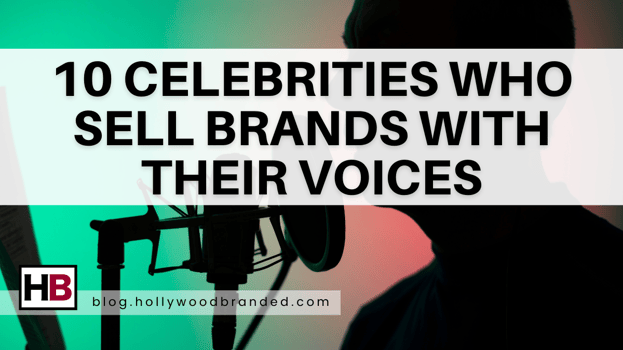 The actor behind The Office's lovable Jim Halpert has been the voice in the Esurance commercials since 2011. For some reason, TV's favorite goofball makes buying insurance seem far less stressful - just with the sound of his voice. And it must be working after 5 continual years as the voice of Esurance.

Mad Men's Donald Draper can sell just about anything under the sun. And apparently, his voice can too. Jon Hamm, who played the suave advertising exec has been lending his velvety voice to Mercedes Benz since 2010.

Hamm has also done voiceovers for American Airlines, however, it is his Mercedes Benz commercials that really catch the ear.

He also has voiced video brochures for high-end makes such as the Mercedes-Maybach S600.

Okay, okay so this one is definitely recognizable. Which is also what makes it such a great one.  Yes, he immediately lost a newly running voice campaign that was part of Vancouver's metro bus system - or at least it was put on hold when the sexual-harassment allegations were made, with the ultimate results still pending on both whether Vancouver will return to using his voice, and what may come of those allegations.

Morgan Freeman has probably the most recognizable voice in the entertainment industry, narrating everything from March Of The Penguins to 30 For 30. His voice is confidence-inspiring, smooth, and with a certain amount of gravitas that makes you just want to go out and sign up for a Visa.

Whether you realized it or not, the actor who played the famous Lieutenant Dan in Forrest Gump now voices commercials for the Army.

Perhaps it is the actor's experience playing a veteran or his extensive history of support for veterans and servicemen and women that makes him a perfect man for the role.

Whatever it is, his voice has become synonymous with the Army Strong commercials:

Whenever her calming voice comes on the radio or TV we know Kaiser Permanente is about to sell us healthcare. "Live well, be well, thrive." Right?

What some of us may not have realized is that the voice behind the Kaiser Permanente commercials is Allison Janney, the seven-time Emmy winner, and star of the legendary political drama The West Wing.

Her voice is absolutely perfect for the spots and has become synonymous with "thriving".

Back in 2012, Nationwide Insurance picked Julia Roberts to voice over their commercials. According to the Senior VP of Brand Marketing at Nationwide, Jennifer Hanley, "Julia Roberts’ voice brings an assuring, confident tone to the campaign that resonates well with our target audience." After watching the commercials (click below for a sneak peek), I'd have to say that I'd agree.

The singer has been featured in a number of commercials for many large companies, including ones for CoverGirl and Jenny Craig. With talent like that, it's no surprise she's been sought after by so many brands, including Pizza Hut. According to Pizza Hut's CMO at the time, Tom James, Queen Latifah's voice would help them maintain their family-friendly image, but would also help them come across a bit more "hip." Check it out yourself!

Lisa Kudrow's face is very distinct, and so is her voice! In fact, she's done a ton of voice-over work, and even has a reoccurring role as Wanda Pierce in the cartoon-comedy series BoJack Horseman. In addition to this gig, she did voice-over work for Yoplait.

The colorful visuals align perfectly with Lisa's quirky personality and casual commentary. I mean, Lisa was obviously the perfect choice for this ad.

Most of us recognize Stanley Tucci from either his quick-witted character, Nigel, in The Devil Wears Prada, or as the flashy Caesar Flickerman in The Hunger Games. Based upon how he's cast and how he carries himself, Tucci comes across as a rather professional type of guy with a strong stage presence. That being said, having him voice-over a flashy and exciting AT&T commercial such as this one, makes perfect sense.

In 2012, mega-star Matt Damon became the voice for TD Ameritrade, and before him, actor Sam Waterston played the role of TD's frontman. Damon was chosen in an effort to try to add more edge to their image, and better compete with their competitors.

Could Your Brand Marketing Use A Celebrity Boost?

Celebrities can elevate a brand with just the sound of their voice, and the power of their image.

There are several options for brands who want to partner with celebrities -- and not necessarily spend six figures in doing so.  From product placement on TV to sponsoring the events celebrities attend, to social media partnerships, brands today have tremendous options for leveraging that star quality on their own brand. Be sure to check out these blogs our team wrote on how to best work with celebrities!

Are you interested in learning how to successfully partner celebrities to your brand - without spending a million?  Watch this short webinar to learn Hollywood insider tricks to create and kick start an entertainment marketing campaign that is the perfect extension for your social media program: