While the countdown still may be on until Solo: A Star Wars Story hits theaters, some of the brands helping to promote the movie have been recently named by way of Lucasfilm. While product placement is pretty much impossible within the film franchise due to it being a long time ago and in a galaxy far, far away... that doesn't stop brands from leveraging the film by bringing it into their own advertising platforms.  A little Star Wars star dust can be incredibly beneficial.

The six brands signed on for worldwide promotional campaigns – while familiar with Star Wars movie leverage and even vaguely expected – still bring added excitement to awaiting fans… and we'll tell you how.  In this blog, Hollywood Branded brings you the six brand partnerships for Solo: A Star Wars Story who’ll take us back to our favorite galaxy far, far away, and explore how their strategic promotional powers are a force to be reckoned with… 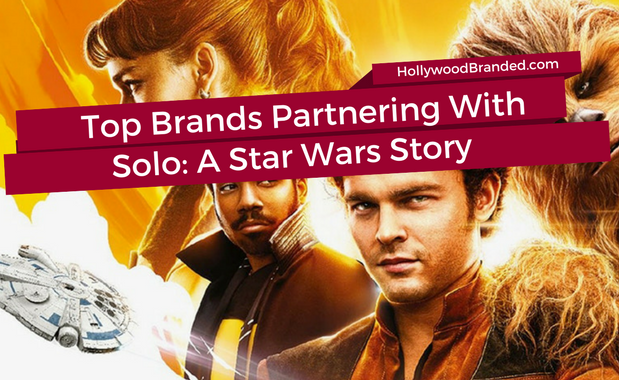 With the highly anticipated teaser trailer’s drop during Super Bowl LII came a bevy of mixed reactions, as fans still chewing on Star Wars: The Last Jedi and its bold new direction remained hesitant with the latest addition to the franchise. Despite having all the ingredients of success in its crew – most notably -- Director Ron Howard, and cast including, Donald Glover (to play a young Lando Calrissian), Woody Harrelson (The Hunger Games), Game of Thrones star (recognizable as the Mother of Dragons) Emilia Clarke, and leading man Alden Ehrenreich as Han Solo, the spark that was once seen with Star Wars: The Force Awakens has yet to be reclaimed. 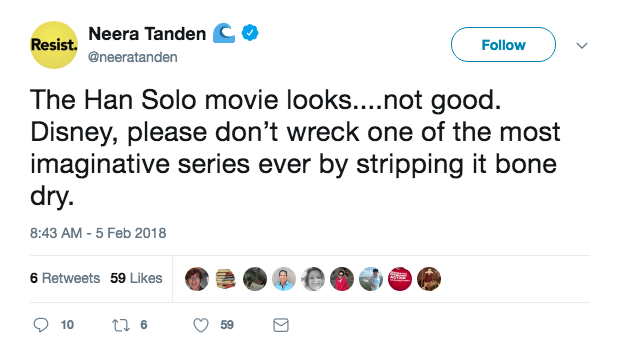 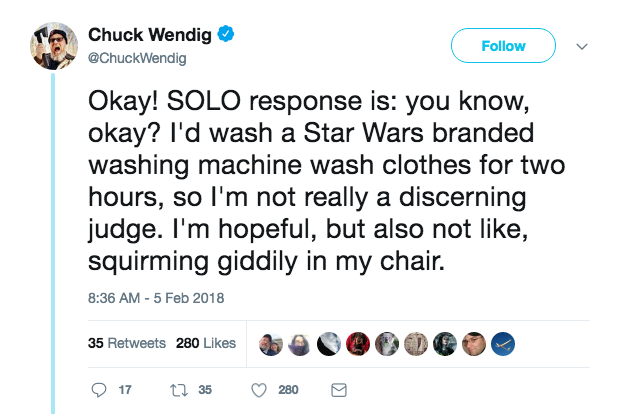 In the trailer we see young Solo, painted as the cocky, ruggedly charming, young pilot we love in search of a greater destiny, singing a common tune as previous Star Wars films. However this time it comes with a darker tone as the new wave of cinematic films have given us with Rogue One: A Star Wars Story, and recently Star Wars: The Last Jedi.

With the movie's pending release date, May 25, drawing closer, the hype has begun to set in, and the promotional campaigns are primed to capitalize, rolling out their own teasers (in less than twelve parsecs).

Of the six Lucasfilm named brands joining in on the promotional journey there are (as expected) some returning favorites to the lineup, as well as new-comers seeking to capitalize on Star Wars success. The first of these familiar faces being, you guessed it, Nissan.

This is not Nissan's first intergalactic rodeo when it comes to Star Wars, having partnered with the franchise for the past two installments, Rogue One: A Star Wars Story (with promotional tie-in of the Nissan Rogue) as seen below.

And Star Wars: The Last Jedi, which gave us seven new character-inspired vehicles, and an awesome commercial featuring Captain Phasma herself.

Nissan will continue riding the lightning with the upcoming Solo feature, and has fans waiting in anticipation for what they'll unveil next. To learn more about Nissan's success check out our blog Inside Nissan & Star Wars: The Last Jedi Partnership.

Another returning brand comes in the form of General Mills cereal, who boast a long-time relationship with the franchise, since the very beginning in 1977 in fact! In a blog published by the company, they reminisce about their journey together and are undoubtedly already prepping the shelves for the next batch of products for Solo.

Next up is one of America's largest full-service family restaurant chains, Denny's. Per the release of the teaser trailer the company Twitter account posted a teaser of their own. The Solo special menu is set to hit the diner chain starting April 3rd, so make sure to mark your calendars and set a course to your nearest Denny's! 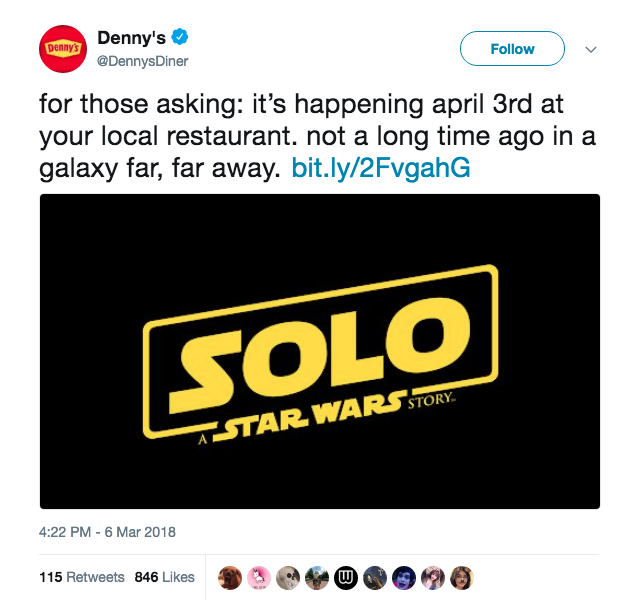 Another, and probably the most note-worthy newcomer to join in on the fun is none other than Solo Cup. With the brand's name nearly synonymous with the feature thanks to working title 'Red Cup' during filming, a promotion between the infamous beverage container and the similarly named space pirate was all but certain. And no one is more excited than the company (rightly so, of course). 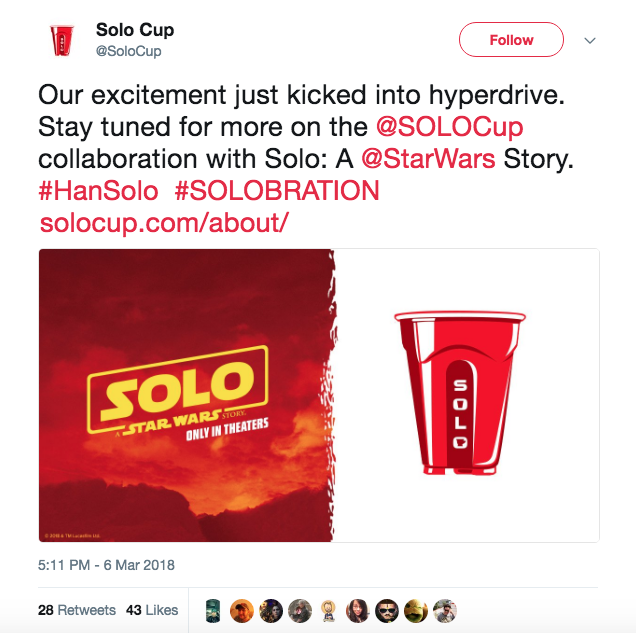 The company tweeted out this post in anticipation for the campaign with the hashtag #SOLObration, and teaser art of what appears to be a promotional Solo cup.

Other newcomers include Esurance, and Symantec, maker of computer security products such as Norton Antivirus. Just what do these brands have in store for promotions? We'll just have to wait and see...

Want To Take Your Shot (First) At Large Scale Promotions?

We'll be the Chewbacca to your Han! Download our pricing guide to see how Hollywood Branded can be your right-hand Wookie, because when it comes to success never tell us the odds --- we have you covered.

Also check out these Star War blogs and infographics our team has created!