A Brand Marketing Expert Shares The History of Product Placement


A Look At Hollywood From The Inside

In this blog Hollywood Branded shares how Product Placement has - and has not - evolved over the years, and why this marketing practice is a hidden gem for so many brand categories.

In the 80s product placement agencies had a reputation as simply (often negatively) being ‘prop warehouses’ where product was available for the picking by productions.  Brands eager for exposure on screen are often referred today to having provided (a lot) of product to productions without requiring contracted guarantees.  There was certainly a ‘wild west’ feel to the practice, and a discount of considering these practitioners advertising professionals.  And some brands got burned when product didn’t show up on screen and shied away from the practice in ensuing years. 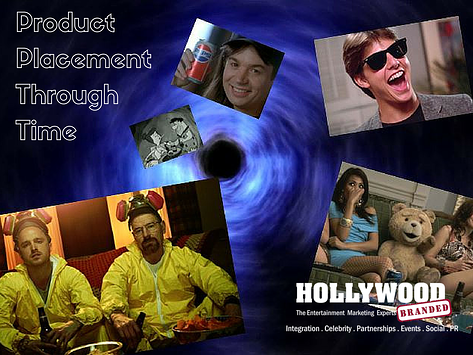 Through the ‘90s the days of agencies became true partners to their brand clients, brokering not only placement loan or larger trade outs (water for the cast and crew anyone?) as well as dollar deals in the 4 to 5 figure range. Neither productions nor TV ad networks had the clout at the time to command higher dollars, or a strategy in place to do so.

Creating promotional partnerships leveraging brand’s media dollars and retail point of sale space became a standard practice for some of the more strategic agencies. And both brands and productions benefited from the agency's assistance, as they still do today.  These partnerships are symbiotic – with both the brand and production partner benefiting.  The brand from the on screen usage and ability to rub elbow with celebrities – organically. The production as they offset costs whether that be their own department heads (props, sets, transportation, wardrobe) from having to do the outreach and source the products themselves, through actual savings of hard cash dollars, or through leveraging a brands’ media to reach more eyeballs with release date tagged in advertising and a higher box office resulting return.

In the first decade of this century, a massive change happened.  Media agencies suddenly realized the power of product placement and started launching their own specialty divisions of entertainment focused practices.  This was initially driven by the TV ad networks who wanted to get more ad dollars.  The new practices meant it became known as “brand integration”.  In exchange for paying a premium media rate for content, the brand would be written into the script.  This resulted in viewers often being hit over the head with brands inserted into content that wasn’t always an organic platform for messaging.  The agencies persisted however, still creating partnerships beneficial to both parties – just often at a much lower cost than that which their media agency counterparts offered. And these partnerships commanded a major price tag – often into the millions.

As the years have progressed, brand integration has been massaged and evolved, and the term ‘branded content’ now exists as an ultimate target for brand marketers to obtain.  Whether a co-produced production owned by both a production house and a brand, or simply a highly evolved partnership where the brand payment ensures themed scripting to support key marketing messaging, this has been considered by many as the height of the evolution of ‘placement.’  The end goal.

Yet it’s not.  Brands are evolving just as productions have – and technology has brought us the benefit of the digital landscape, where unique powerful content that creates chatter is the new marketing dream.

Productions need to start thinking outside of the box, and find ways to bring brands to the casting table and behind the scenes of the productions themselves.  To create stories that extend beyond the content.  To create content that shows what happens behind closed doors, and have the public be able to interact with it.  Strategies need to evolve to create content that can be shared or re-purposed for digital and social channels.  From offering filmed backstage brand experiences with the cast and crew  customized vignettes created and prettily packaged, which also benefit the production by bringing some extra PR and attention – and starting strong word of mouth marketing.  Create a hashtag for the film and brand and watch conversations soar.  Have the unit publicist help the brand get some on set attention.  Go beyond the media push, beyond the branded on screen chyrons, beyond hitting the consumer over the head with that hammer.

Provide sneak peak content that is distributed through brand partner’s digital channels. Engage the brand to helping sponsor stunts that gain both the brand and film publicity.   Productions need to figure out what they can offer that will provide the brand exposure through the content that makes sense and speaks to the same targeted consumer.  Brand marketers are looking for ways to differentiate and stand out from competitors.  Entertainment and celebrity still offers that option!

Networks, productions and studios need to start realizing that they are asking the brand for just as much as the brand is asking of them – and that this is a mutual beneficial relationship.  Some personal advice to producers & directors… offer the ease to the brand of creating a professional looking content piece during production for them… it makes it all the easier to get them to use it – even if through social media only.  It’s the big picture of eyeballs gained versus the costs of the time and editing.  Start thinking outside the square box.

These agencies teams glide from production set to production set and are in the ‘know’ of opportunities that happen at a moment’s notice due to a script rewrite or new scene addition.  They are powerful at leveraging relationships and offering benefits to production – which namely is the ability to make the lives of the production crew easier and save them time from having to source brands themselves. The network execs often don’t even know about deal potentials – it’s a separate world that both studios and networks have had a hard time bringing together.

An entertainment marketing agency connect the brand, celebrity and production.  And they are masterminds at getting things done without often spending too many dimes.  Whether a cohesive entertainment marketing strategy is built – with a brand being interwoven into dozens of scripts to become top of mind to viewers, a celebrity partnership that grows wings, or a single powerful partnership where the brand stands on screen just as a co-star, creating a phenomenal opportunity to build substantive marketing and advertising legs to extend the on screen exposure, these agencies are a brand marketer’s best friend. Yet to this day they are still discounted by many a media agency or network executive.  And even by brand marketers who are hesitant to try alternatives that don’t come with impression or minutes on screen guarantees.

Entertainment content is changing.  Brands can help with this evolution when productions are willing to work with them and look beyond the traditional media dollar.

Are you interested in integrating brand integration for your entertainment marketing mix, but simply don’t know where to start? There is so much more to product placement than you may think,  and it is important to be educated about the key tactics to best fit your brand. Download our Product Placement 101 Infographic today to start learning more!