Behind the Sign: At the 2014 Women in Film Crystal Lucy Awards

Wednesday evening at the Hyatt Regency Century City in Los Angeles, California, a grandiose ballroom of over 200 entertainment industry attendees were in awe, grounded, and inspired. Not just because of the décor; the entire room was fittingly gold, glitzy and glamorous (the PassionRoses arrangements were to die for!), and not just because of the incredible food or the delicious, adorable trays of desserts (we won’t mention how many times we went back for more).

An Evening Of Honorable Glamour

The source of inspiration among a room of Hollywood’s most influential - women and men - were the five honorees who took the podium to accept their prestigious awards.

But let’s rewind and take you through our night.

Upon arriving at the posh and modern Hyatt Regency at the Avenue of Stars, we proceeded to cocktail hour and the silent auction. After enjoying a cocktail and checking out the prizes up for auction, soon enough the ceremony was about to begin. On the way to the ballroom, talent was still arriving on the red carpet. Rose Byrne looked lovely in her Max Mara ensemble, as the recipient of the Women in Film Max Mara “Face of the Future” Award. We also managed to catch Ms. Cate Blanchett, who is somehow even more poised and graceful and beautiful in person than she appears on screen. That woman really is a goddess! 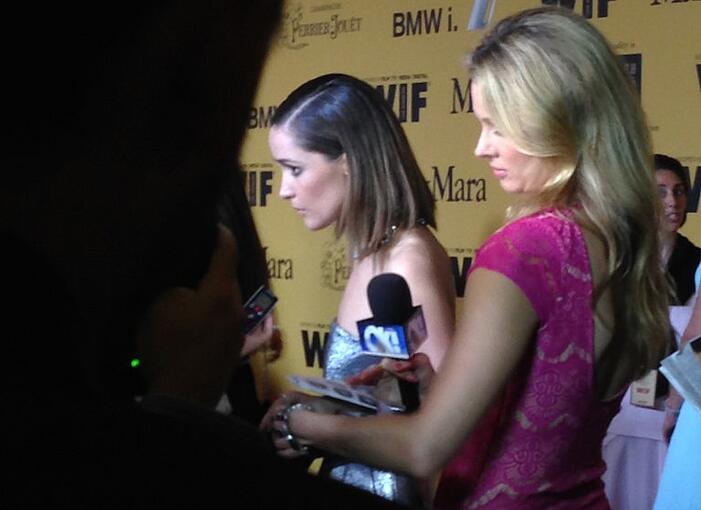 It was time to go to the dining area and take our seats. Upon entering the ballroom, my jaw literally dropped – the room was absolutely stunning. After taking our seats, we took in the lavish atmosphere as we enjoyed the first dish. Then, the music began as the Heiress of Music Royalty aka daughter of Diana Ross, Tracee Ellis Ross, took to the podium to open the show as host. “Last year, Women in Film turned 40. So that makes them 34 on IMDB.” Needless to say, she was hilarious.

And The Winners Are...

Rose Byrne was the first to accept her award, introduced by Max Mara CEO Nicola Maramotti. The actress, who starred in Neighbors, Damages, Bridesmaids, and is currently filming Spy alongside comedienne Melissa McCarthy, emphasized the significant role of women in film and one that should not be underestimated: “It’s imperative we realize women are consumers just as much men, and have our stories told and audiences embraced.”

Cate Blanchett, we were told, was here in Los Angeles for just a 24-hour turn around, having just flown in from Australia. And though she admitted that she hadn’t prepared her speech until an hour prior to the show, her acceptance of The Crystal Award was hilarious, genuine, witty, and above all, inspiring – very much reflective of who she is as an artist and person. She encouraged women to take risks, as the most risk-taking, scary decisions of her career—though at times led to “f*$#-ups,” in her words—reaped the greatest rewards.

Eva Longoria received The Norma Zarky Humanitarian Award. She is known internationally as an actress and celebrity, but not many understand the time and effort that she dedicates to the many great causes she believes in off-screen. From politics to charity, she is extremely involved, and seeing just a small glimpse of it via the highlight clip was very eye-opening. She is truly deserving of this award. 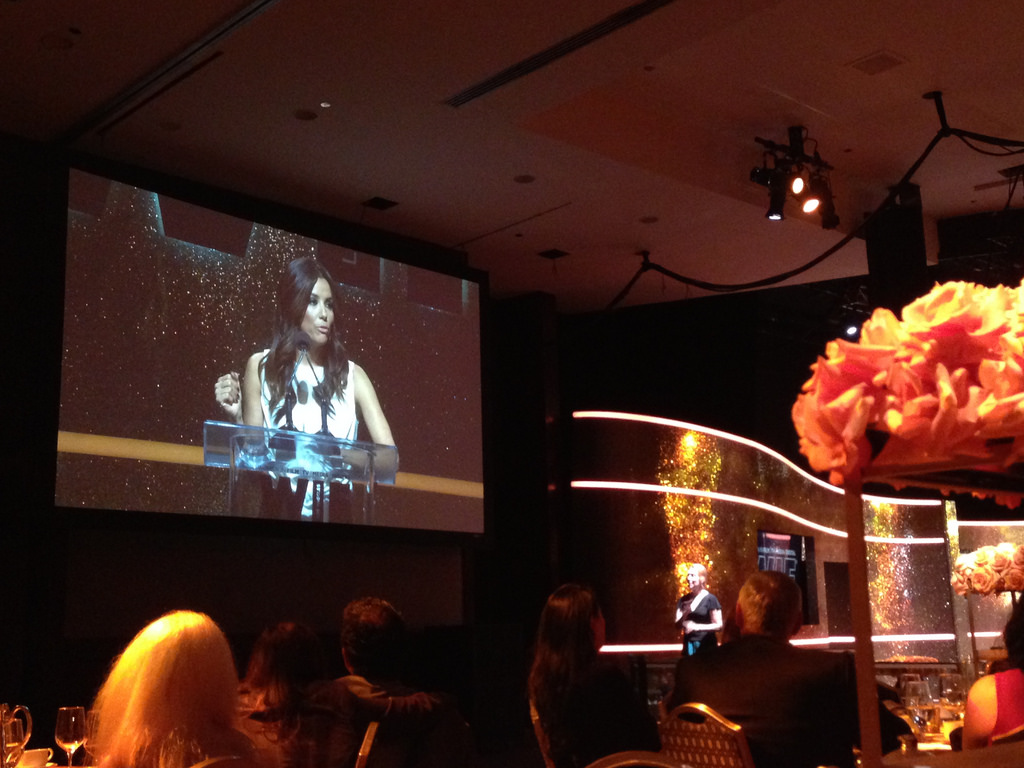 Next, Frozen star Kristen Bell introduced the film’s director and honoree of the Dorothy Arzner Directors Award, Jennifer Lee. She has made such an immense impact with Frozen, being the number one animated film of all time, and the fifth highest-grossing film ever. It is evident that the film has captivated the world, meaning that the female-focused storyline and protagonists are reaching girls and inspiring courage, strength and self-confidence at such a young age. “Female characters, if done with authenticity, can get a whole world to come see them,” she said. 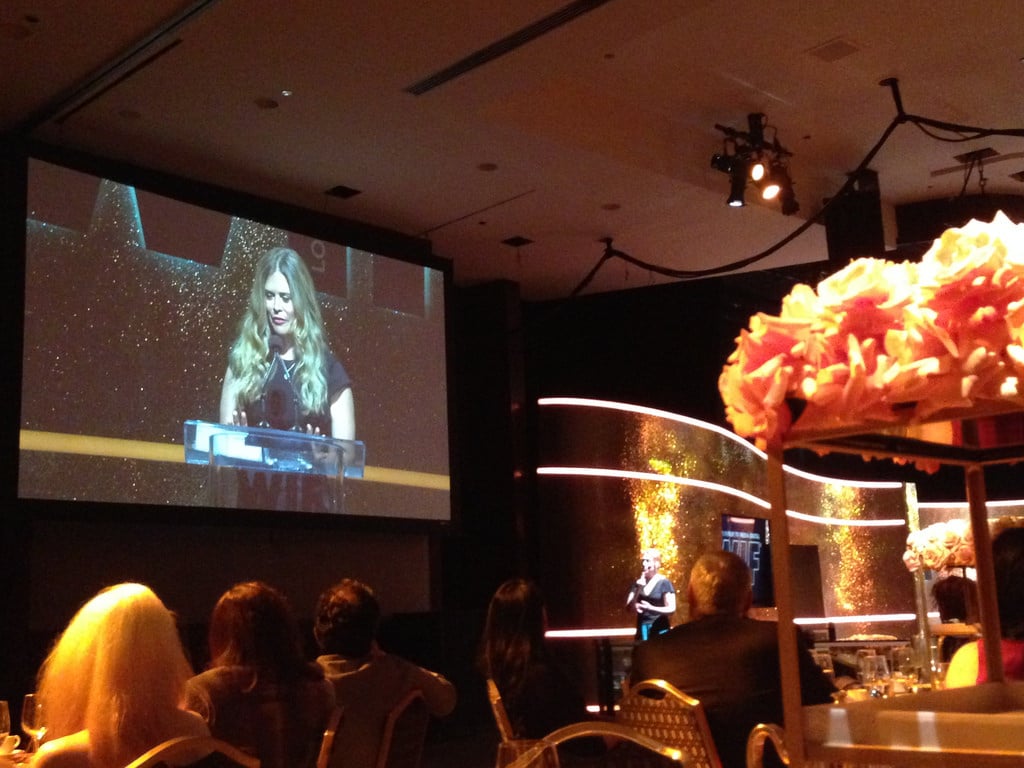 Last, but certainly not least, Kerry Washington accepted The Lucy Award for her exceptional work in television. After thanking her presenter, Scandal creator Shonda Rimes, Washington “told on” herself. She admitted a time in her life where she declined a great opportunity because she “wasn’t ready,” commenting that few men have turned down the same. “When we step up for ourselves, we create opportunity, whether it’s because we inspire other people or we employ other people,” she said.

Not only were the honorees' accomplishments highlighted, but so were the Women in Film educational and philanthropic programs. These initiatives were showcased by numerous speakers and clips, and it was great to see all this organization and its donors have done to ensure that women get a voice and a say in the storytelling that takes place in Hollywood.

We left the event with not just content stomachs and a great gift bag, but great hope for the advancement of women thanks to a room of 200+ individuals who care deeply about it, plus the words and actions of five amazing honorees who are continuing to help carve the path.

Check out the rest of our pictures from the night here.

Go behind the sign with Hollywood Branded! Check out the insider view of more fabulous events such as the AFI Fest or the AFM Wrap Party.