Everyone Needs Their Fix

A staggering 83% of adults in America wake up with coffee, with the current percentage of American coffee consumption at its highest level since 2012 according to Reuters.

There’s no arguing that coffee is a strong market with many major brands competing to be America’s go-to. For this reason, it’s no surprise that in recent years coffee brands have had some pretty strong integrations in some of America’s favorite shows. Because after all, art mimics life.  In this blog, Hollywood Branded talks about some of our favorite television coffee integrations, including of course, one of our own clients. 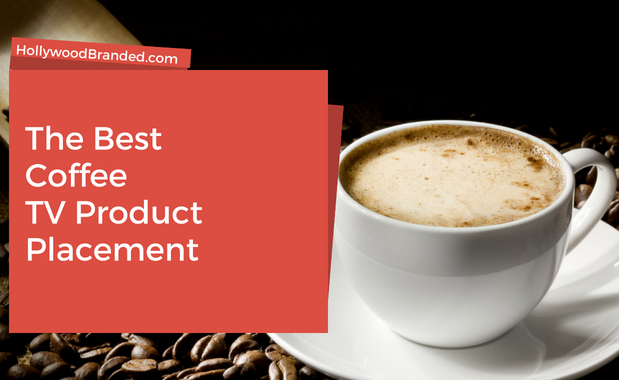 Keurig and the popular morning show have had a partnership for the past couple of years. As most viewers of the show are watching it over their own cup of coffee, it’s a smart time for the brand to be capturing their attention.

In addition to doing segments on taste testing (the brand is also known for their own variety of coffee known as Green Mountain Coffee) and audience giveaways, the brand’s most impactful segment on the show has to be from 2017 when they completely redid the production’s break room, remodeling the formerly drab space and decking it out in cool furniture, new flooring, and of course a ton of Keurig branding. This space has since seen a couple more Keurig segments. It’s the gift that keeps on giving! 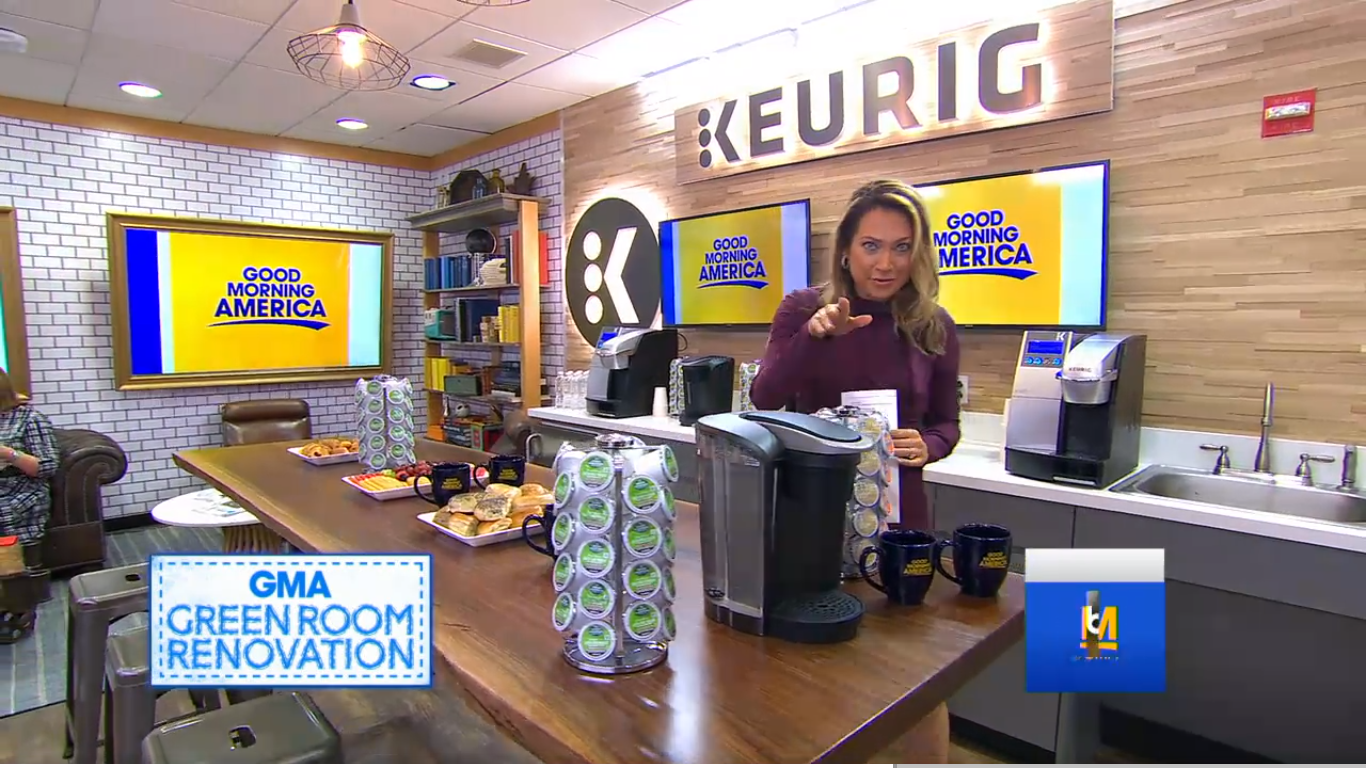 Here's another Keurig segment where audience members did a taste test of the brand's own flavor of coffee, Green Mountain.

Starbucks was one of the main sponsors of FOX’s hit singing competition, The Voice. In addition to having branded cups no farther away than two feet from the celebrity hosts at all times, Starbucks took the partnership even further with charitable donations made to female empowerment group, Girls Inc., a trip taken by the contestants to a local Starbucks where they gave patrons tickets to a taping, and $100 gift card giveaways.

Gwen Stefani and Blake Shelton striking a fun pose with their Starbucks cups. 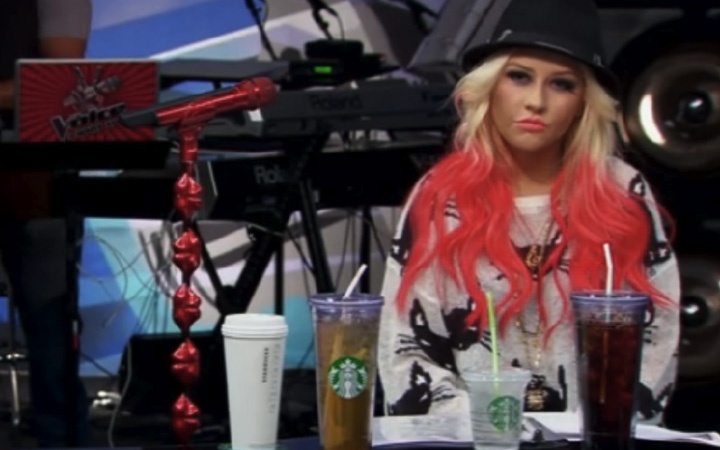 Christina Aguilara surrounded by Starbucks while helping one of her team members rehearse.

This is a partnership that still lives on today. It includes on-air, digital, and social integrations on NBC’s high profile talent competition. It truly is a multi-levelled activation – there’s a Dunkin Lounge where the talent hangs out during tapings and of course the famous Dunkin Save, which allows viewers to save their favorite contestant from elimination… talk about Dunkin coming in to save the day!

Really hoping to capitalize on today’s millennial viewers, this season’s integration added a Facebook Live series and cobranded ads that invite viewers to access exclusive content only seen on Snapchat. And to bring this into retail, during the season’s run, Dunkin Donuts offers fans the opportunity to buy the branded judges mugs for themselves. Talk about 360 degrees!

Host Tyra Banks getting the contestants pumped up in the Dunkin' Lounge backstage.

COMEDIANS IN CARS GETTING COFFEE – LAVAZZA

Jerry Seinfield’s Comedians in Cars Getting Coffee not only got a network revamp, leaving SONY’s Crackle for Netflix, but it got a coffee revamp as well, ending its short stint with Starbucks in favor of Lavazza, Italy’s supreme coffee.

Given the show’s namesake, it’s no surprise that coffee plays a huge role in the show. Each episode Jerry picks up a fellow comedian, and they drive a cool car to local coffee shop where the two enjoy a cup of coffee and talk comedic shop.

This season that conversation was sponsored by Lavazza. With no US Lavazza locations, the season’s coffee drinking at café’s that weren’t necessarily brewing the Italian caffeine. To counteract that, production would sometimes place Lavazza branded items on the table while the comedians talked. However, the most common form of exposure came in the form of general coffee preparation b-roll during the episodes. The most impactful co-branded piece, though, has got to be this ad spot featuring Lavazza with some of the best coffee moments from the season.

Jerry Seinfield and Kate McKinnon enjoying coffee with some ever so slight Lavazza branding right in the middle of the two. 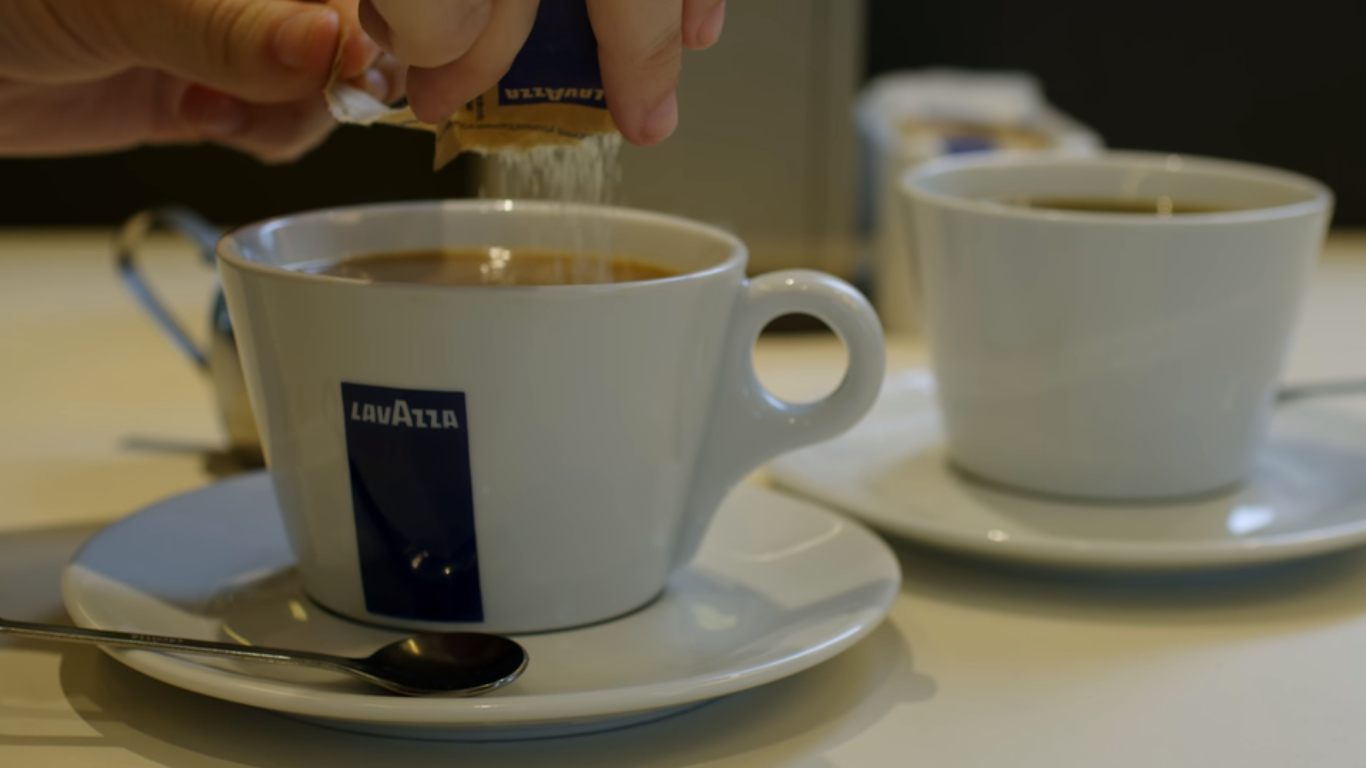 Here's an example of one of the b-roll images that she show runs a couple of times per episode.

Here's Netflix and Lavazza's co-branded piece, touting the release of the latest season.

The only coffee placement in a scripted series on our list happened in Season 3 of Showtime’s hit dramedy, Shameless. And of course, this has to be our favorite because for full transparency... our agency did it!

But one of the reasons we really love it is... it's the gift that keeps on giving. With reality series, while can get mega eyeballs, once they've run, they are pretty much done.  With scripted content, the show is viewed for years to come - all over the world.

The caffeine chain, Coffee Beanery, received great exposure over the course of the season as a place of employment for one of the main characters, Jimmy, played by Justin Chatwin. The brand had a full store buildout including signage, apparel for the employees, cups, menu boards, etc. As a crucial plotline in the story, regardless of how organic the placement was, it couldn’t be missed!

And even as late as the current season, mugs and coffee tumblers are still scattered around the Gallagher's house - even though Jimmy has seemingly disappeared forever. 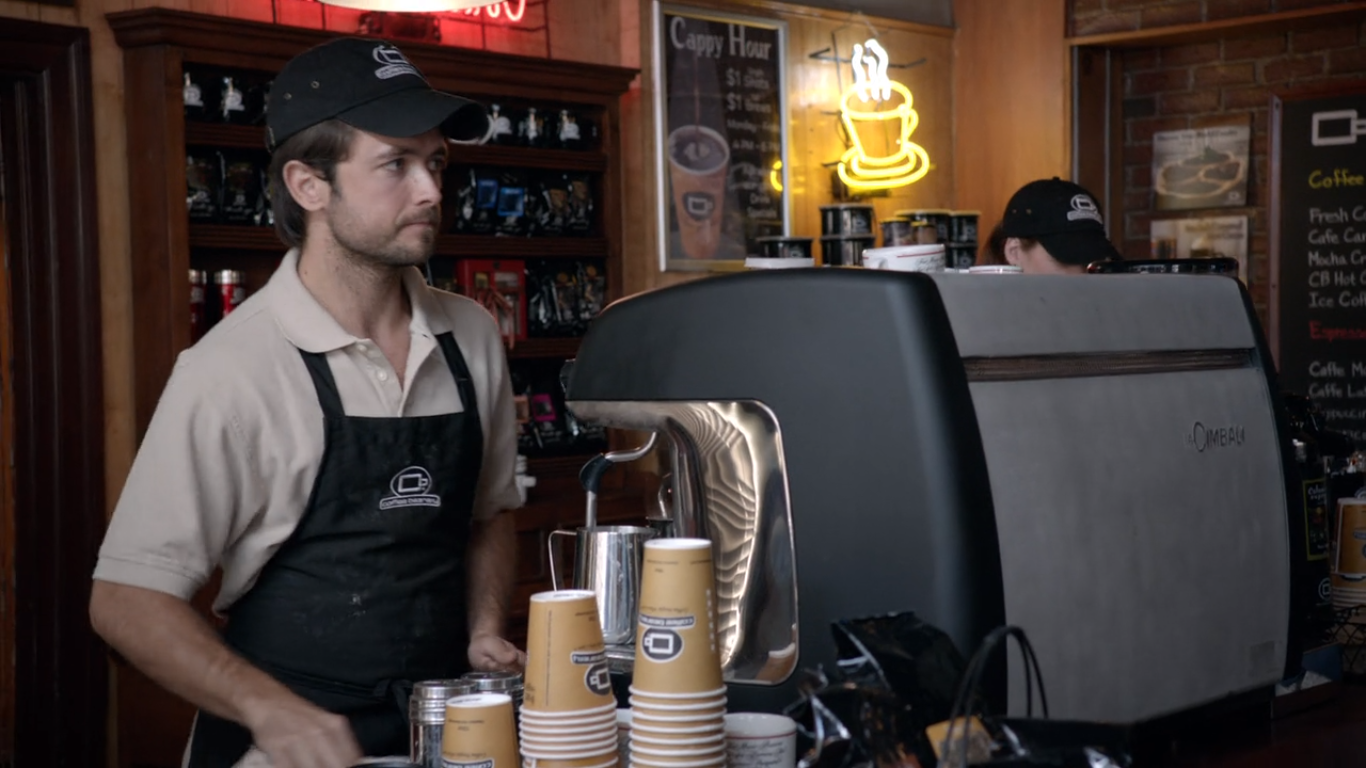 Here's the character Jimmy decked out in his Coffee Beanery apparel. 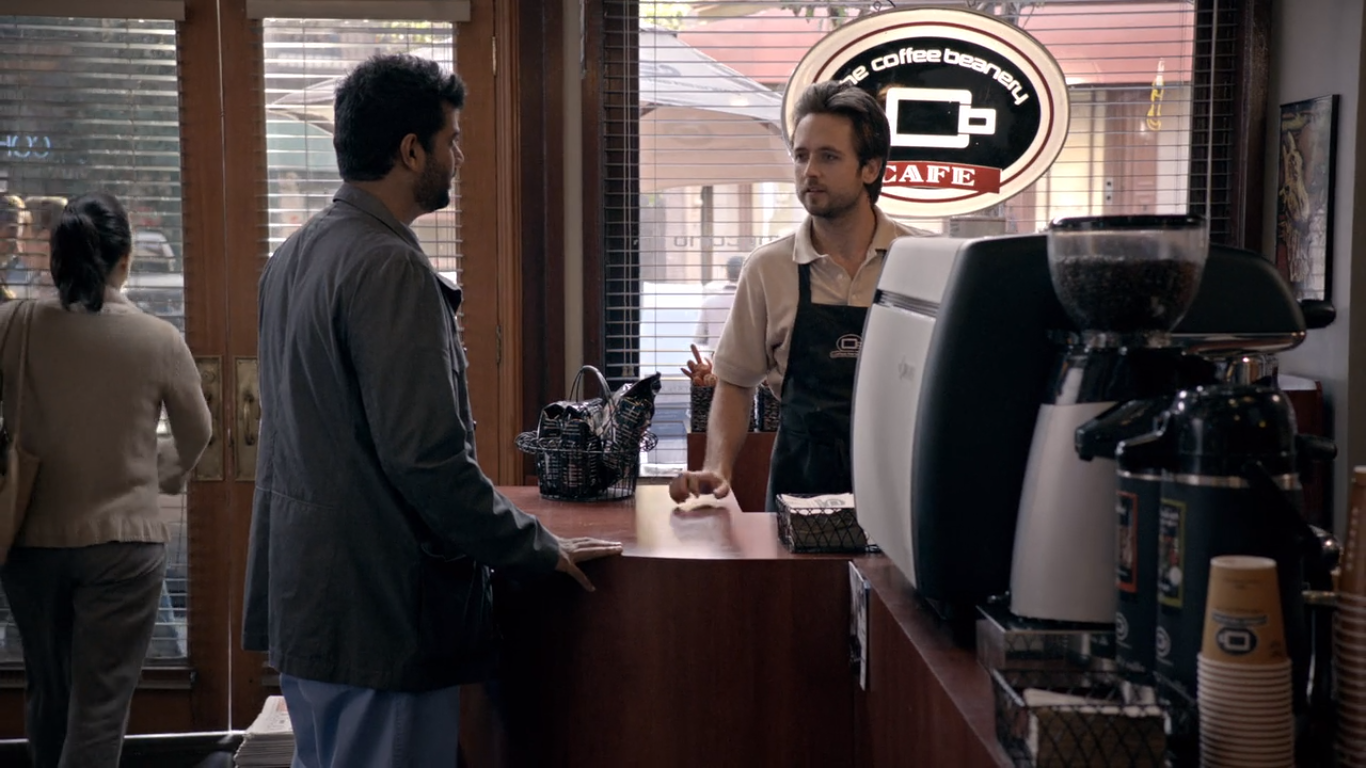 Here you can see a bit more of the set decoration and signage. Coffee Beanery provided everything from the window signage to the cups to the branded air pots to dispense the coffee.

Considering the undeniable market coffee has on the world, there will no doubt be additions to this list in no time. Coffee is a brand that is seamlessly weaved into reality and scripted content. It’s the world’s single most popular morning pastime. We’ll only be seeing more of these to come.

Interested in having your brand interwoven into a script?  To learn more about making product placement work for your brand, read our blog on 3 Reasons Why Productions Use Product Placement.  Then check out these blogs are team has written to get a better understanding for the opportunities out there!

And be sure to read our e-Book on product placement and brand promotional partnerships!