Brand Influencer Marketing In The UK

Throughout the world, Influencer Marketing has become increasingly popular in the past few years with many brands dedicating a portion of their marketing budgets towards the increasingly effective marketing practice. However, influencers did not grow at the same pace worldwide, with influencers slowly sprouting in popularity.

The United Kingdom has recently seen the trend of influencers become popular just in the past year or so. In this blog, Hollywood Branded takes a look at brand influencer marketing in the UK and what marks a good campaign.

Similar to social media in the United States, Instagram is certainly the home of many social influencers in the UK, though Youtubers are also a great source for brand partnerships in Britain.

One of the most well-known influencers in the UK, and one who has certainly shaped the way in which influencers work in the UK is 27 year old YouTuber Zoe Sugg, better known as Zoella. Zoe started her social media life as a YouTuber and quickly leveraged the platform to gain a massive following, currently boasting over 12 million subscribers.

Zoella has effectively used her relatability to her audience to make high monetary gain. As a result, she is particularly attractive to brands and has participated in many influencer marketing campaigns. Zoella has had major success promoting products with books, including her own “Girl Online’ which quickly became a bestseller, proving particularly popular within her fan base.

One of Zoella's most successful brand partnerships came in 2016 she partnered with British book retailer WHS Smith to launch a book club where her favorite picks were featured, all of which were young adult pieces, designed to appeal to her young fan base, which are mostly teenagers. Central to this partnership was her YouTube channel where she recommended some of her favorite books. The videos were titled "My Book Club Picks" and noted that each was an "advertorial for WHSmith", with the first gaining 1.4 million views and the second just under 1 million. The sales of each of the books benefited greatly from the partnership and it was deemed a major success for WHSmith.

The partnership between WHSmith and Zoella may have appeared unlikely at first - but it certainly makes sense. WHSmith saw Zoella's large following of teenage girls as a key demographic for young adult novels and determined they would see Zoella's recommendation of such books as authentic.

The books chosen for the campaign were such an ideal fit for Sugg's audience that WHSmith saw a large increase in sales for the books showcased, proving that the campaign was a perfect match. In fact, the day after the first video Zoella released for the campaign the sales for each book soared with increases from over 1,800% all the way up to 11,000%.

Sugg's enthusiastic personality and relatability to her audience helped drive sales of the books and ensured some level of success by reaching an appropriate audience. This influencer marketing campaign was particularly successful in increasing brand awareness and getting those younger readers to visit book stores.

The partnership can last for quite some time with new young adult titles released regularly each year. In fact, WHSmith expanded on the campaign in 2017 with the campaign now featuring some of Zoella's "friends", authors Jennifer Niven, Juno Dawson, Amy Alward and Chris Russel, which signals the return of the book club for years to come.

Other Examples Of Influencer Marketing In The UK: KSI

As a result, it is not at all surprising that some of the most popular YouTubers vlog about video games. With over 17 million subscribers, KSI is one of the most popular British influencers and due to this, is the first choice for many brands. While he started off primarily dealing with video games, he has since broadened his reach to include a wide variety of topics, one of the key drivers for his large follower base.

However, KSI has suffered his own form of controversy during an XBox One launch at the 2012 Eurogamer Expo where his behavior towards women quickly resulted in sexual assault allegations. This later resulted in him being banned from future Eurogamer events and Microsoft cutting all ties with the influencer.  And likely quite a few brand deals along the way.

In the years since, KSI managed to clean up his image which has led to brands willing to re-engage, and the creation of many more successful campaigns including one in 2015 with KFC.  With this campaign, KSI celebrated KFC's 50th year of business after proclaiming his love for the fast food giant in a video where he imagined a life without KFC. This guaranteed KFC a massive number of viewers that watched, and would likely have a higher engagement level with KFC food purchases after viewing. The video gained almost 3 million views and certainly gave KFC the audience they desired for their 50 Years of KFC contest. 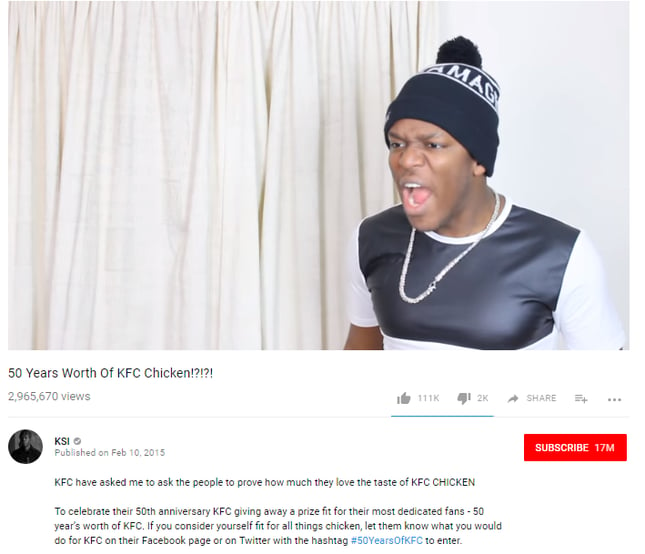 With this video having almost 3 million views alone just from YouTube replays... it definitely was a success.

2015 also saw KSI team up with ESPN for a campaign to launch their coverage of the EURO 2016 championship. The campaign included both KSI and two other influencers, Manny and Calfreezy. The three influencers teamed up to create content for the broadcaster from the ESPN Inn where they recorded soccer challenges, skits and interviews. The exact success of the campaign is difficult to measure as ESPN did not reveal the viewing figures on their website. However, one of Manny's videos created for the campaign gained over 300,000 views. While this is a modest number compared to other videos featuring KSI it certainly was successful for ESPN considering it has a smaller more niche viewership in the UK. And was spot-on for the media outlet.

Ready For Influencer Marketing For Your Brand?

While these were just a few examples of how influencer marketing works in the UK, there are many more examples out there and lots of opportunities for brands to reach a British audience.

There are a lot of steps to go through to make sure your influencer marketing campaign is going to follow local government rules and regulations, like the FTC sets up for US influencer partnerships, which must include #ad or #spon.

Read more about how to safeguard your influencer marketing campaigns:

And also be sure to check out our guide for influencer marketing partnerships for brands below!

Adam is currently living his LA dream, having come to the States after getting his Masters in Film and Television Studies from the Dublin City University in Ireland. Adam enjoys all things entertainment – especially superheroes franchises or science fiction movies, which you will often find him watching in his spare time. That, or Adam Sandler movies.