How an Anthropomorphic Simulation Game Can Foster Brand Visibility

Strategic branding within video games has become increasingly relevant, as players turn to virtual worlds in light of the lockdown on our physical one. Brands now have more power in using video games to promote exposure and visibility. Animal Crossing: New Horizons has become the “it” game of the year, and its release could not have come at a better time for players and brands alike.

In the midst of quarantine, there is seemingly nothing better than escaping to virtual worlds. Nintendo capitalized off this universal whim of ours with its release of the newest Animal Crossing installment in March of this year. In this blog, Hollywood Branded examines the ways which brands can capitalize off of games like Animal Crossing through brand integration and product placement to reach their audiences in unprecedented ways. 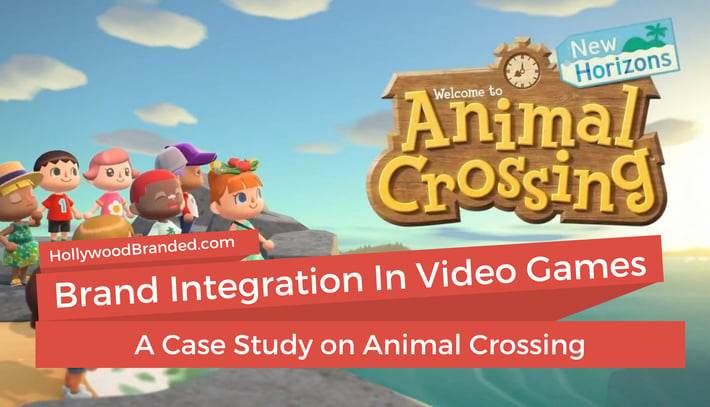 Animal Crossing: New Horizons was released exclusively for the Nintendo Switch on March 20th, 2020. The fifth title in the Animal Crossing video game series has broken records as the highest-selling digital game during the launch’s first month, and currently stands as the 3rd best selling Nintendo game of all time. Selling over 13 million copies to date (Statista), the game has reached millions of players. 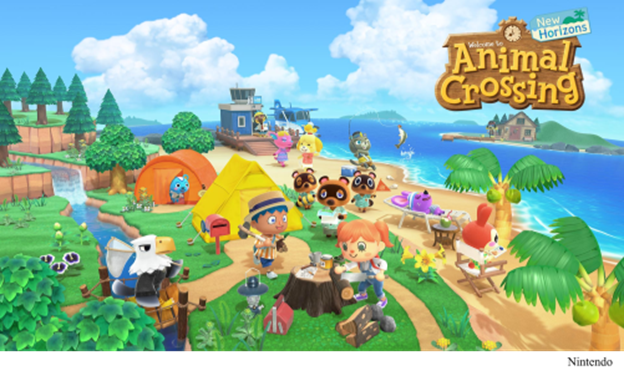 In the game, players land on a deserted island after purchasing a getaway package. Their mission is to complete various odd tasks to transform the once-barren island into a bustling paradise filled with animal neighbors. The game has received wide acclaim for its slow-paced take on living. It’s no surprise that the game has created a low-stake haven for influencers and brands to bolster their visibility.

How Brand Visibility Has Shifted During COVID-19

COVID-19 has forced brands to think outside-of-the box about marketing their products and maintaining their image. Without physical visibility, it’s crucial to turn to strategies that allow consumers and brands to virtually interact with more dimension than simple digital marketing. Games that are centered on creative expression and social interaction give brands the freedom to expose virtual strangers with their branding. In addition to the Animal Crossing series, games like The Sims franchise, Club Penguin, and Minecraft are able to accomplish this. Animal Crossing: New Horizons (ACNH) is one example of a great medium for many brands to cast a virtual identity within.

The plus of virtual in-game marketing is its uninhibited and informal approach. There is no additional cost for a brand to take advantage of in-game content, like creating customized clothing or building a virtual gallery. Anyone is able to freely create content within these games to share with the general public on a more intimate, down-to-earth level.

One of the game’s features is the ability to create custom designs with the in-game design editor. Players are able to upload their pieces and download those that are uploaded by others. Artistic freedom in designing clothing style, ranging from hats, dresses, and sweaters, creates infinite possibilities for brands to take advantage of.

Players have recreated luxury clothing items from brands like Bape, Supreme, and Gucci, and certain brands have even translated their pre-existing collections into in-game download codes. The Instagram account @animalcrossingfashionarchive boasts a fashion collective that partners with real designer brands to create virtual couture. Kara Chung, creator of the account, describes this visibility to Vogue as “an experience for other people because it’s all community-based.” Marc Jacobs even recreated their pastel pieces from the The Marc Jacobs spring collection of 2019, posting the game codes on their Instagram for anyone to download freely. 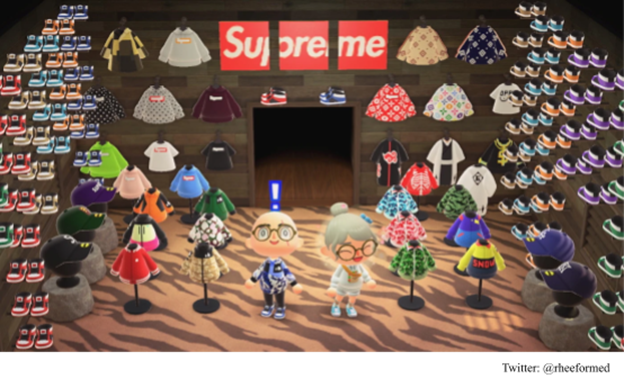 Likewise, even non-fashion brands have been able to appropriately market themselves through branded merchandise. Twitter Gaming released a set of tees designed with the classic Twitter logo and retweet symbols, egging players to share screenshots of their ACNH character repping the social media giant.

Design interfaces gives brands the opportunity to be more accessible and engaging to all players. Through free custom content, players are encouraged to take advantage of the chance to express themselves with brands that they might not normally have access to. While doing so, they’re likely to share #fitcheck screenshots of their character on social media, furthering brand exposure.

In addition to clothing, players have the ability to completely customize their homes with decor and wallpapers. Similar to the custom clothing codes, players can also download design/pattern QR codes that can be worn or hung up as paintings. The opportunities here are endless. With the fan-made Animal Crossing Pattern Tool, one can convert any image into a digital design to use in the game.

Some art institutions have fully utilized some of these features to promote themselves through virtual galleries. The Getty Museum has created an Animal Crossing Art Generator, a database of renowned art pieces and their corresponding QR codes. The Metropolitan Museum of Art has also hopped on the bandwagon with their online collection that has added a ACNH widget when you click “share” on any of the pieces. Once again, these codes are open-access, and they function extraordinarily well in promoting these institutions’ missions to provide artistic solace during these times.

ACNH has even fostered the creation of new entertainment, in the form of late-night shows and museum tours. This content is able to promote the image of pre-existing brands and give a platform for new ones to emerge.

Inspired by the game’s customizing freedom, Gary Whitta, writer of Rogue One: A Star Wars Story, created his own late-night talk show complete with celebrity guests and musical sets. The Animal Talking “set” is furnished with various musical instruments, the classic host desk, and guest couch. The Verge described Animal Talking as “achieving what hosts like Kimmel and Colbert can’t.” 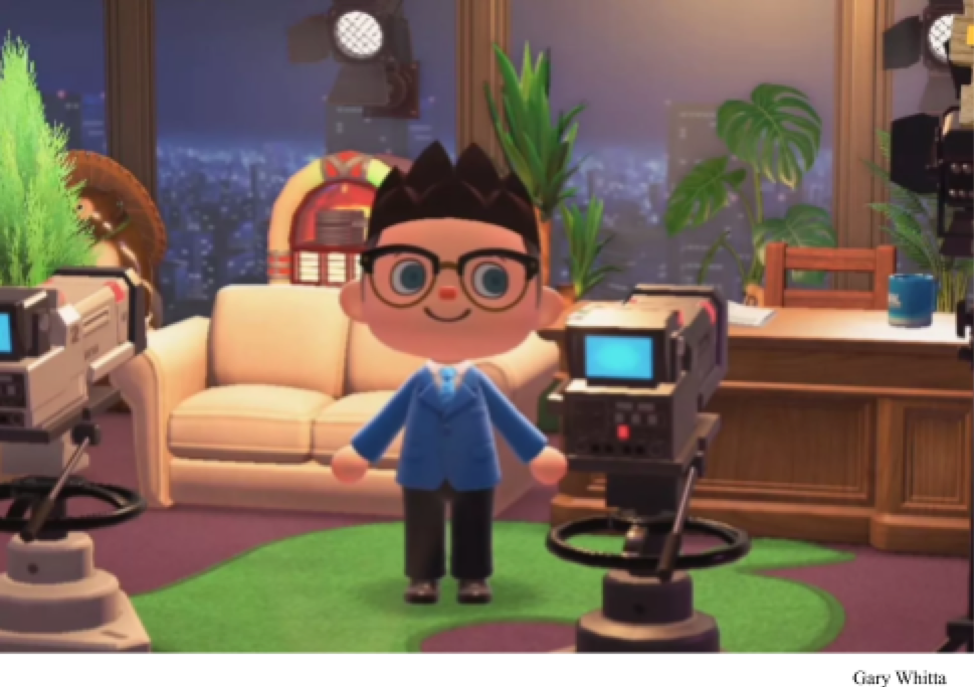 In April, the Monterey Bay Aquarium and the Field Museum partnered up for an in-depth tour of the game’s museum, live-streamed on Twitch. One of the game features is collecting various fauna, including fish, insects, and fossils, that are housed in the museum. The livestream walked players through the museum halls, with more in-depth descriptions on each creature.

Creating unique content within virtual confines is a necessity to make the most out of branding during these times. These are only three examples of how brands/organizations have interacted with consumers on a three-dimensional level, but the possibilities are endless! There are infinite arrangements of décor, characters, and actions, along with a touch of video editing, to effectively convey experiences that your brand may not be able to physically provide during these times. Creatively manipulating in-game homes and buildings to provide entertaining content is a fantastic alternative to physical publicity.

Video games like Animal Crossing provide a multidimensional platform for brands and consumers to interact with each other, a feature that distinguishes itself from film and television branding. Games allow users and brands to insert themselves into simulated worlds and activities that can generate virtual social buzz. What you should know is that gaming has reached a new level of popularity during quarantine. The average customer turns to a virtual world to replace in-person leisure activities that are inaccessible right now.

Whether it is using digital design tools to create in-game branding or socially interacting with consumers on the gaming platform, brands can reach their target audiences in meaningful ways.  Consequently, there is vast potential for brands to publicize themselves in alternate realities that are able to reach current consumer bases, along with new audiences. In times like these, this has become ever so important.

Want to learn more about how to get product placement to start being a sales driver for your brand? Then check out our video "What Is Product Placement" below to learn the must-have knowledge of how to get started.