Brand Partnerships for Star Wars: The Rise of Skywalker


An Astronomical Opportunity For Product Placement

The final battle between the Resistance and the First Order hasn't even started, but the blitz of brand promotions is in full swing. Lucasfilm released the list of brands partnering with the studio for Star Wars: The Rise of Skywalker in early October with a barrage of new names that includes Bose, Porsche, and United Airlines - to name a few.

New brands mean opportunities for fresh product placement integrations that fans have yet to see. In this blog, Hollywood Branded takes a look at the brands that have partnered with Star Wars: The Rise of Skywalker, and how they plan to prepare audiences to be transported to a galaxy far, far, away…

The Jump To Hyperspace

Even though you won’t see robots driving a Porsche across the dessert landscapes of Jakku or a United Airlines plane outrunning imperial starships alongside the Millennium Falcon, these two brands have made it clear that they want to be associated with the Star Wars galaxy. Both Porsche and United Airlines were part of the list announced by Lucasfilm of companies involved with the marketing campaign of The Rise of Skywalker.

Porsche called upon the idea of fandoms with their announcement, comparing fans of Star Wars with fans of Porsche in their passion, intensity, and devotion to the brand. In addition, Porsche is using the release of the highly anticipated film to promote the launch of their latest car model, the fully electric Porsche Taycan. The partnership allows for significant exposure across the globe in a mutually beneficial relationship with the goal of generating hype leading up to both brand’s launches. While this is the first time Porsche is collaborating with Star Wars, it is not the first time that Star Wars has collaborated with a carmaker. For the releases of Star Wars: The Last Jedi, Rogue One: A Star Wars Story, and Solo: A Star Wars Story, Lucasfilm collaborated with Nissan to a greater degree than they have with Porsche, going as far as to design and create custom Star Wars character themed cars for the brand. 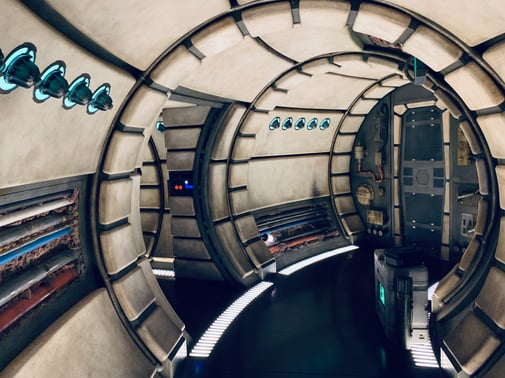 United Airlines partnership with Star Wars involves offering “experiential activations and fabulous first of its kind programming for fans across the galaxy to enjoy” and the debut of a unique aircraft with a paint job designed specifically to mimic something out of the world of Star Wars. While it may not be able to make the Kessel Run in less than 12 Parsecs, this collaboration is sure to have Star Wars fans flocking to the airline in an attempt to board the dazzling plane this November. Unfortunately for them, the plane will not be assigned a specific route, and as a result could be anyone of the many planes docking into over 358 airports across five continents.

But as Han Solo once said, “Never tell me the odds!”

These Aren't The Droids You're Looking For

The otherworldly nature of Star Wars allows for the involvement of aliens, mystical powers, and of course, advanced technology. From the Death Star to lightsabers, Star Wars does not shy away from the featuring the impossible machineries of tomorrow. So, it makes sense that Lucasfilm would partner The Rise of Skywalker with three electronic companies: Samsung Mobile, Bose, and General Electric Appliances (GEA).

When Star Wars was first released in 1977, the world gawked at the technology the characters used on screen. Although our advancements have not yet reached the same level as a space station the size of a moon, many of the machineries and appliances we have today would make anyone feel like a Jedi in 1977. It is with this that GEA decided to center their promotional campaign. GEA’s campaign heavily feature smart home technology that mirrors the mechanisms of the Star Wars universe. Moreover, GEA also offers two different sets of the same appliances, one with a darker finish (harnessing the dark side of the force), and one with a lighter finish (empowering the light side of the force) allowing the customer to ‘choose’ their path.

Utilizing Star Wars’ history of impeccable sound mixing (for which the original film won an academy award!), Bose will be offering their customers immersive experiences through their wide selection of headphones coupled with the official Star Wars app. The brand boasts how some of their headphones will come attached “with motion sensors embedded inside that can detect a user’s head orientation and body movement” to deliver a realistic, harmonious, auditory environment.

Finally, Samsung has announced that its partnership with The Rise of Skywalker, but the details are yet to be announced as of October 16th. However, they have teased that the collaboration will “showcase a connected world powered by Galaxy.” Knowing that their signature phone is called the Samsung Galaxy, it makes perfect sense that they would try to work with arguably the most famous fictional galaxy in human history! 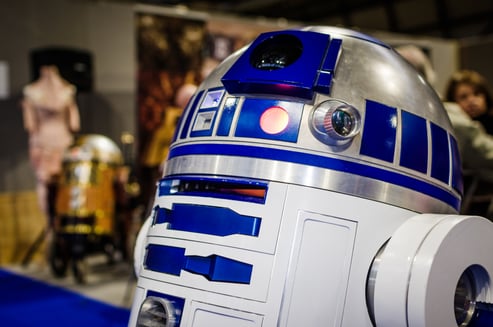 For anyone who has seen The Last Jedi, the most memorable scene (for better or for worse) must have been watching Luke Skywalker, legendary Jedi master drinking green milk personally collected from the udder of a sea alien… so it’s probably safe to say that the food they eat in a galaxy far, far, away isn’t exactly the same as in our world.

And as you may have guessed, that’s not to say Lucasfilm can’t form partnerships with food brands to help promote the latest film.

Returning to help spearhead the marketing campaign is General Mills, who have already collaborated with Lucasfilm on several Star Wars films. Their campaign for this film offers two intriguing selling points for customers. The first being the game like structure that involves having customers open General Mills cereal boxes to collect unique tattoos that can be scanned in the official Star Wars app. The second selling point involves a charity aspect of the game as General Mills claims that they will donate 10 cents for every 6 tattoos scanned. The brilliance of this partnership goes beyond these two aspects as there are not a lot of other franchises that will have the same buying influence on customers as Star Wars, and not a lot of brands have the same presences in general stores as General Mills.

Similarly, to General Mills, Dannon also has a very big presence in stores being the number one yogurt manufacturer in the United States. By the time December comes around, there will have been months of Dannon yogurt cases plastered with Star Wars images to help promote the film. In this way, Lucasfilm will have reached out to all the children, regardless of whether or not they like Star Wars, who have held a Dannon yogurt case. Considering how big they are, that’s a lot of Star Wars themed yogurt cases.

Then of course we have the main player in the fast food industry, McDonald’s. McDonald’s is no stranger to the brand partnership game considering that they release new toys based on franchises extremely often. Furthermore, McDonald’s operates in over 100 countries serving more than 68 million people worldwide everyday – that’s a lot of exposure, and Lucasfilm knows this. In establishing this partnership, McDonald’s benefits from the allure that Star Wars has, especially in the toy industry, driving new and returning customers to the restaurant chain for the sole purpose of appeasing their Star Wars thirst. On the other hand, the customers who regularly visit McDonald’s but might not be massive fans of Star Wars, might become swayed over the constant exposure of Stormtroopers and Rebels.

The Brand Will Be With You. Always.

It’s no secret that any Star Wars film released in theatres are generally considered as a massive cinematic event. There aren’t many franchises that can compare to the leverage Lucasfilm has with their films. With The Rise of Skywalker being considered the final film of the decades long saga that began the Star Wars phenomena, it’s probably safe to say that a lot of people will be going to watch the film when it releases. Yet Lucasfilm knows the value a good marketing campaign can have regardless of the film’s anticipation, and rather than spending a massive amount spearheading a single marketing campaign by themselves, they formed strategic partnerships with brands who already have the kind of exposure Lucasfilm wants.

As December closes in, you can be sure that you will be seeing more and more Star Wars content everywhere you look as the brands ramp up their campaigns to the maximum. To learn more about Star Wars and branding, take a look at some of these other blogs.

Want to learn more about strategic partnerships? Want to take a dive into the world of co-promotion and product placement? Check out the link below!