Change Your Apartment. Change The World

In the last year or so, a hotel brand has managed to harness the power of celebrity endorsements to bring to life an advertising campaign that is relateable to their targeted consumer.  And it's well done branded content that has allowed both Hilton's booking app and their mid level hotel chain, Hilton Garden Inn to stand out from competitors.

With six commercials crafted just in the last year alone, storylines have ranged from saving time, finding the right hotel, and comparing vacation options. In this blog, Hollywood Branded shares a look into how Hilton and their celebrity endorser co-star Judy Greer has created an ad campaign out of branded content that appeals to consumers. 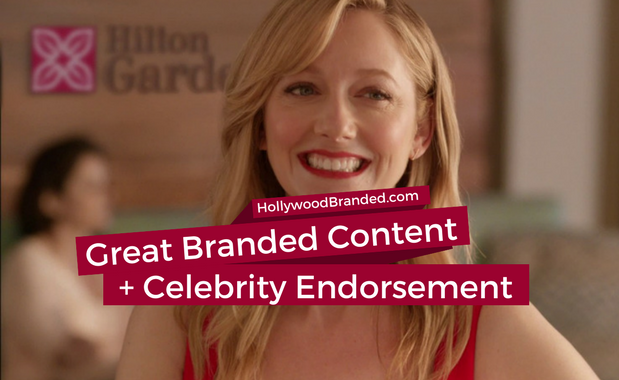 Why This Ad Campaign Works

What Hilton and their ad ad agency HZDG and production company Twist for display has managed to do with these ads is to create true branded content.  Theirs is a celebrity spokesperson that is recognizable based on the multiple comedies Judy Greer has appeared in, including Kitty Sanchez in the comedy Arrested Development, Ingrid "Fatty Magoo" Nelson in the comedy It's Always Sunny In Philadelphia, Trixie in the comedy-drama Californication, and Cheryl Tunt in the animated comedy Archer, and feature films including What Women Want (2000), The Wedding Planner (2001), 13 Going on 30 (2004), 27 Dresses (2008) and Love & Other Drugs (2010), Adaptation (2002), The Village (2004), The Descendants (2011), Carrie (2013), Jurassic World (2015), Ant-Man (2015), and the Planet of the Apes reboot series.  She also had an online workout series of videos called Reluctantly Healthy that aired on Saturday mornings for a year. And extremely fittingly, wrote a book called I Don't Know What You Know Me From: Confessions of a Co-Star.

That book title is exactly why this ad campaign is successful (besides good ad copy writing as well...)

We recognize the spokesperson, but not necessarily pinging it from exactly where we know her from.  But her familiarity allows the viewer to feel like she is more relatable as well.  And just like all branded content that is successful... the ad spot actually becomes interesting to watch.

And then the other thing important to brands managing ad campaign budgets... by using a someone more known for their co-star roles versus a headline star, Hilton has managed to create a more affordable celebrity endorsement partnership.

Hilton Garden Inn "Story :30"
The ad showcases Hilton Garden Inn's craft cocktails... and that they serve cheese plates too.  Who knew!
The logline: Miss Judy Greer checks in at Hilton Garden Inn to reminisce with her favorite bartender, Eddie, about the first time they met…just 5 minutes ago.

The ad showcases Hilton Garden Inn's offers 'sophisticated bites' including an array of appetizing appetizers.  This is not your typical mid tier hotel.
The logline: Sharing is caring...except when it comes to Hilton Garden Inn’s delicious appetizers. We can’t blame Judy Greer for dining on the selfish side…she’s just doing her

For those travelers who love to be in control of their stay, Hilton suggests you skip over those persnickety traveler reviews (like seeing a spider... outside!) and use their Honors app to choose the very specific room that will make you happy.  In this ad, Visa jumps on board as a partner, suggesting you pay for your stay with Visa.  That's some cross channel marketing!
The Logline: Spending hours reading hotel reviews? Save yourself the time. All you need to know is in the Hilton HHonors App. And when you book with the Hilton HHonors App, and pay with Visa, you get 5,000 Bonus Points
Hilton Honors "No Worries"
In this ad, Judy Greer wants to help you stop worrying about having a worry free vacation. You even get to use your phone as your room key like a remote control. Oh yeah... Visa jumped in on this ad too.

Hilton  “What’s To Compare?”
In this ad Judy Greer showcases the ease of the Hilton Honors app... and compares it to a blind date.  And guess what... Visa again too!
The logline: Opening tab after tab comparing hotels can be confusing. Not anymore. Everything you need is in the Hilton HHonors App. And when you book with the Hilton HHonors App, and pay with Visa, you get 5,000 Bonus Points.

In this :15 ad, Judy Greer talks about the simple things that are important when you travel.  Like the ease of getting your favorite cocktail at the end of a long day.
The logline: Judy Greer cozies up to the Hilton Garden Inn bar to impart some travel wisdom on us with her favorite bartender, Eddie, who happens to be quite the mind reader.

Interested in seeing how sales have netted out for a variety of celebrity endorsement deals? Then check out our video that showcases real world brands and their reported sales from having hired celebrities by clicking the link below!