Posted by Stacy Jones on March 15, 2018 at 8:02 AM
QSR And Their Love Of Celebrity Endorsements
Major celebrity endorsements are typical for a small handful of brand categories. Why?  Because the celebrity just costs so much, and the brand needs to be running a pretty comprehensive media buy in order to make the millions of dollars invested in the celebrity, payoff across the millions invested in media purchased.
Automotive, big name beverages, insurance companies and fast food companies are some of the biggest purveyors of celebrities for endorsement campaigns.  In this blog, Hollywood Branded looks at current fast food brand advertising campaigns who are using celebrity endorsements to capture the attention of viewers. 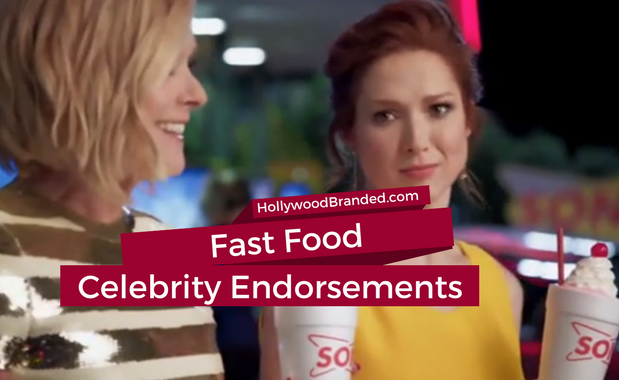 From Jack In The Box: Oh no she didn’t! Martha Stewart totally called out fast food for not having gourmet sandwiches, and Jack was all like, “I don’t think so! You should try my new Asian Fried Chicken Sandwich.” But Martha was like “No way...” and then she like totally ripped off his nose. And then Jack was like, “That was really messed up, Martha.” And Martha just looked at him and didn’t even apologize or anything. Not cool, Martha. Not cool. So now Jack’s starting a social media war. Take that, Martha! #JACKvsMARTHA

Ellie Kemper and Jane Krakowski who partnered together in Netflix's Unbreakable Kimmy Schmidt,have teamed up to produce several Sonic Drive-In commercials.  We love how more brands are leveraging their celebrity partners across multiple commercials versus relying on just a single partnership. It helps keep it fresh and interesting!

Sonic Signature Slingers "Yes to Flavor" :15
From Sonic Drive-In: "A cheeseburger that's under 350 calories. The new SONIC® Signature Slingers have patties made with 100% pure beef, mushrooms, and seasonings. A flavor-packed burger with none of the guilt, starting at just $1.99. This how you SONIC®."
SONIC Signature Slingers "Getting Away With It" :30 Commercial

From Sonic Drive-In: A cheeseburger that's under 350 calories. The new SONIC® Signature Slingers have patties made with 100% pure beef, mushrooms, and seasonings. A flavor-packed burger with none of the guilt, starting at just $1.99. This how you SONIC®.

From Sonic Drive-In: SONIC® Nights is the event of the season! Swing by and sip on delicious half-price, Real Ice Cream Slushes, Shakes and Floats. They're all half-price after 8 PM. So grab your friends and come in for a tasty late night treat. This is how you SONIC®.

Carl's Junior: Matthew McConaughey
Carl's Jr hired Matthew McConaughey to voice their TV commercial.  From the high end world of Lincoln to the late night world of munchies, McConaughey seems to be able to juggle quite the diverse role playing.
Open Sesame I Western Bacon Cheeseburger®
From Carl's Jr: Well looky-looky-look at y’all getting hit with the Call of Carl’s. What ya gonna do? Pick it up.

Getting That Celebrity Feel, Without Spending Millions
So what do you do if you are a brand that wants to use the power of celebrity, but don't have millions of dollars to pay their endorsement fees?  Or even millions of dollars to run a major TV ad campaign?
My suggested solution is... product placement!  By partnering with a music video, movie or TV show, you are going to be paying far far less than what it would cost to be seen rubbing elbows with a celebrity in our own commercial. Yes, you aren't going to be able to get a solid :30 seconds of love all controlled by your creative agency's script.  Instead, you are going to get embedded into content that you hopefully (if you do it right) will have a hand in helping direct the messaging about your brand, and at least the positioning of how it is seen on screen.  And you will also get the power of the property that is going to act as your media partner - and bring audiences to you through their own distribution platform, without your paying for that :30 spot to be seen.  And if you are really savvy - you can make the partnership become 360, by building in a retail layover campaign that helps direct your consumer back to the music video, film or tv show project you are appearing in.
Take a look at some of the blogs we've written on product placement that will give you more marketing tools to use to capture your consumer's engagement.  3 Reasons Why Productions Use Product Placement, as well as these blogs:
Check out the e-book our team wrote on Product Placement and Promotions to get a better understanding of what I'm talking about.