The Gauntlet Has Been Thrown

However, despite being known as the copycat, no one can deny that Instagram Stories completely took off, and we don’t doubt that same success will be experienced with Instagram Reels. Clearly, many brands didn’t doubt it either. In this blog, Hollywood Branded checks out the brands who took that leap and had some of the first brand partnerships with Instagram Reels. 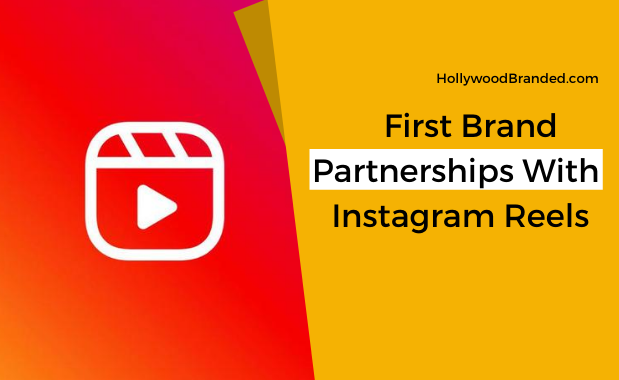 With the help of some of the makeup world’s top influencers, Maybelline launched their Reels efforts. In addition to fun, creative visuals from some of Instagram’s best, Maybelline created an original audio track that Reels users could easily repurpose in their own videos. The melody might sound familiar – it’s the brand’s iconic, “Maybe she’s born with it… Maybe it’s Maybelline!” The videos feature different influencers using a variety of Maybelline products. While the six IG Reels they have up so far have anywhere from 1.3MM to 3.9MM views, the audio has only been repurposed in other Reels 18 times. So, while the viewership of the new feature is taking off, it’s still taking Instagram users some time to generate their own content.

Check out their first Reel with makeup influencer, @NikkiTutorials.

Red Bull took a bit of a different approach. Using different Red Bull-titled original audio in each video, the videos are of viral-worthy extreme sports and stunt moments. It seems that Red Bull’s goal from their initial stab at Reels was to create more watch-worthy content than motivating other Reels users to create their own content using their audio. For starters, other than its name, “Red Bull – Original Audio,” there’s no sound of Red Bull in the tunes so having users repurpose doesn’t do too much for them. Additionally, there is very little, sometimes none at all, actual Red Bull branding in each of the videos so again, leading us to believe that Red Bull really was taking this opportunity to create content that drew followers to their Reels content versus inspiring followers to re-create. And it worked in terms of watchable content – all eleven of the Reels Red Bull currently has up have reached over 1.5MM views, most of them creeping into the 2-3MM views.

Check out one of the only Red Bull Reels that has even a hint of Red Bull branding.

Dunkin’ took yet another approach to their first foray into Instagram Reels. To help promote their drive-thru service, the brand used filters, stickers, AND original music, really taking advantage of all the things Reels has to offer. In the video, you see someone using a Dunkin’ filter to help her decide what to do order, adding some Dunkin’ stickers, all while Dunkin’ original audio is playing in the background. Similar to Maybelline, a couple of their other videos promoted Dunkin' specials and drinks, while others provided viewers with tips and recipes on how to make refreshing Dunkin’ drinks at home (all with Dunkin’ ingredients of course). In one of their most recent videos, however, the brand really was inspired by TikTok. Featuring comedic TikTok influencer, Travawyn Taylor, who has over 2.7MM followers on TikTok, but is still growing his 100k+ Instagram following, the video shows Taylor and his mom stopping to pick up some Dunkin’ to surprise his best friend. The choppy style of the video is very similar to a TikTok, but the kicker is Dunkin’s use of the infamous TikTok slow jam, "Death Bed" by Powfu. Not surprisingly, this exact video also ended up on Dunkin’s TikTok account. Dunkin’s Reels viewership is currently ranging from ~2k viewer to 14k, which is relatively lower than some of the other brands. However, Dunkin’s Instagram following is only 2MM relative to Maybelline and Red Bull’s 10MM+.

Check out Dunkin's first Reel below!

Louis Vuitton’s Reels easily have the most initial views so far out of all of these brands getting in the action. The brand took the premiere of Reels as an opportunity to promote two of their latest launches, their latest cruise line (#LVCruise) and the highly anticipated Louis Vuitton x Nigo collaboration (#LVxNIGO). Creating a very visually compelling series of models dropping their phones set to dramatic music (really not kidding when I say compelling; it sounds so silly in writing, but check it out for yourself below!), LV seemed to nail the creativity needed, which is ironic considering that they’re the only one of the bunch without an active TikTok account. Clearly they’ve been holding out on us! See for yourself below.

Does TikTok have to worry? In our opinion, no. TikTok has established themselves as the go-to, easy to create place for social media’s video heavy creators. Granted the addition of Instagram Reels might distract users from TikTok, and I even found myself scrolling through Instagram’s version of the “For You Page.” However, when users are really in the mood for those video moments, we’re confident that TikTok will remain the place to go.

What will be interesting to watch, especially from a brand perspective, is how brands are interacting with TikTok as compared to Instagram Reels. Will we see more brands like Louis Vuitton who never really got into the TikTok game have video content on Reels takes off? Will we see more brands like Dunkin’ repurposing the same content across both platforms? Our gut is that we’ll be seeing a lot more of this. Creating static images is a lot of work and compelling video content is even more work! Considering just how similar the TikTok and Reels are to each other, we project that a lot of brands will double dip with their content. It also shows just how easy it is for a brand (or a user!) to create a video on one platform and simply upload it to the other platform, so there isn’t any amount of editing features one has to have over the other. It’s going to come down to which platform brands are getting the most engagement from. Instagram we know has a built in audience for many, and many brands, even those active on TikTok, still have a larger Instagram following than TikTok, so maybe they’ll push their effort to Reels? But if it was us, we’d dip our toes into both waters! It’s of course an experimental time to be on Reels, but this is also the greatest opportunity to stand out, so we say get Reelin'!

If you're interested in learning more, we have you covered! Check out some our other content on influencer marketing.

If you're serious about your influencer marketing, our agency has the tools to not only get you started, but to make sure you thrive. Be sure to check out our Influencer Marketing School, which provides certifications for your team to better understand and implement influencer marketing.