Forget the Grinch; Kylie Jenner is the one stealing Christmas this season with the drop of her fifth holiday collection, Kylie x the Grinch. Kylie Cosmetics' newest collection dropped on November 19th and sold out instantly.

This collection is different than anything else Kylie has ever done because this was one of the first times Kylie Cosmetics was seen collaborating with anyone outside the Kardashian dynasty. In this blog, Hollywood Branded will dive into the marketing tactics and strategies Kylie Jenner used to make her newest holiday collection a raving success. 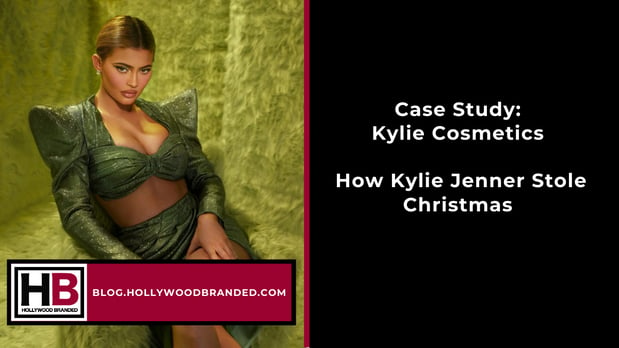 The Grinch is probably one of the least sexy characters with his hairy, green potbelly and negative attitude, but Kylie turned him around and did what most people could never do: she made the Grinch HOT. I know Whoville is screaming right now, because Kylie’s fans are too!

On November 12th, the day before the reveal, Kylie posted a photo of her in a sexy green outfit with a fuzzy avocado green backdrop asking fans to guess the theme of her collection. This post created a lot of sensation and buzz around her highly anticipated Holiday Collection and was only the beginning of an amazing marketing strategy put on by Kylie and her team for this line. 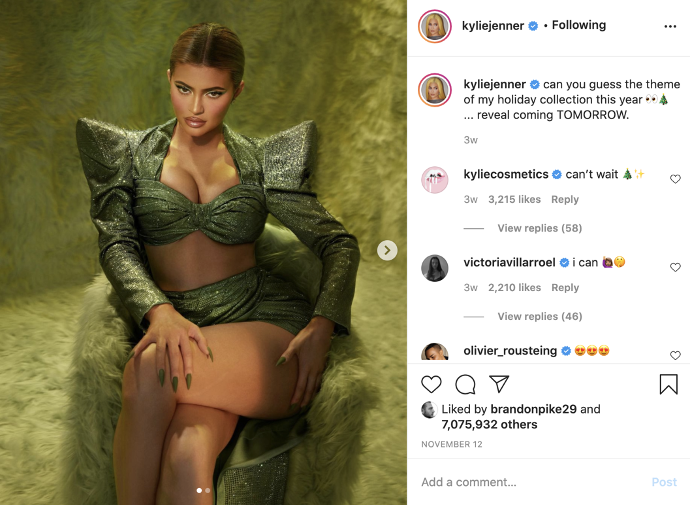 Kylie x The Grinch Is Coming To Town

On November 13th, Kylie x The Grinch Collaboration was announced, and her fans were in absolute shock of the collection. With most collections involving a licensed brand, only one or two products are created, but Kylie created 19 different makeup products all with thought-out Grinch branding and unique names. This is one of the first times we have seen a Kardashian/Jenner go beyond their family ties in collaborations, and of all things, it’s with The Grinch.

In an interview with Allure, Jenner said, "I have so many memories of reading How The Grinch Stole Christmas every year during the holidays and now my daughter loves it.”

Speaking of Kylie’s adorable daughter, Stormi, Kylie posted a YouTube video and Instagram post of her and Stormi baking Grinch cupcakes in their Grinch pajamas on the day the collection was released, November 19th. Genius. 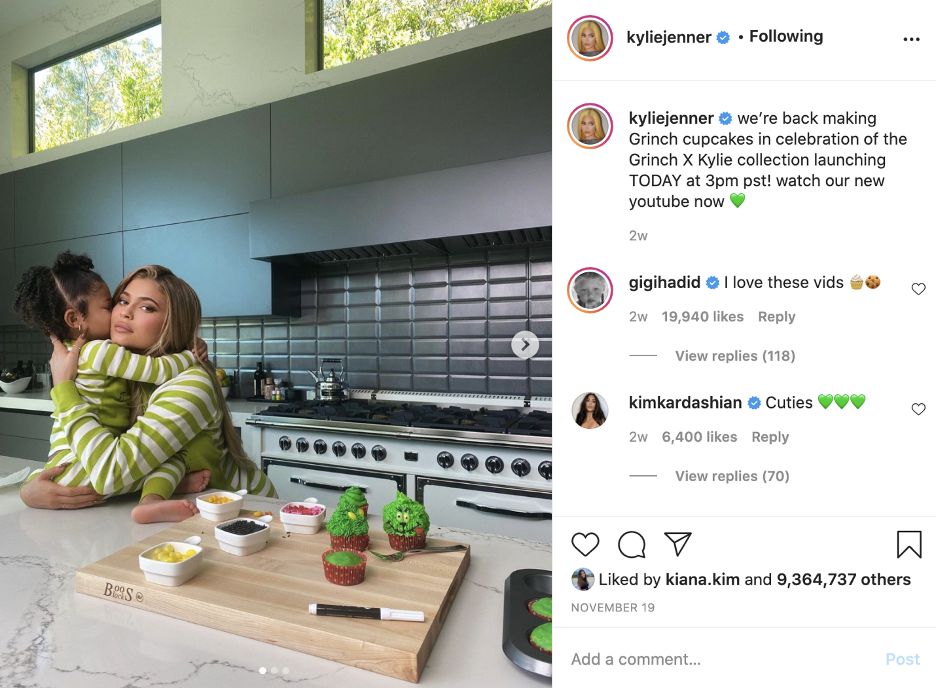 Why Kylie Wins Christmas This Year

Ever since Kylie Jenner founded Kylie Cosmetics in 2014, her brand has been a huge success. The first ever product she launched were lip kits and those sold out immediately. There is no change in pace for Kylie Cosmetics because the same exact thing happened with this year’s holiday collection. Kylie x The Grinch sold out instantly.

Whether or not Kylie Jenner is the mastermind behind the marketing put out with her products, she knows exactly what her consumers want, and she delivers every time. The packaging on every single one of her products is pristine, aesthetically pleasing, and they sell out no matter what the cost.

The Kylie x The Grinch PR boxes were selling for $350 dollars and sold out almost immediately. The boxes were designed to look like the cover of the original Grinch children’s book, plus a signed autograph by Kylie. The inside of the box was creatively done, containing 11 out of the 19 products in the collection. 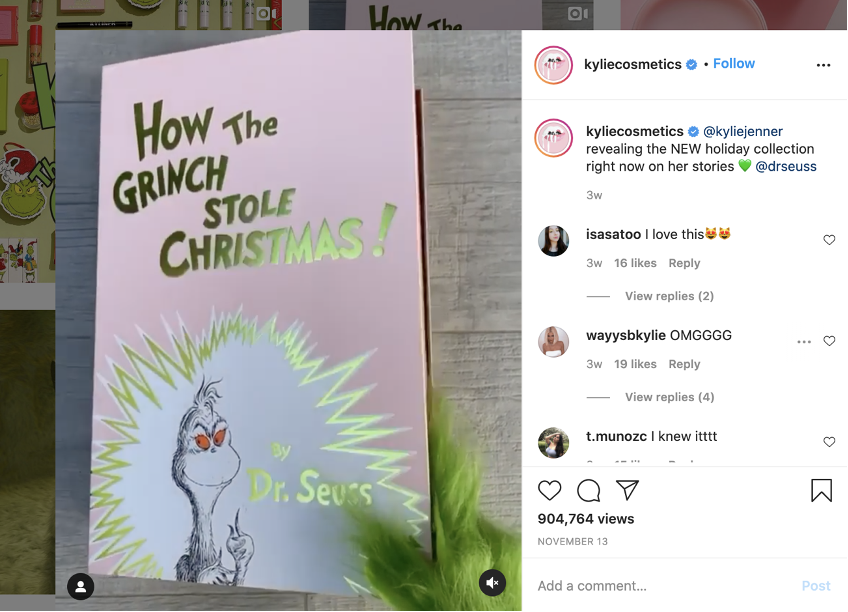 Kylie makes her collections irresistible to her fans and what is special about this collection is that, even if people aren’t fans of Kylie Cosmetics, they might be huge fans of The Grinch and buy her products because of this factor. Kylie widened her target demographic to an even larger audience, and it proved to be a huge success, yet again. 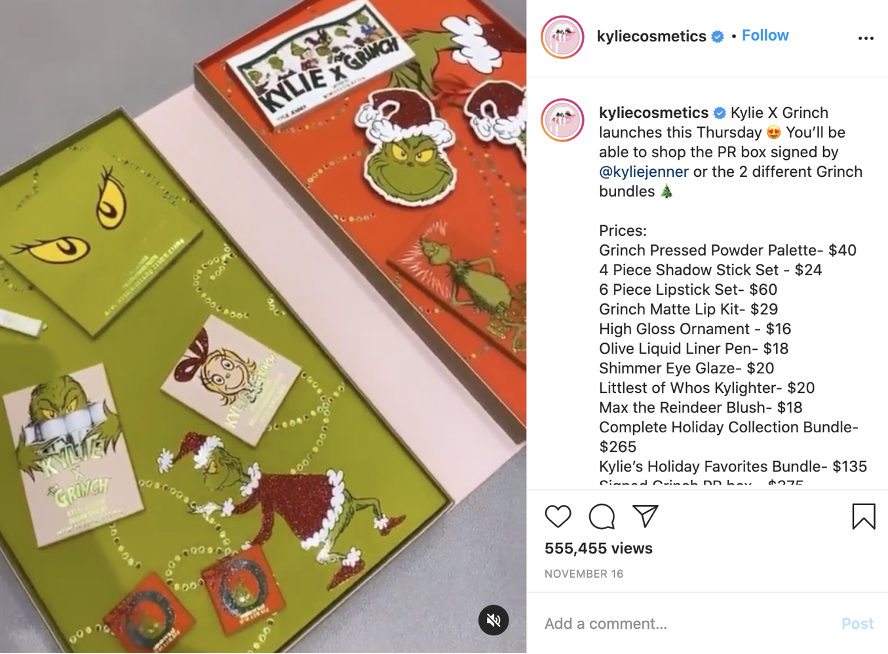 No Coal For Kylie This Year

Kylie Jenner not only did an impeccable job with branding her holiday collection but in marketing it as well. Kylie Jenner made sure her whole entire life, for the few days leading up to the drop to when it sold out, revolved around The Grinch. From the sultry Grinch Photoshoot, Stormi and her baking cupcakes in their matching pajamas, The Grinch visiting Stormi and even the tree in her home, she turned her entire world into the Kylie x The Grinch collection. For a lot of fans this means a lot to them because it shows the dedication, passion, and love Kylie has for this collection. People Magazine even reported, “The makeup mogul said the collaboration with Dr. Seuss is her "favorite collection of all time." 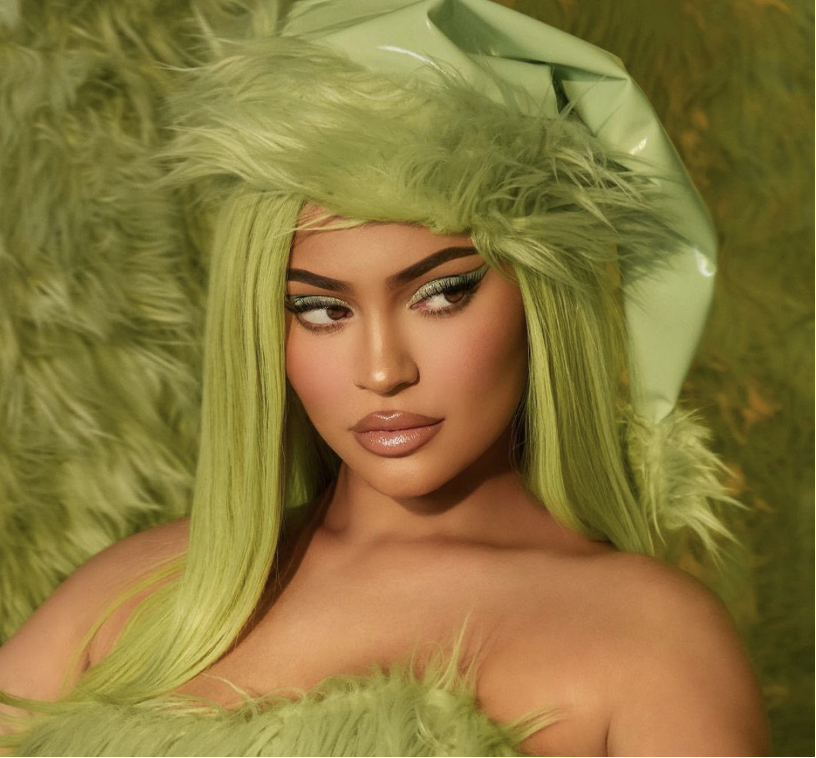 Your Chance To Hop On Or Off The Sleigh

Kylie Jenner has found huge success in marketing her brand and this is because she understands her consumers. Ironically, a lot of Kylie’s target market are made up of Gen Zer’s and millennials, and Jim Carrey’s The Grinch movie came out when the majority of her demographic were only children. Her fans most likely grew up watching this holiday classic, so to make The Grinch reappear, but sexy and in makeup form indicates that Kylie knows exactly who her audience is. To outsiders (and even some fans), it may have come off random as to why Kylie chose The Grinch for her holiday collection, but it was actually a smart marketing move on her end.

Kylie Jenner is a marketing queen and whether or not you like her, Kylie Cosmetics have proved to be a huge success time after time and shows she is doing something right. Brands can learn a lot from the way she captures the market and if you want to sell your collections out every single time like Kylie, take a look at her.

We've shared blogs our team wrote before on the power of Kylie Jenner and her Kardashian clan -- and why they make sales happen for brands. Check them out here:

Want to learn more about influencer marketing? Be sure to check out our guidebook below!