How One Brand Won Big On A Celebrity Influencer's Endorsement Mistake

It's How The Business Works

Celebrities are no strangers to endorsing brands across their social media platforms. Generally, a brand (or their agency!) reaches out to a celebrity's agent and they negotiate a deal for a social post. A-list celebrities get paid a pretty big chunk of money at six figures - if they will even consider it at all, as it may limit bigger endorsement deals in the same category.  B-list celeberties get paid over $50k.  And C-list celebs can make $25k plus.  And that's just for ONE social post!

In this blog Hollywood Branded takes a look at how one brand recently gained an insanely large amount of publicity all thanks to one little celebrity endorsement mistake.  If you consider him a celebrity...

What Is A Celebrity Endorsement?

By definition, celebrity endorsement is a form of advertising campaign or marketing strategy used by brands which involves celebrities or a well-known person using their social status or their fame to help promote a product, service or even raise awareness on environmental or social matters.

Marketers use celebrity endorsers in hopes that the positive images of the celebrity endorser of the brand will also be passed on to the products or the brand image associated with the celebrities. Celebrity endorsements are used by so many various brand categories - beauty and fashion are two of the most common - as are insurance, automotive and beverages.  Even a non-profit organization relies on celebrities to attract people's attention towards the cause, providing a wider audience reach to raise awareness towards the organization or issue.

Scott Disick - of Kardashian fatherhood and marriage fame - is 16 million followers strong. With that large a following fan base, it’s no surprise he racks in the dough from companies for Instagram posts! Normally, the content gets posted and although some can assume it’s sponsored we live in a world where we think sponsored advertisements are normal and we either like/ comment, unfollow, or just scroll past and continue on with our day.  Or if the celebrity influencer follows the FCC rules, we see the word #ad.

However one recent post in particular caught the eye of many of his followers! Scott accidently posted the WRONG CAPTION while promoting Bootea, a health & weight loss company that strives to promote an active, healthy and balanced lifestyle.  Not only was it the wrong caption... it was what the brand client wrote, telling him word for word what to do.

And by the way - weightloss and fitness 'miracle' potions are possibly the biggest success stories of social influencer posts as far as acting as a Direct Response vehicle to create instant sales.

Scott posted “Here you go, at 4pm post est write the caption below. Caption: Keeping up with the summer workout routine with my morning @booteauk protein shake!"

Disick followed the directions perfectly well, with the small but deadly mistake of posting “Here you go, at 4pm est write the caption below." 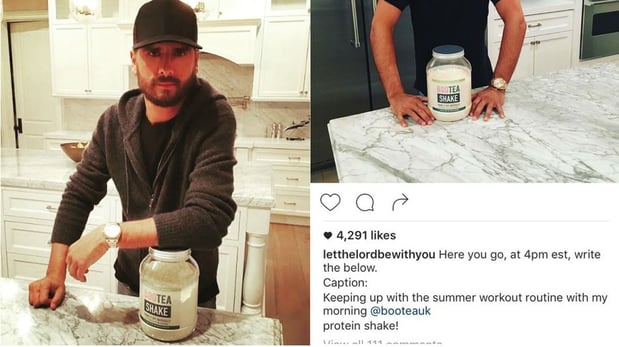 With the help of his followers, Scott noticed that he had made the mistake and edited the caption to “Getting my summer routine on with my morning @booteauk.” 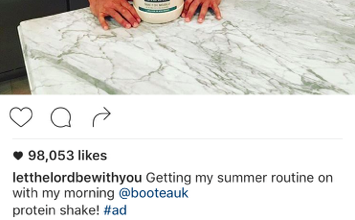 Twitter users of course had instantly created screenshots of the original caption and that’s what makes it so great! And the gaf spread quickly.

A number of online blogs such as Huffington Post , Buzzfeed, and Refinery29 picked the story up. This might be embarrassing for Scott but Bootea should be running all the way to the bank laughing!  The saying there is no such thing as bad PR is in this case quite true.  Far extending beyond Disick's own follower base, the name Bootea has now been on the tip of the tongues of reporters and fans alike.

How Bootea is Capitalizing From This Mistake

Bootea may have paid Scott for the post but they definitely got the most bang for their buck!

Bootea was under the assumption that they would have him post and of course generate sales from the post - but this is so much bigger as hype around the internet is spreading voraciously. Prime example - our team at Hollywood Branded had never heard of it.  And now we have. And someone may have even made a purchase... And no one here follows Scott personally on Instagram!

This may have not been expected publicity but publicity none the less that definitely has led to a sales uptick for the brand.