How UPS Took Celebrity Branding Partnerships To The Next Level

Unless faced with no access to the internet or social media, most know by now that Taylor Swift's new album will be released in November - and she has adapted a new bad girl persona to go with it. In her words, "The old Taylor is dead."  And one brand is supporting her full throttle.

Launching ahead of her new album release, UPS trucks branded with her Reputation album cover have been delivering packages all over the U.S. and in a unique twist, will be the exclusive delivery method for her new album to her fans. In this blog, Hollywood Branded looks at the celebrity branding partnership between Taylor Swift and UPS and the benefits to both. The Biggest Face In Music - On Delivery Trucks

For having such a good-girl reputation, Taylor Swift has been one of the most controversial and talked about stars of the 21st century. Between her beef with Kanye West to her recent spat with Katy Perry, as well as a slew of headline-making relationships (and break ups which our agency's CEO is interviewed about by CelebBuzz), Swift is always being talked about.

Ahead of her latest album release, Swift has partnered with UPS to put her album's branding on their trucks and have them exclusively deliver the album to fans who purchase it. 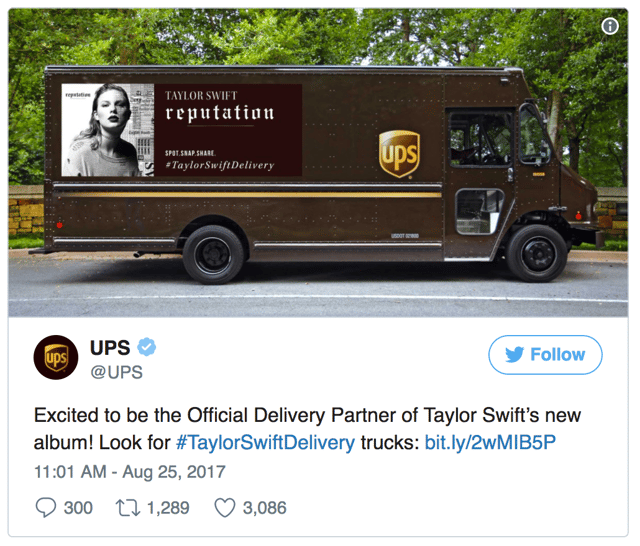 This is an interesting move for both as it almost hearkens back to the days of more traditional, physical advertising for artists and celebrity branding partnerships. However, in the age of social media, no marketing is traditional and, of course, social media users have been paying attention. On top of this, fans who pre-order her album through UPS are entered to win a sweepstakes where prizes include concert tickets, signed memorabilia and merch.

Even though the album hasn't been released yet, the trucks were rolled out in Atlanta, New York and Nashville, garnering massive social media attention. If putting your face on a UPS truck isn't a marketing power move, we don't know what is.

Could Your Brand Benefit From Working With A Celeb?

Are you interested in integrating your brand's product with a celebrity but simply don’t know where to start? There is so much more to product placement and celebrity endorsement partnerships than you may think and it is important to be educated about the key tactics to best fit your brand.

Working with a celebrity can be a huge boost in any brands marketing. Check out our blog post, Female WWE Stars Get Their Own Barbies In Mattel Strategic Partnership for an example and download our Product Placement 101 Infographic today to start learning more!