History Is Made From One Feature Film

When people talk to our agency about the origins of product placement, they often say to us "oh, E.T. and Reese's Pieces!" or "Top Gun and Rayban" - and while those two are certainly some of the most easily memorable and impactful product placements from the 1980's, there is one man who took it a step further.  And that man is... Austin Powers - we mean Mike Myers.

Mike Myer's films have, in almost all instances, taken product placement to an entirely new level.  And that goes back to his first big hit.  In this blog post Hollywood Branded looks at how Wayne's World made history with some of the most over-the-top product placements ever shown - and still remembered today. 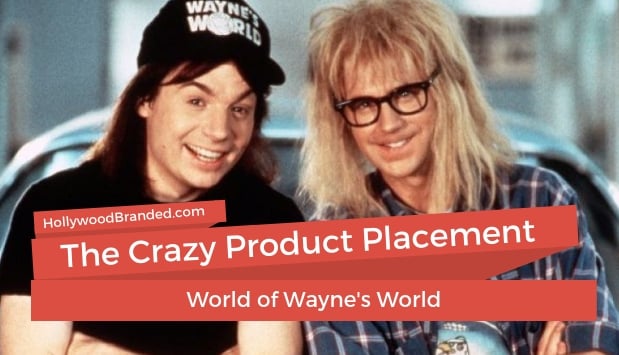 By 1982, when Steven Spielberg’s blockbuster movie E.T.: Extra Terrestrial was released, product placement in feature films was widely used and incredibly successful. For example, during production, M&M/Mars was approached with a chance to provide candy to be used in what is now known as one of the most famous product placement scenes of all time. They declined to be involved in the film, but Hershey’s Reese’s Pieces jumped at the chance, and were given the go-ahead to promote the film as it’s exclusive confectionary partner. Mars missed out, but Reese’s Pieces gained national fame and its involvement in E.T. and were permanently on the radar of candy consumers everywhere.

You can read this blog post to learn more about the history of product placement. It Made Brands Take Notice

1983’s Risky Business ushered in a new era for sunglasses when Tom Cruise sported RaTy Ban’s classic Wayfarers in the film. Sales skyrocketed, and 360,000 pairs of Wayfarers sold in that year alone. In 1985, Ray Ban was back at it again, partnered once again with Tom Cruise, in the movie that made everybody want to be a Navy pilot, Top Gun. Immediately after the film’s release, sales on the Aviator frame jumped 40%. Both the Wayfarer and the Aviator continue to top other Ray Ban frames as consumer favorites to this day.

Robert Zemeckis’s time travel saga sequel, Back To The Future II, features a number of incredibly well known brand names, such as Pepsi and Nike, and, of course, the iconic Delorean makes a comeback as Doc Brown’s personal time machine.

Nike made lasting waves with Marty McFly’s self-tying Hyperdunk shoes. In 2008, Nike released the “Hyperdunk McFly,” but they only released 300 pairs, making them a severely sought after collector’s item. In 2011, Nike released 1,500 exact screen-accurate Nike MAGs, albeit without the self-tying mechanism that made them so wild in the movies, to raise funds for the Michael J. Fox Foundation for Parkinson’s Disease Research.

And Then... History Was Made

These exemplary films are extremely well known for their use of product placement, but during the 1980’s, it started becoming a bit gratuitous at times. Audiences began responding in ways that were not always supportive. They felt that films and brands were working together to commercialize the movie industry and to sell a product. A number of films were criticized for their inorganic use of product placement, and, thankfully, one major film took that advice.

Wayne’s World was released in 1992, immediately following the boom of product placement usage in the 80’s. In a particularly intelligent scene, protagonists Wayne and Garth discuss promotional sponsorship and inorganic product placement by poking fun at just how bad it was. Audience reviewers found the satirical scene to be incredibly salient and responded to it quite well, and many cite it as their favorite scene in the entire film.

Some of the best known placements are musical. Though this is not orthodoxically thought of as product placement, the cast and crew of Wayne’s World made major radio waves when they used Queen’s rock-opera hit “Bohemian Rhapsody” in the oft-quoted headbanging scene. Driving through the streets of Aurora, Wayne suggest listening to the iconic song, and the whole gang sings along together. When “Bohemian Rhapsody” debuted in 1975, it barely broke into the US top ten, but when it was used in the film, it shot up to #2. Something incredibly similar happened to Jimi Hendrix’s “Foxey Lady.” It topped the Billboard Top 200 in 1992 after the film premiered.

Ready For Your Starring Role?

As an agency, we look for opportunities that make sense for both the brand and the content partner.  We don't want to create something where we hear negative feedback - instead, we want to provide an organic opportunity that just makes plain sense - and which helps the content by allowing it to be more real, and the brand to gain more viewer eyeballs and ears.