Our CGTN TV Interview On COVID-19's Impact On Hollywood

An Impact That Will Last For Years To Come

In the last week, movie theaters and Broadway have shut down, and TV and film productions have come to a screeching halt.  The content that people have typically turned to in order to escape and dive into the land of fantasy is no longer being produced.

I was asked to come to the studio to be interviewed for the CGTN television series The World Today by chief anchor Mike Watts to discuss the impact of the coronavirus is having on Hollywood. And it is truly dire.  In this blog, Hollywood Branded shares our recent TV interview with CGTN TV on the COVID-19's impact on movies, and dives in deeper to discuss the current state of Hollywood. 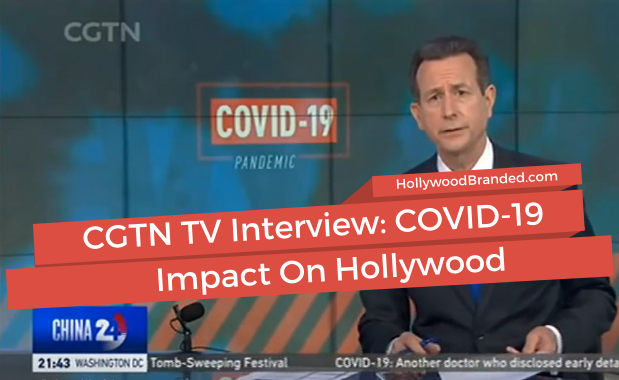 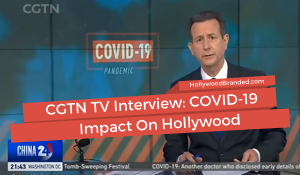 The TV Interview With CTGN

With our California safe at home policy in effect, it took some decisions on whether or not to go into the studio or to try to do a remote Skype call in.  Our internet has fluctuated so much at home with the heavy demand of so many people using it, and I was concerned with my office despite having a pretty fast line, that I choose to go in.

The remote studio location at The Switch's Pacific Television Center in Culver City had their own safety procedures in place. Only one person could enter - no guests. No typical hair or makeup options.  Hand washing upon entry was mandatory.  The only interaction you truly have when filming remote sessions is the audio / visual technician who will mike you up and ensure the camera is working in the room.  Truth be told I got a lecture from my mother for going.

Watch the interview below.

Loss Of Jobs In Hollywood

Similar to 2007’s writer’s strike which decimated the movie industry at the same time as our last massive economic downturn, production shut-downs are impacting hundreds of thousands of individuals who have lost their income. This includes all the talent and management agencies, as well as the support businesses.

This time it is different though from that decade ago – one of the biggest sustainers of the industry during that time was the rise of reality shows. I kid you not, I am absolutely convinced that the massive uptick in reality TV programming that are on the air today was due to broadcast networks getting a moment to breathe during that strike, and realize how expensive scripted TV is.  And giving reality programming an actual true marketing push, as there was very limited scripted content running on air for that late fall and winter season.

Instead today, no reality shows, events, documentaries or sports programming is being filmed and Hollywood is at an absolute standstill.

And there is a massively hurt industry here.  The production crew on sets are freelancers who go from one production to another, and they don’t have the same unemployment coverage as your typical full time employee.  And on top of this, are all the support companies and individuals who help make Hollywood tick along.  These include caterers, accountants, editors, animators, musicians, drivers, salons, managers, agents, rental prop companies, honey wagon bathroom rental and all those other businesses and more - completely shut down.  With no option to just 'allow employees to work from home'.

While many people think working in “Hollywood” means you have the same incomes as the executive producers and celebrities, these are typically people who are the everyday man and woman on sets and behind the scenes who make Hollywood run.

And it's not just going to be 'fixed' overnight even when the government clears Los Angeles and other cities to allow production crews of 250+ people to gather together to shoot. There is going to be a ramp up period once we are all cleared to work in group settings again. Some things will start right up, and others are going to have to find holes of availability to do re-shoots as films are already planned in advance to go into production on every calendar date of the next year plus.

Movies Are Going To Be Lived Streamed

Most major theater chains and indie/art house theaters are going to be closed down if they are not already - leading to over 40,000 theater screens are shut down.  And from April to mid summer the biggest blockbusters are released.

Studios are having to choose which films will be pushed to later releases, and which will be released through on-demand streaming alternatives for purchase or limited viewing windows.  The concern is that there is no known date for movie theaters to reopen, and there will be a shortage of ‘great’ dates once the theaters do come back as they delayed movies will be competing with those planned for later releases.  And if the movie studios are not careful, they will cannibalize their own later released films as there are only so many box office dollars to go around in any given weekend.

In another change, movies that typically take 90 days to be released digitally are being directly taken from theaters to the home to help drive revenues, like Sonic the Hedgehog.

And for studios trying to determine if they should cut out the theater and just released as a paid on-demand service, there is no data to show how much a massive blockbuster will earn by released digitally. These major films can gross up to a $1 billion, offsetting production budgets of $150 million and that same to market the film.

Movies impacted include Disney’s Mulan and Black Widow, Warner Bros. Wonder Woman II and Birds of Prey and Sony's James Bond - which is moving to Thanksgiving instead of summer.  Universals World of Trolls is going to stream, while Fast & Furious 9 will delay for a year.  The Minion's Despicable Me which is supposed to be a summer push, will not even be able to make that release date if the COVID-19 virus is over by that time as their animators in France can’t complete it in time.

And then films like Paramount’s Mission Impossible 7 which stopped filming Italy, and then the hundreds of other TV shows and feature films all around the world.

Oscars Are Going To Have To Make Some Changes

Movies typically play in theaters before digital distribution in order to qualify for the Oscars and must run for a minimum of seven days before December 31.  It’s been a bit of a war between the Academy of Motion Pictures & Sciences and Netflix and Amazon on what allows a film to qualify.

There are two options they may take:

They may finally allow films to be released first digitally to qualify.  If so, does that set a precedent that will change the entire model, and cause further erosion of theater owners like AMC who are already threatening bankruptcy?  It's a big risk.

Or they may change the window of when a movie must run theatrically to be considered - allowing films to still be considered and submitted leading into early 2021.

Broadcast TV Will Be Changed Forever

TV Upfronts where advertisers determine which programs they will spend around is antiquated and has been waiting a remodel.  And COVID-19 is going to bring changes even if they were previously kicking and screaming away. TV Pilot season is where a single production is shot, tested in front of an audience, then paraded in front of larger advertisers and their agencies to see if it has the power to get millions of dollars of support.  It's a very old model that actually costs a lot of money to do.  Dozens of pilots are shot - and very few are actually moved forward into production.  It provides safety to the network though because if they say 'yes' to greenlighting 10, 13 or 22 episodes, those costs are sunk.  And sometimes TV pilots don't gel and just don't work.  The magic of the cast, the director, and the storyline never comes together like it is supposed to.  So moving to a new path does have risk.  And it will mean the network execs need to keep a closer eye on the pulse of what goes into production and act on that always questionable - instinct - of whether or not it will work.

We likely will see TV networks are going to move to the same model as SVOD platforms, and they have already been recently showing signs where they don’t produce pilots, and move forward with confirmed pickups.

The reality is that consumers tend to turn to TV for news during troubling times. And then they turn to entertainment content to help them de-stress.
The US is already at a historical high for media consumption and it is only going to increase in the weeks ahead.

Nielsen reported total TV increases by nearly 60% across traditional live TV, DVR, VOD, streaming and other content. Scripted TV drama and comedy broadcast series are seeing audience increases and that too is going to rise.  But the fact is, we have so much content now available to appeal to every interest thanks to the streaming platforms. And that is where a lot of viewers are headed to.  Global trends show new Netflix sign ups rose in Italy by 57% and Spain by 34%.  Live streaming across YouTube, Twitch, Facebook and Mixer grew by more than 66% in Italy their first month of having the virus.

And for our team, the news is good.  Marketers are becoming more aware of the positive impact of product placement partnerships. Our agency is seeing a massive rise in interest by brand marketers for branded content partnerships where traditional advertising cannot be bought – especially from marketers in Asia who are now coming out of their two-month lock downs, and who saw first hand the higher engagement entertainment content received.

Whatever your advertising efforts, while brands may not see traditional advertising seeing to immediate sales, now is the time to think more top of the funnel in marketing, with positive brand awareness being key.

Check out this Product Placement e-Book we wrote to help provide even more insights on this trending marketing practice.