The Nip Slip Heard Round' the World

No I’m not talking Janet (yet), and no I’m talking Miley either. I’m talking about America’s newest favorite heartthrob, certified #sadboy (we can fix him right?), and dater of some of the most beautiful women in the world: Pete Davidson.

This past weekend, Miley Cyrus and Pete Davidson co-hosted “Miley’s New Year’s Eve Party," which, no lie, was the coolest New Year’s Eve special I’ve ever seen on TV.  In case you missed it, it was basically as if the Grammy’s joined forces with all of the best 90’s MTV Music Award shows, and then seeded their audience with some of your favorite current day models, personalities, and cool kids of the internet. Oh and Miley had a Janet Jackson-esque wardrobe malfunction. In this blog, Hollywood Branded discusses how Pete Davidson’s reaction to Miley Cyrus’ nip slip during his co-hosting gig for “Miley’s New Year’s Eve Special” on NBC this past weekend has cemented him as THE Feminist Icon of 2022 we didn’t know we needed.

This is How You Throw a NYE Party!

Let me just start off by saying that this entire show was absolutely fire. As a former New Yorker (and still one at heart) it pains me to say this, but Miley made NYC and CNN look like a bunch of damn fools. Yeah NYC had Andy Cohen get overserved and call Ryan Seacrest a “loser” on air, and yeah Planet Fitness accidentally made the sickest purple top hats I’ve ever seen, complete with yellow beaded fringe that the whole tourist audience of Times Square was definitely forced to wear, but I couldn’t name a single performer that evening. Also half the lights in Times Square seemed to be out, the crowd looked freezing, and I’m pretty sure cheesy show tunes blared as the ball dropped. If I were NBC and CNN was my cousin, I’d pretend I didn’t know her. 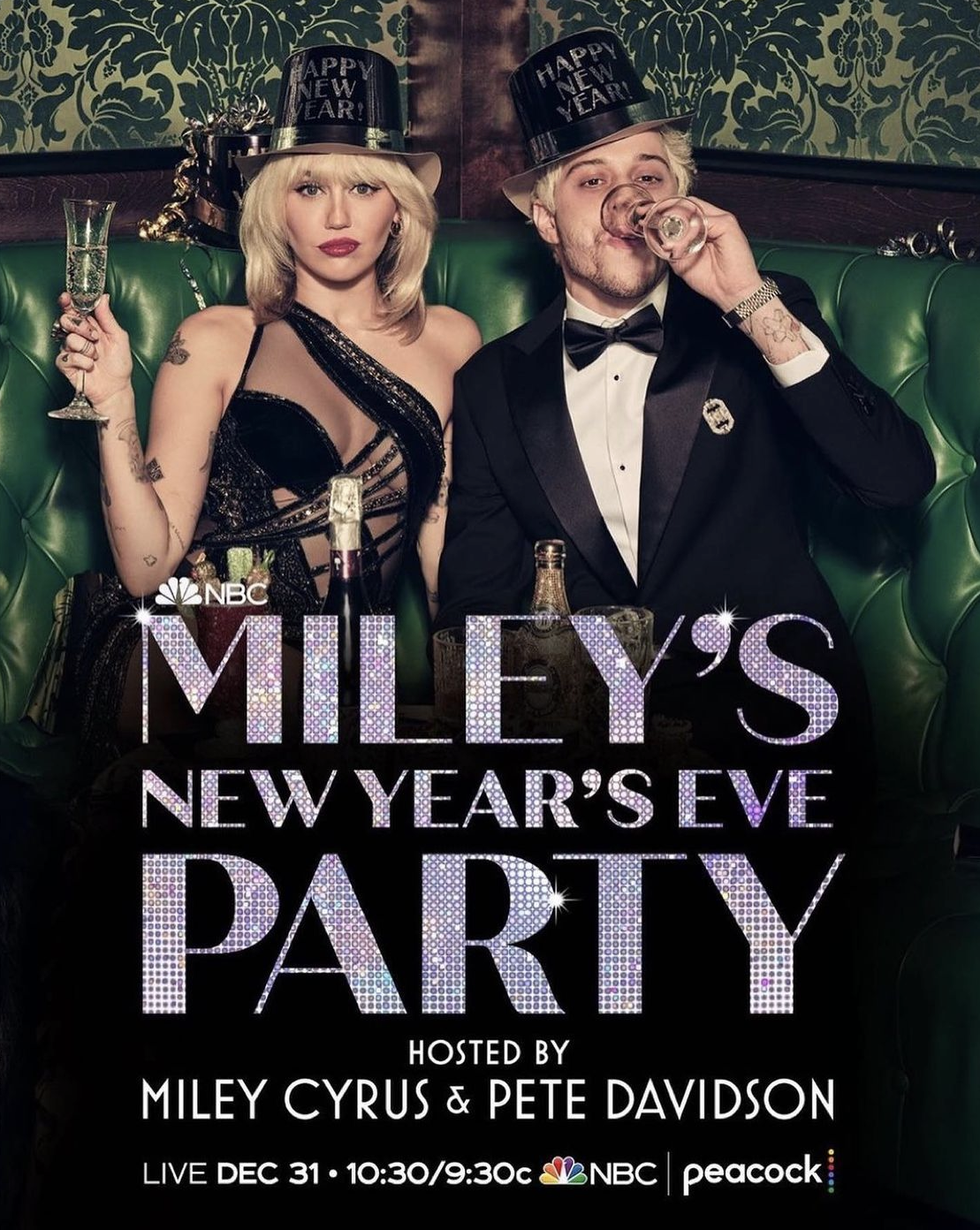 It also didn’t have the 2 best things of the entire night: Miley’s wardrobe malfunction – handled like a total pro I may add (S/O @BradleyKennethStyle) - and Pete Davidson coming to her rescue by immediately exposing, his “boobies” in solidarity. Don’t know what I’m talking about? Here are the video spark notes.

This is Important For a Few Reasons

I’ll start with the most obvious: Janet Jackson and Justin Timberlake’s 2004 Superbowl performance where Justin infamously ripped off Janet’s bra revealing part nipple/part sterling silver pastie for 9/16ths of a second. The Federal Communications Commission (FCC) fined CBS $550,000 dollars after an outcry of indecency from the American public - and for the record, that's about $805,000 in 2022. Not once did Justin apologize to Janet. Which is a shame considering this incident, widely recognized as his fault, effectively ruined Janet Jackson’s career.

And the Grammy Goes to... Misogyny

On top of that, a week later Justin performed at the Grammy’s (which also aired on CBS), and won Best Male Pop Vocal Performance for “Cry Me a River," which ironically was a song that publicly shamed his ex-girlfriend Britney Spears.

Janet Jackson on the other hand, was mysteriously absent from the Grammy awards that week.

According to the documentary Malfunction: The Dressing Down of Janet Jackson, Janet wasn’t absent by choice, but she was actually uninvited by head CBS executive Les Moonves because he didn’t feel her Superbowl apology was sincere enough. Moonves was widely known as one of the most powerful men in the industry, and infamous for holding grudges. So it wasn’t much of a surprise when Janet released her newest album “Damita Jo” one month later, that it was met with underwhelming sales and little to no airtime on both TV and radio. 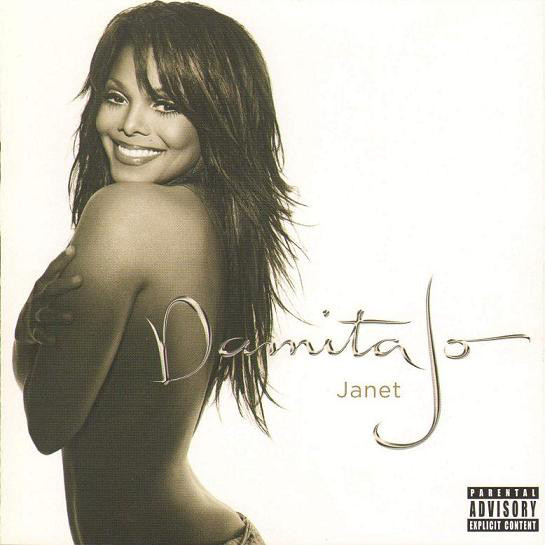 The very next year, Justin Timberlake begins recording his next studio album FutureSex/LoveSounds which is released in 2006 and debuts on Billboard’s Top 200 chart at #1, and was one of the best selling albums of the year. That same year he stars in his first feature film “Alpha Dog”, thus launching is foray into film. His career flourished while Janet’s fizzled away.

Want to Be Like Pete? Don't Wait 19 Years to Apologize.

Fast forward to 2018, Justin Timberlake is asked back to perform at the Superbowl, however the world had changed drastically. The #MeToo movement was in full swing, Les Moonves was fired from CBS for sexual harassment, and Justin still never apologized to Janet. In fact, he didn’t do so until February 2021 - after the documentary “Framing Britney Spears” was released, publicly accusing him of racism and misogyny. His apology came in the form of an Instagram post to both women at the same time... because I guess individual apologies would have been asking too much. 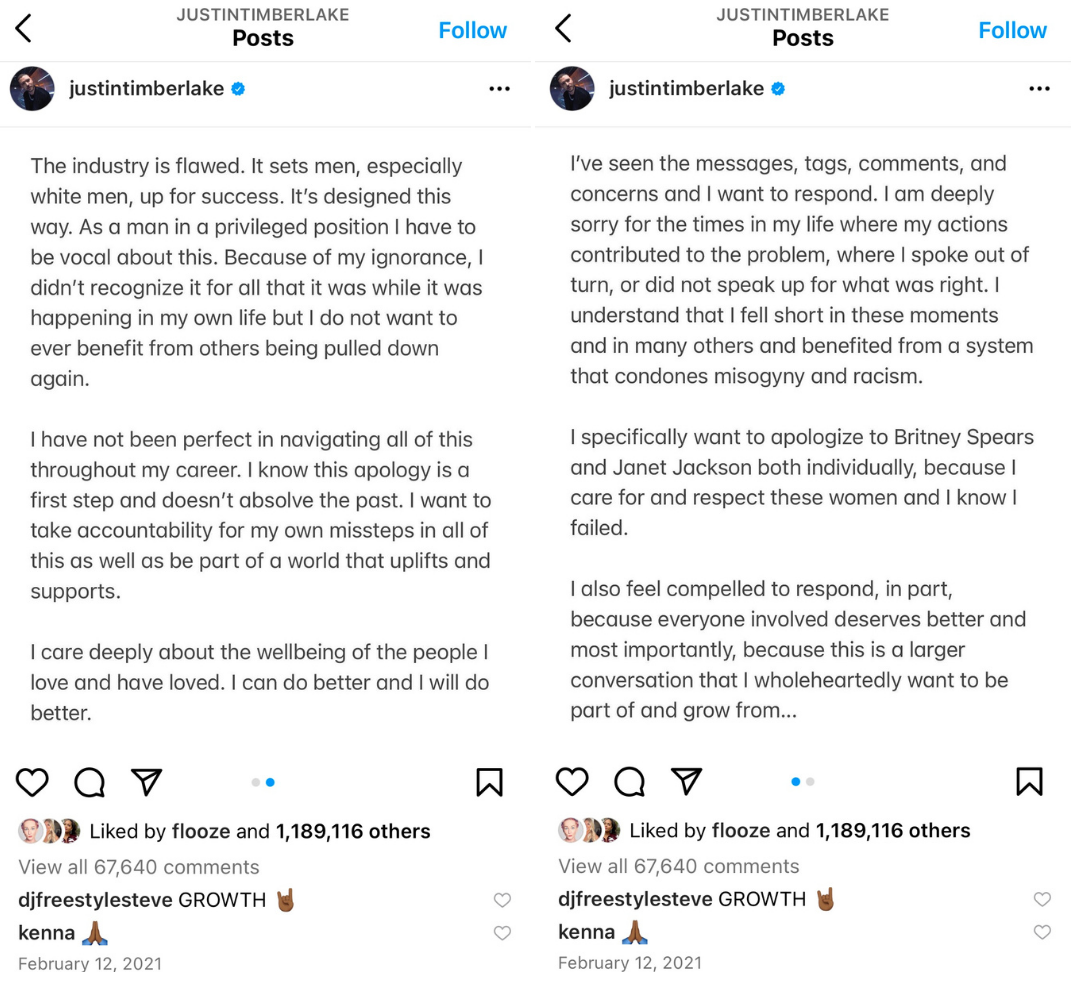 So What Does This Have to do With Miley & Pete?

Well for one, it display’s Davidson’s inherent empathy for women. Upon hearing Miley may have had a “little boob slip”, he immediately lifted up his shirt to show his. He didn't wait 19 years, or really even 19 minutes to do so. He just did it. Because he's a GD icon.

Now, I don’t know what the FCC is up to these days, but if they were planning on going after Miley, they’d have to go after Pete, too. It would force the FCC or any other media to confront gender bias and explain why they were villainizing women for having nipples, but not men.

What Pete did was an earnest and wholesome display of equality, live on air. It’s no wonder he’s considered a heartthrob. He’s respectful, self-deprecating, and tbh, I can't help but love a guy that can rock 2 necklaces, 3 bracelets, 1 watch, and a pair of sunglasses all at the same time. S/O to his FEMALE stylist, @Britt.Theodora for holding down the style game.

If you want to see Miley’s whole performance including 24k Golden, twerking with Saweetie, and her very profesh 30 second outfit change utilizing the red Saint Laurent Blazer from her previous look, then the video below is for you.

Oh and PS. If you want to cop her wardrobe malfunction outfit, it’s by Akna and still available! Top here. And skirt here. Have at it!! Check out these blog posts from our team to learn more about feminism, Miley, and all things brand partnerships.

Are you a pro podcaster? Want to share your marketing tips? Apply to become a guest on our show "Marketing Mistakes (And How To Avoid Them)!"