Helping A Brand Become The Official Partner Of Project Runway

Project Runway has been on air for sixteen seasons and is an incredibly popular fashion design competition show hosted by international model, Heidi Klum and fashion expert, Tim Gunn.  This brand-friendly series challenges fashion designers from every walk of life to create a themed outfit from scratch each week, with very limited time and materials.

Specifically what brands love about the show is the fashion platform's seamless and organic way the producers are able to build brand partnerships that work for both the show's viewers and the brand. In this blog, Hollywood Branded provides a look into a product placement case study by walking through a Pilot Pen partnership on Project Runway, and how it raised awareness about the brand's unique features. 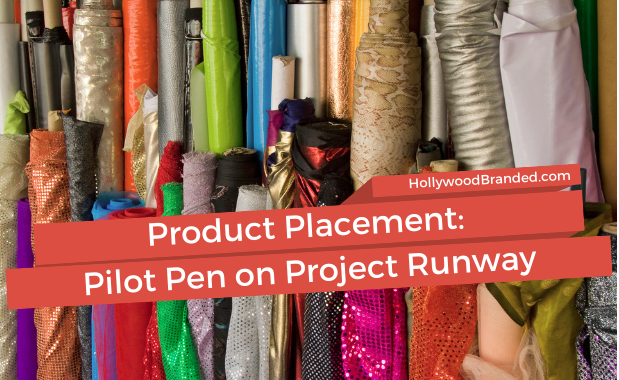 As Project Runway is so heavily design-focused, a pen brand is a natural fit. And one that writes AND erases? This easily creates a partnership made in heaven. As designers are forever tweaking their designs, Pilot's expansive color line and very unique ability to completely erase a misplaced line, can be an absolute design lifesaver.

In the show’s latest season, our agency established a tandem partnership with Pilot's agency of record, Bright Red, Pilot Pen making it the official pen of Project Runway. This allowed the program to showcase their line of creative-friendly pens, the Pilot FriXion Erasable Pen. 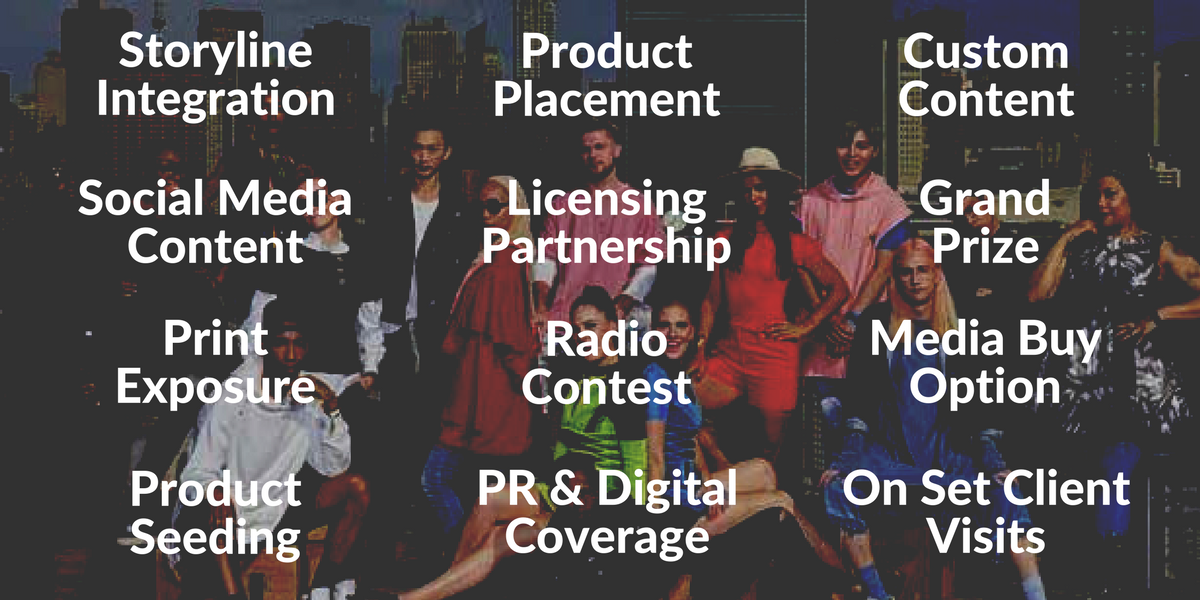 Throughout the series, designers are organically captured using their Pilot FriXion Pens when sketching their eccentric looks. As the official pen sponsor, Pilot Pen was the only writing utensil allowed on set. Funny anecdote… the client and our agencies were on set for the show’s first episode taping when a producer noticed a pencil in the corner.  The next thing we could hear on the walkie-talkies was someone yelling, “Get the contraband off that table! No pencils allowed!” so we were immediately confident in the show’s loyalty to Pilot! In our opinion, the Pilot FriXion Pen stole the show!  So let's take a look at what the partnership was comprised of.

Each episode follows a simple structure – at the top of the hour, the competing designers are given their design challenge, whether it be a particular theme or limited materials, and then they immediately sketch their designs before bringing them to fruition at the end of the competition round. As a result, audiences regularly watch their favorite contestant using the very colorful variety of Pilot FriXion Erasable Pens to map out just how they were going to bring their design to life. The placements were truly organic because it was such a crucial moment in the show that producers would have showcased whether it was sponsored or not.  This is always a win when you can find a natural place where the brand is complimentary to the scene versus forced.

Before the show went into production, we worked with producers to contract out and just as with any brand partnership deal, one of the most important points to discuss is branding exposures.  It's a juggle as the production will always want less than the brand.  The production's goal is to keep the branding to an absolute minimum to prevent it from becoming too over the top and intrusive to viewers.  The brand's goal is to spend their marketing budget wisely to get as much exposure as possible.  It's a conversation that has to happen early on, as it lays the groundwork for the overall structuring of the deal, and if it will even move on.

With Project Runway, the show's premise is a natural canvas for brand partnerships, as are many reality contest shows.  It's not the same when watching a drama or sitcom, and brand deals can be more pronounced and still feel organic and natural.

So one of the specifics of this partnership was a minimum number of times the pen’s logo needed to be on air, while writing and erasing. To help ensure this number would come to life, we had the brand create special pens that had the logo on both sides of the pen and in larger non-shiny print so that the camera could easily pick it up.  It's quite difficult (and next to impossible in reality TV) to go back in post-production to work on making a logo pop.  That is what makes having a product on set that is well branded is so important. 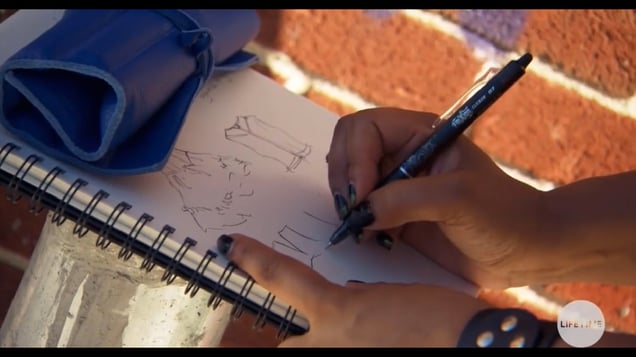 Thanks in part to both diligent producers and the added logos, the Pilot Pen branding was clear and identifiable in over two dozen scenes throughout the season. It also helps that the pen comes in shades like bright blue and hot pink and pops off the screen. 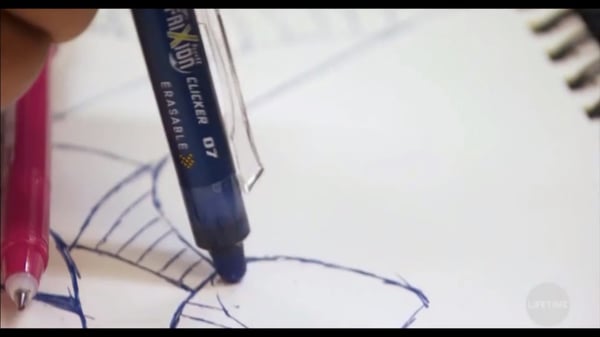 One of the main aspects that Pilot Pen wanted to highlight was that the pens were erasable, so whenever the designer would make a mistake, it was easy to erase their sketch and start again.

Hearing the hosts and contestants say, “Pilot FriXion Pen” was an important element to this campaign, because it’s one thing to consistently see a product and its logo, but hearing its name brings that recognition to another level. Part of the integration deal included a verbal mention with messaging about the erasing feature from the fashion expert himself, Tim Gunn. It was a crucial (and exciting!) part of this campaign because his verbal mention came in the first official episode of the season. Gunn introduced the contestants to their writing utensils and explained what they were and why they would be so great for them to have for the upcoming season.  Because... they are erasable!

As Project Runway is a design show and the pen is geared towards creative minds, it was also important to get a designer’s opinion on the product. So, another deal point in this campaign included a verbal mention from one of the contestants. To keep it as organic as possible, the actual verbiage of the contestant's Pilot shout-out wasn’t contracted, only that it had to exist and be positive, which wasn’t difficult because everyone loves the pens.  (Seriously. They erase. And it's like magic.  Our entire office loves them.  And the feedback from set was that everyone loved them too!) A little more than halfway through the season, one of the show’s most talented and animated contestants, Kenya, let the audience know that, “Pilot FriXion Pens are amazingly dope!”  This wasn't a moment where the producers coached her to say that. It was genuine, real and heartfelt.

As this show is a competition series, the winner receives a prizing package at the end of the season. To motivate these contestants through their challenges, Heidi Klum herself reminds them in each episode what exactly is at stake, and this season it included a very glam gift courtesy of the Pilot FriXion Erasable Pen.

In every episode, Heidi would talk about all of the prizing the finalist would win, she would announce, “From the Pilot FriXion Erasable Pen, The Official Pen of Project Runway, the winner of Project Runway will receive a lifetime supply of pens and an all-expense paid luxury trip to Japan including a five-star stay near Japan’s fashion center,” while a montage of Pilot FriXion Pen scenes played in the background. Although there were additional hard costs to the trip, the value in the additional weekly verbal and visual exposure was well worth it.

For any partnership deal, brands need to keep in mind 'added value' opportunities to the brand integration partnership. There are often additional requests by the production that make the story better for the brand.  In our team's opinion, you want to maximize any brand partnership to the fullest extent.

Brand Partnership: Behind The Scenes Video

A big win for this campaign was the exclusive Behind the Scenes videos of the contestants talking about their experience with the Pilot FriXion Pen. Working closely with production, our team crafted questions we wanted the crew to ask the contestants. These questions pertained to the pen specifically, but also to their creative process and inspiration. The purpose was to have Pilot FriXion Eraseable Pen be able to bring a branded story and perspective to Pilot Pen fans that they may not have gotten on the show.

Here's a quick snippet of some of the content.

As you can see with the Behind the Scenes content, part of the partnership goal was to be sure to not limit the Pilot Pen exposure to only what you saw on TV. Working with Pilot Pen’s social media team at Bright Red, Pilot brought this partnership to life in their social channels with the content secured from the partnership. Across their Twitter, Instagram, and Facebook, Pilot Pen was able to boast great show content exclusively to their followers, including a meme of Kenya’s, ‘Amazingly Dope!’ shout-out:

The Project Runway team supported and really embraced the additional social media love and as long as there was prior approval to each post, Pilot was able to promote as much content as they wanted that the show specifically supplied to their show brand partners. 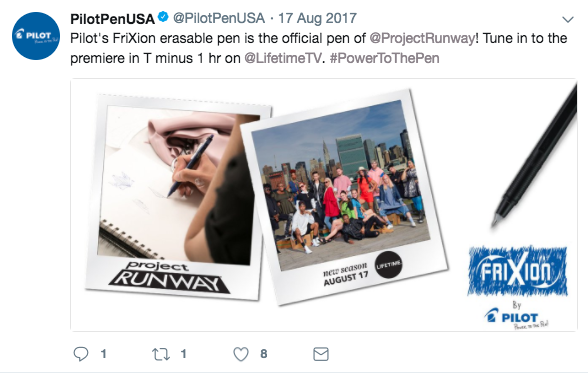 Here’s a tweet from Pilot Pen announcing the partnership and telling followers to tune in to the premiere!

One of the most exciting features of the show’s final episode was a runway show during New York’s famous Mercedes Benz Fashion Week. Another major element of this campaign was securing tickets to this fashion show that Pilot Pen could give away through a social media and a radio contest. 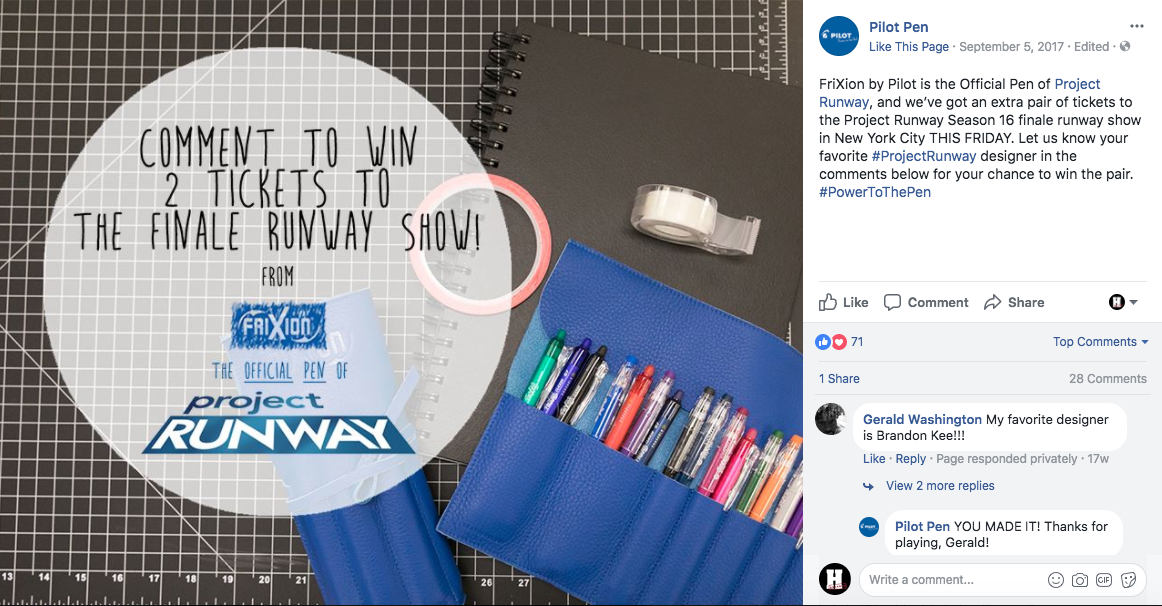 And of course to get it in full action, here's Pilot's Instagram post of Kenya's, 'Amazingly Dope' shout-out!

Living for this 💯 review of our FriXion erasable gel pens from #DesignerKenya of @ProjectRunway. FriXion is the *official pen* of #ProjectRunway. Tune in & get inspired, Thursdays at 9/8c on @LifetimeTV. #PowerToThePen

Here is Pilot's Facebook announcement of the winner of Season 16's Project Runway! 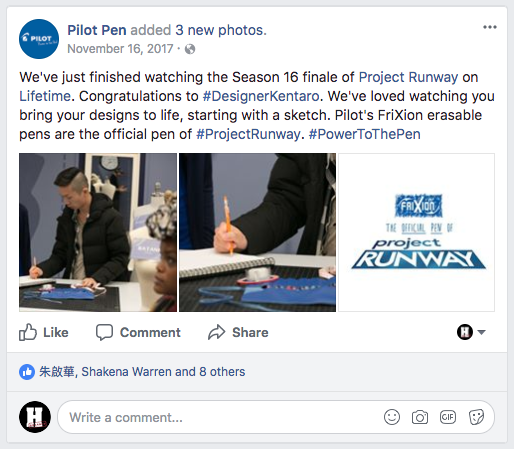 We also worked with production to secure original sketches by the show’s contestants that Pilot was able to give away via social media. See Pilot's tweet below! 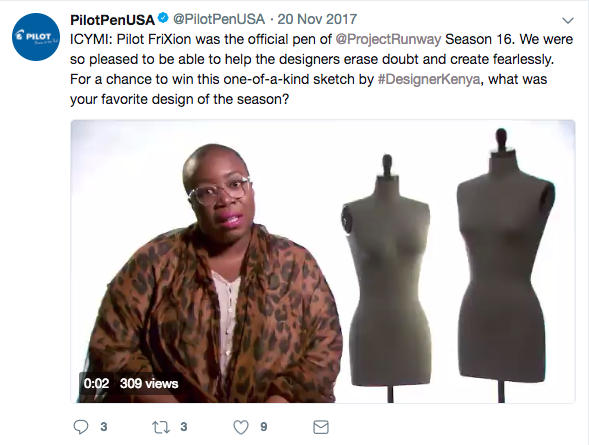 Pilot and Bright Red TWBA secured an advetorial in Marie Claire to feature the season’s winner with Pilot Pens.  This was a great way to extend the on-screen partnership onto another medium -- especially as Marie Claire served as the official magazine partner to the show and it's readers were already consistently exposed to Project Runway. 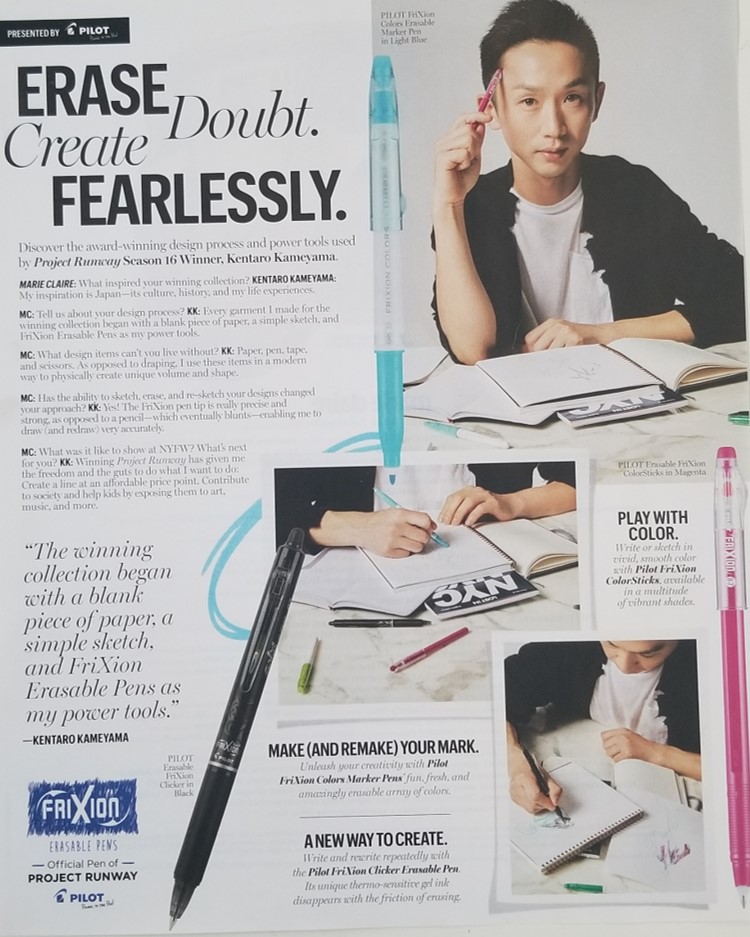 As a Project Runway viewer, there was no escaping the Pilot FriXion Pen. The brand was also able to take elements from the well-established show and create their own branded content so that their social media audience got an even better taste of the campaign. Each episode drove Pilot’s messaging home just a little more so that by the end of the season, you were dying to get your hands on a FriXion to be able to write and erase for yourself. And with 12 episodes and 3.3 million viewers per episode, this made for a very happy client.

The on-show content alone proved this campaign to be a success. However, adding elements like the prizing reel, behind the scenes content, and social media giveaways made this partnership a slam-dunk success for the brand.

To learn more about making product placement work for your brand, read our blog on 3 Reasons Why Productions Use Product Placement, as well as these blogs:

Interested in learning how to get your brand involved in a TV series?  Check out the video below where we walk you through the steps to make it happen!