Tapping In To Brand Potential

Female rappers and hip-hop artists are increasingly seeing the spotlight as brand influencers, and California native Saweetie is no exception. She has been in the spotlight for a few years now after releasing her first single “ICY GRL” that describes Saweetie to a T: a self-determined woman who is all about her hustle and looks good while doing so. As a self-proclaimed girl boss and go-getter, she has jumped on every opportunity to partner with and promote brands who match her style.

Strategic partnerships in the beauty and fashion space keep rolling in for the “Tap In” and “Best Friend” artist, but other brands should keep an eye out for opportunities to partner with this up-and-coming star in the future. In this blog, Hollywood Branded highlights Saweetie’s success in securing brand partnerships and describes how she can really be a brand’s best friend. 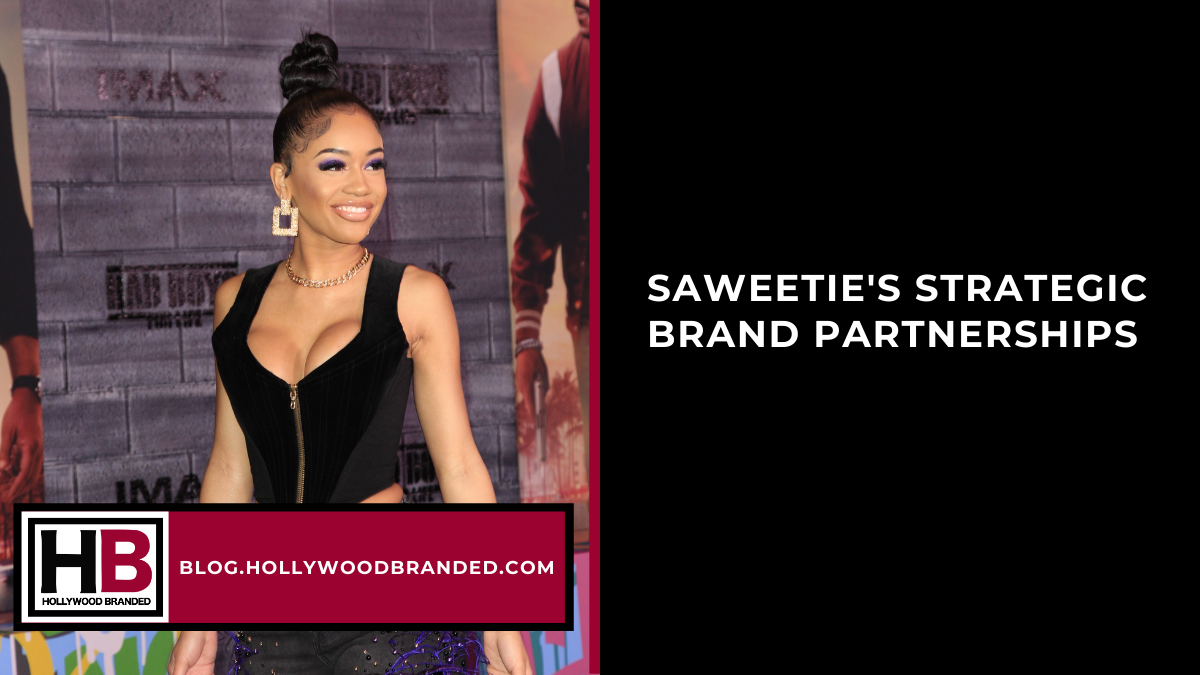 “Work hard, play hard” is a motto that singer, songwriter, and rapper Saweetie certainly lives by. Growing up in Santa Clara, Saweetie was a regular girl with big dreams who always knew she needed to work hard for what she wanted. She started to write music when she was only thirteen years old but decided to pursue a degree in communications at the University of Southern California. Saweetie began to focus on her rap career after college, and this determination to succeed both in school and in her music career set her up for pop culture success.

Her debut single “ICY GRL” put her on the map when she earned platinum certification for the song and signed to Warner Records. The lyrics of the song highlight the girl boss attitude that Saweetie now demonstrates through her brand partnerships. In the song, she raps that she’s “charging by the minute cause [her] time is very pricey” and that she “be where the bosses be.” Saweetie has certainly kept up that promise of being on top; without ever releasing a full album, Saweetie was nominated for Billboard’s Top Rap Female Artist of 2021. Her upcoming debut album Pretty Bitch Music is supposed to be released this year, so now is the perfect time for brands to partner with this rising hip-hop star. 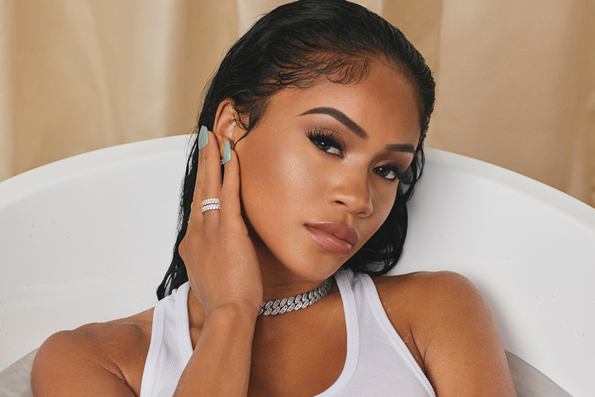 Why Saweetie Is A Brand's Best Friend

For brands looking for success with Gen Z, women, fashionistas, and go-getters, Saweetie could be the perfect celebrity partner for several reasons. First of all, Saweetie has a total reach of 35.22 million people across her Instagram, Facebook, and YouTube platforms. Her sponsored and branded posts like her partnerships with KISS Colors and Revolve get just as much engagement as her personal content. She has the ability to capture different interests using her social accounts given that she makes music but is heavily involved in beauty, fashion, and philanthropy.

Speaking out and giving back is now expected of companies and Saweetie has teamed up to make sure brands keep up their end of the deal. Recently, she has partnered with Quay Australia to bring back their Quay to Success Scholarship. This partnership is only one example of how she has helped a brand do good for others. In the past, her summer 2020 collaboration with PrettyLittleThing, At Home with Saweetie, donated all proceeds from the collection’s sales to the Black Lives Matter movement.

Finally, digital content such as song lyrics and music videos that are tied to Saweetie’s name and image help to create brand impressions on viewers long after a social media post has come and gone. Beats and Powerbeats by Dre were featured in her “My Type” and “Tap In” music videos. These examples of product placement have driven sales and solidified Saweetie as an ambassador for the brand.

Despite being an up-and-coming artist over the past couple years, Saweetie has already had several brand partnerships and collaborations in the fashion industry. Top fast fashion brands including Revolve, Fashion Nova, and PrettyLittleThing have tapped into Saweetie’s fan base by using her as the face of partnered clothing lines. At PrettyLittleThing, Saweetie has designed three of her own boujee collections, and the first drop in 2019 sold out quickly. Revolve has been a consistent brand in Saweetie’s playbook ever since she performed at Coachella’s Revolve Fest in 2019. Currently, she is involved in Revolve’s #RevolveAroundTheWorld campaign which has resulted in billions of impressions. She also collaborated with Fashion Nova as a brand ambassador.

Although she has already teamed up with many fashion brands, Saweetie is also a regular celebrity collaborator with makeup brands like Rihanna’s Fenty Beauty and Morphe Cosmetics. In fact, one of Saweetie’s first big appearances was as the face of Fenty Beauty in the Super Bowl LII commercial for Rihanna’s brand. Saweetie was also the first musician to launch a collection with Morphe who previously partnered mainly with makeup artists like Jaclyn Hill, Manny MUA, and James Charles. For Morphe, Saweetie was the perfect celebrity partner as a musician who often does her own makeup and grew up learning the artistry of the field from her mom and aunt. Style and beauty are two product segments that Saweetie loves, and her strategic partnerships in these spaces demonstrate how she works with companies that fit her personal brand.

The Quay To Success

Saweetie’s most recent big, strategic partnership is with Quay Australia, a chic but affordable sunglasses brand that rivals the style and quality of high-end brands like Ray-Ban, Prada, and Versace. Her line consists of twenty-four sunglasses and blue light frame designs that give the essence of luxury without breaking the bank. Saweetie knows the importance of confidence to her fans, and her partnership with Quay offers glamour at a reasonable price. Saweetie’s brand deal with Quay includes influential social media posts, billboard advertisements, and a custom verse in a song off her upcoming album.

Not only is Saweetie keeping it stylish with her Quay brand partnership, but she is using this campaign as a force for good as we previously mentioned. With Saweetie’s help, the Australian brand is bringing back their Education is Quay scholarship program to donate $100,000 in tuition relief. As a college graduate who worked hard to pay for tuition, Saweetie knows exactly how girls striving for success feel when money gets tight. This philanthropic side of Saweetie gives her another attractive edge for companies looking to partner with her. 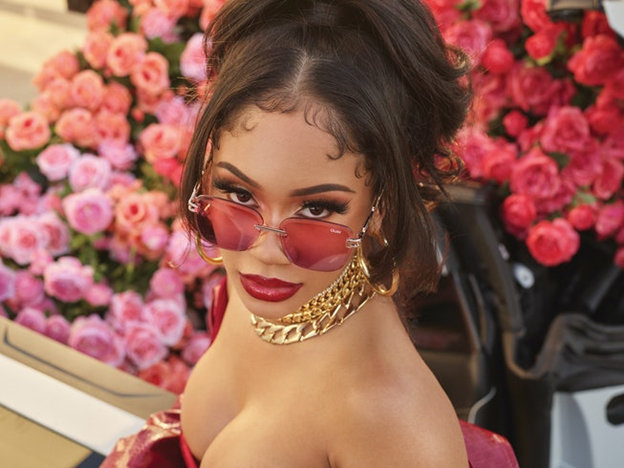 Being An ICY GRL Boss

One of Saweetie’s trademarks is to be her own boss, and this mentality comes through not only in her music but also in her brand partnership experiences. She has always claimed to be a “hands-on” artist, whether that is on the creative side or business side of her fame. The term “icy grl,” coined by Saweetie herself, represents who Saweetie is and what her fans want to emulate: a female go-getter. That is why she partners with brands that match her vibe and are willing to let her be a part of the decision-making process.

Saweetie clearly has the creds that make her an important celebrity influencer, but she has cultivated a brand image of her own that sets her apart from other hip-hop artists. This girl boss attitude sets up Saweetie as a role model and style icon for young women looking to work hard to achieve success in whatever field they desire. Fashion and beauty brands have already taken the step to partner with Saweetie because of the way she markets herself on her platforms to inspire and help others. She is definitely a celeb to watch in the coming months and years as more brands team up with this star to take over pop culture partnerships. 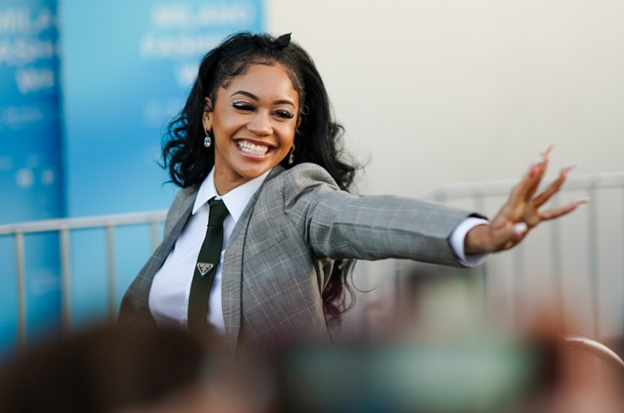 Celebrities like Saweetie have that perfect mix of qualities that brands are looking to partner with. Check out some of the Hollywood Branded blogs listed below to learn more about celebrity partnerships and how they can help boost a product or brand’s success.