How Starbucks Holiday Cups are Good Marketing for Starbucks

The holiday season is the perfect time to indulge in decadent food and go over the top with decorations. Stores are starting to release their seasonal food and drinks trying to help get their brands into the holiday spirit.

One popular chain store has just released their new holiday cups, which typically get some pretty great social media attention.  Each year Starbucks comes out with their new festive cups just in time for the holidays. In this blog, Hollywood Branded discuses how Starbuck’s holiday cups are key to good social media marketing and beneficial way of marketing their brand. Past Holiday Cups
Since 1997 Starbucks has revamped their cups for the holiday season and they get more creative with each of the designs. Each of the cups in the past has been red with a simple holiday design on them to get consumers in the Christmas holiday  mood.

The most controversial cup was the solid red cup in 2015, as many people thought it was not “festive” enough. When the red cups first were released, Starbucks was not prepared for the initial onslaught of negative reactions from consumers. They were upset over the solid red cups and calling Starbucks “Jesus haters” and saying Starbucks wanted a war on Christmas, blowing things out of proportions. Starbucks then release the statement saying that the red cups represent a different Christmas story for everyone. 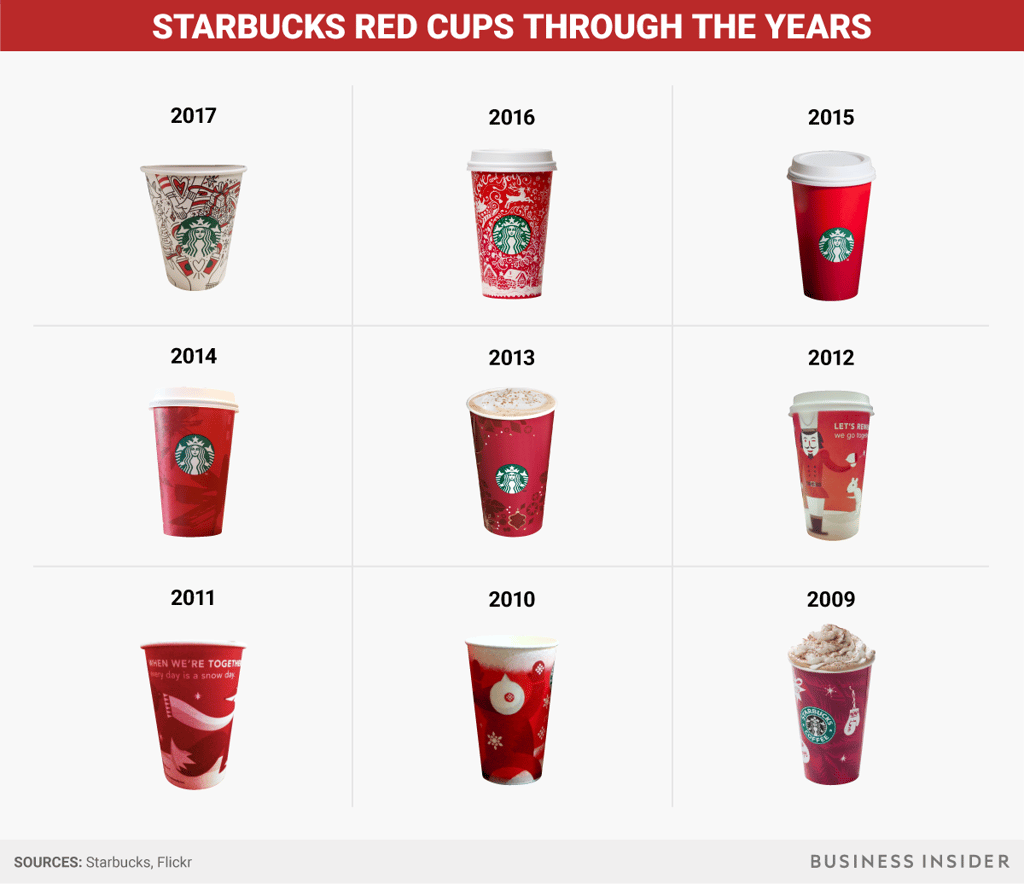 The next year Starbucks seemingly learned their lesson, and released some very festive cups just in time for the season. In 2016, they released a red cup with Christmas inspired doodles drawn by different artists.

Starbuck fans look forward to the holiday cups every season and when they are released there is a slight frenzy over them. Fans post pictures of their cups all over social media, displaying the temporary holiday cup on every digital media platform. Posting pictures of your Starbucks holiday cup have become the trendy thing to do and even celebrities are getting on the bandwagon -- without being paid to do so. Having these festive cups is another excuse for people to post photos of their coffee cups on social media influencing all their followers to go out and get some Starbucks.

All the submissions were posted on social media for everyone to see. Starbucks received over 1,200 submissions and picked 13 designs from six different countries. This was a smart move on Starbucks part because not only did you have to purchase Starbucks to submit your art, but you had to post about it on social media, allowing all the contestants’ followers to see (and judge) their work of art and of course, put that that infamous Starbucks logo front and center.

That's a lot of (free) artistic ideas too! 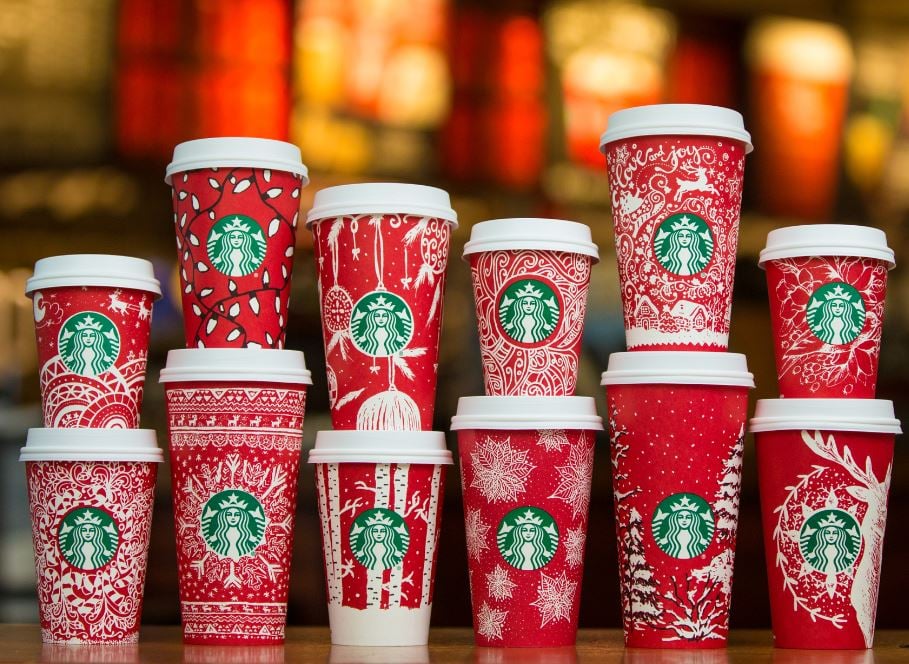 This year Starbucks came out with a cup designed by Jordan Kay who according to her bio is a Seattle based (how perfect for the Seattle-based Starbucks) graphic designer & illustrator known for her ink illustration of Classical Hollywood starlets, floral patterns & retro typography style.

The colorful doodles caught customers eyes and intrigued many. Within weeks, customers started to notice -- and posted -- that the two holding hands on the cup were very feminine, which led to some referencing the new Starbucks cups as being homosexual in nature. This sparked another controversy.

However, when when the cups were first released Starbucks managed to prepare for this leap of an assumption by their telling press that the hands only signify unity, and that they do not have a gender assigned to them.  Having a pre-emptive crisis plan in place is a topic we address in our blog: Not Having A Public Relations Plan In Place. 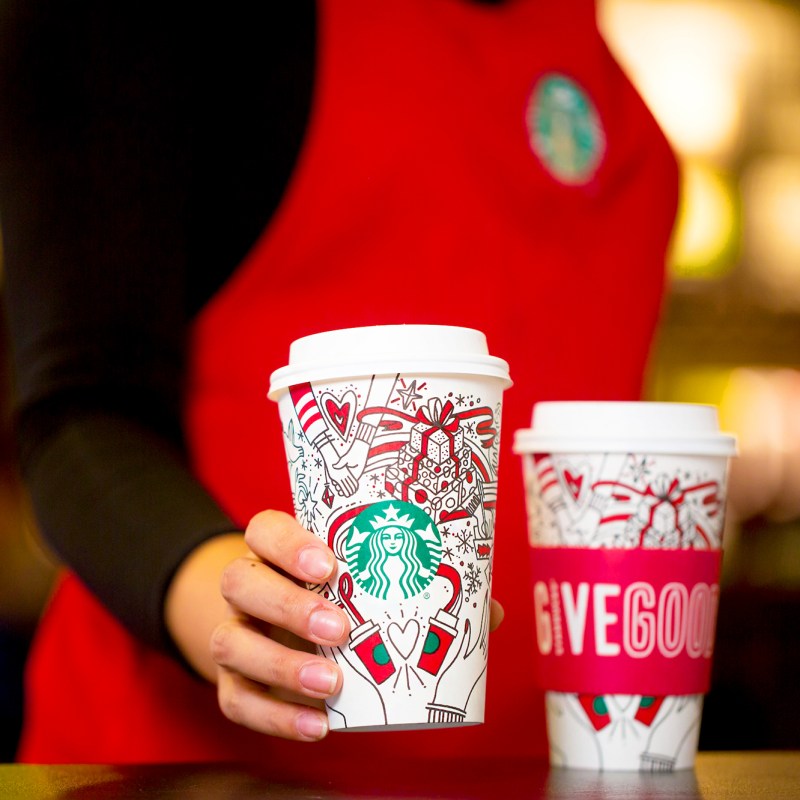 Starbucks has set a major social media trend each year by the act of just creating a holiday cup.  Imagine what your brand can do to stand out and do something special -- just with some packaging changes.  Over the years Absolute vodka commissioned artists to create unique bottles, and other brands have leveraged backstage events at film festivals or Hollywood award shows to have artists help custom design product packaging to raise moeny for charities.

The potential is there for your brand to create a way to stand out and get some extra PR and social media attention!  Starbucks Holiday cups are a fun way to kick off the holiday season. The next time you post about your festive holiday drink, keep in mind how you’re benefiting Starbucks marketing in a big way.

Check out the various events your brand can get involved in for potential celebrity and influencer interactions in our Hollywood Event Guide for brands.