Stella Artois has become a big name both in the fridge and on screen, particularly with its notorious Netflix deal. In its latest "Host Beautifully" ad campaign, the Anheuser-Busch subsidiary is trying to claim an unconventional market for beer: the upscale foodie type. Read on for a look into how two key entertainment marketing practices are supporting this strategy. 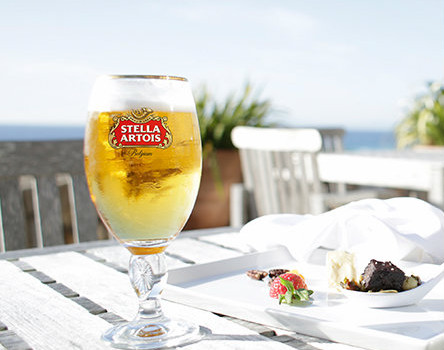 When it comes to food pairings, beer might be the new wine. Budweiser previously brought to light the natural pairing of beer and burgers, which benefited the sales of both the bud beverages and restaurant burgers while tempting the taste buds of viewers everywhere. Now, another branch of Anheuser-Busch InBev is affiliating with the more attentive and refined food palate. In addition to ads like the one below, Stella Artois is reaching out to celebrity chefs and "classier" personalities, as well as creating an online guide to hosting beautifully, connected with influencers from the foodie blog world.

One of the surefire ways to promote a brand image that will be immediately understood is to tie the brand to a celebrity and creating a celebrity ad campaign. Rather than going the traditional route of matching a beer brand up to a football player, sitcom husband, or overtly sexy female, Stella Artois is recruiting celebrity chefs and stars of fashion and music (including John Legend) to support the tie between the beer brand and the idea of hosting beautifully.

The online component of this ad campaign includes an A-Z complete guide of party tips along the theme of hosting beautifully. Stella has reached out to the top foodie and chef bloggers as promoters, in addition to bringing the celebrities and chefs into individual posts. Each letter of the alphabet corresponds with a theme; "ambiance" features a John Legend cameo and playlist, while "bon vivant" provides recipes from celebrity chef Aliya LeeKong. The "Host Beautifully" guide will be promoted through bloggers, social media of both Stella and social influencers, and paid Instagram placement.

With this, the Stella Artois brand aims to gradually become more synonymous with modernity, creativity, versatility, and class. It has already seen sales spikes from the campaign (13.7% in consumer sales over 12 months, excluding bar and restaurant purchases). What remains to be seen is whether the demographics of customers, types of bars/restaurants, and types of placements and integration change as Stella Artois strengthens its gourmet identity.

Be sure to check our previous blog article detailing the impact online influencers can have on your ROI.