The Super Bowl is just around the corner, and if you’re not excited about the big game itself you’re likely excited to see the plethora of ads that are to be rolled out by big brands in a bid to resonate with one of TV’s biggest audience reach of the year, and ultimately garner perhaps some of the biggest brand awareness possible. Super Bowl ads are a vital component of the game, and brands have been upping the ante each year in hopes that their ad will become a talking point for weeks, months and in some cases years to come!

The 2015 Super Bowl is no exception, with :30 second ad spots during the game carrying a $4.5 million price tag, a hefty price to pay for such a short moment in time, but a massive audience of over 100 million! This price tag, however, is not off putting for big brands that are comfortable enough to build their advertising budgets around such advertising opportunities. And even some smaller brands like Loctite who spent their entire YEAR's marketing budget on a single ad.

But what about the smaller brands who want to get themselves noticed during the Super Bowl adapalooza? 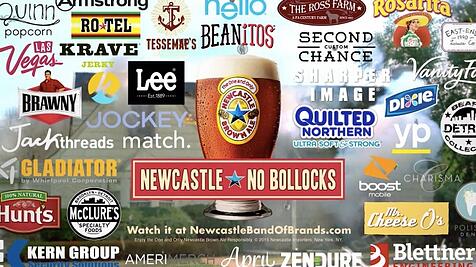 Arguably, smaller brand advertising is pushed out of the running for Super Bowl advertising spots as they’re beaten out by the heavy weight brands. Newcastle Brown Ale’s newest ad campaign has a plan to change the ad bidding game for the small scale brands – giving them an opportunity to play with the heavy weights during the excitement - not in - but around the big game.

Inspired by the success of crowd funding techniques as a way of raising money to make projects a reality, Newcastle Brown Ale has created the Band of Brands campaign.

Crowd Funding To The Rescue, For Advertising?

Crowd funding is a form of raising money that has become increasingly popular over the past few years. Many individuals and groups have used crowd funding methods to raise money for events ranging from traveling the world, to larger scale events like event organization and activation.

With Aubrey Plaza on board as Newcastle's sassy, non-conventional spokesperson, the brand successfully captures audience attention with its dry wit and straight to the point realism.

While the ad itself can’t actually run in the treasured Super Bowl ad spots, as the NFL won’t allow dual brands – not to mention dozens of brands – to share ad time, the social media alone is proving worthwhile to brand participants. With mega results! 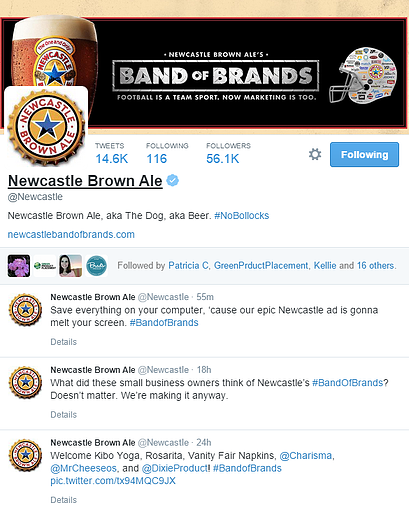 The Ad Campaign Is The PR Story

People have taken note about the innovative way Newcastle Brown Ale is executing this campaign through brand-to-brand crowd funding. That, in itself, is the PR story – more so than anything related to beer sales. You can view the Band of Brands official commercial here.  The full list of confirmed brands is listed here:

The end result is what one would expect from such a bespoke idea - frantic, but interesting. It’s not easy to throw 37 companies, including your own, into a commercial but Newcastle have managed to prove that their idea is both successful and a huge conversation starter. Watch the final masterpiece here, and let us know what you think!

Are you interested in learning more about product placement strategies? Download our "Product Placement 101" infographic to learn more!