Targeted Advertising Techniques And Why They Are Effective

Targeted advertising has become a topic of controversy as many believe it is a violation of privacy and that it should be illegal for businesses to cyber-stalk them. However, from a theoretical standpoint it could be mutually beneficial to both businesses and consumers. In this blog, Hollywood Branded delves into targeted advertising techniques and why they are effective. 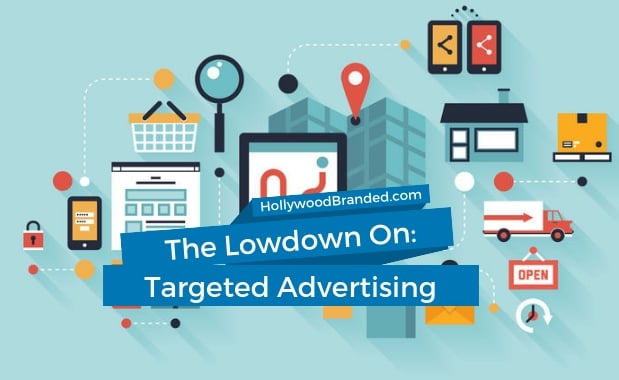 Targeted Advertising Is The Future

Projected to double in advertisement budgets from 2018 to 2020, Instagram has reached a level of unmatched engagement with audiences 13-34.  Instagram is part of Facebook Inc. apps, which uses the same algorithmic practices to cater uber-specific personalized advertisements to users.

The technology of targeted advertising feels futuristic, something many have trouble coming to terms with. Understandably so, it can easily feel like a violation of privacy. However, with younger technology-welcoming generations, this will likely become a standard (and preferred) practice in advertising.

The technology at its core, is innovative and should theoretically be favorable to users. Comparative to receiving ads on your social for brands you have no interest in, targeted advertising suggests items you actually may want, or have been talking about. A growing percentage of millennials complain about advertising because they find it bothersome, which could simply be the result of irrelevant ads.

The question of relevancy is understandable. For example, a Pampers Diapers ad would likely be annoying to anyone who didn't have a baby, and from a business perspective, Pampers would not want to waste money on ads that don't reach their target audience.

The Power Of Prediction: Complex And Evolving Algorithms

The way in which Instagram, Facebook and Amazon so successfully find their target audience is through extremely complex algorithms. This can be compiled through past internet searches Google has stored, where your email address is registered (services or stores), what you search while logged into these accounts, and credit card companies knowing what you buy.

From all this data, these algorithms can predict what you will want in the future. Take Dan Nosowitz, freelance food writer and editor, who was scrolling on Instagram when he saw an Amazon sp 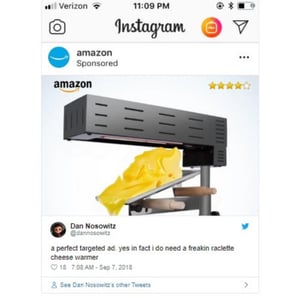 He took this with humor and brought the ad to twitter. “I had to click through because I had no idea what it actually was, finding out that an algorithm believed I would be interested in a discount ‘traditional Swiss-style electric cheese melter’ is sort of comfortably bumbling.”

As a food writer, Nosowitz had most likely searched other food related items on Amazon. While he has never heard of the raclette melter before the ad, it shows the predictive power of the algorithm.

It was also ultimately successful in that it caught his attention, he ended up clicking through the ad and learning more, as he explained above. The internet will soon know what you want, before you even know you want it.

To make a long story short, targeted advertising works great - as long as it doesn't come off as intrusive to consumers. According to a number of studies conducted at Harvard Business School, consumers were much more likely to engage with a targeted ad when they knew more information about where it was coming from.

Facebook recently developed a feature attached to all of its ads: "Why Am I Seeing This?" Anyone can click on the upper right hand corner of an ad and see this option on a drop-down menu. When they select it, Facebook provides them with a basic explanation of why they were chosen to see the ad, shown below. 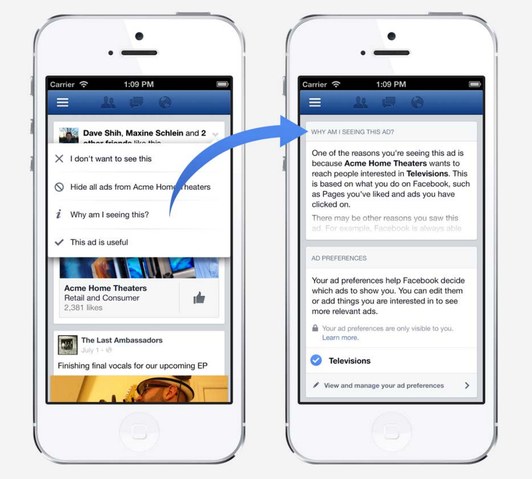 Users respond understandably well to this; it takes the mystery out of these seemingly psychic ads. In relation to this, advertisements that appeared with the statement "Recommended based on your clicks on our site" underneath the image, performed significantly better than those without.

One experiment tested 348 subjects by showing them an ad about an art gallery, and either a message stating they were shown the ad based on "your information that you stated about you" or "based on your information that we inferred from you". Ads shown with the latter message were 17% less effective.

While transparency undeniably helps resolve many consumers cognitive dissonance, it only works if they are happy with the technique in which they were reached. The issue is that sites often use unsettling approaches, such as inferring things about consumers.

The Psychology Behind Consumer Ad Behavior

Advertising can be compared to real life behavior and real-world social behavior standards. Making assumptions about people is often taken with offense, even if it refers to a fact that the user would freely disclose on their own accord. Inferring that someone would be interested in weight loss programs would generally be seen as inappropriate, even if that person is interested in losing weight.

Similar to this, when businesses track user activity across websites it is can be compared to talking behind someone's back and leaves the consumer with an uneasy feeling.

That being said, standards of social practice as well as transparency are something that is rapidly changing and constantly evolving. Younger generations are growing up comfortable with sharing more and more of their personal information with technology believing it is in their advantage - which it very well might be, who knows?

For more on social media and the power it has as a platform for advertising from Hollywood Branded, check out a few related articles below:

Want to learn how improve your own digital marketing game for your brand? Enroll now for free in our social influencer marketing course!